“We Catch the Flame” by Hafsa Faisal ... American science fiction and global fantasy inspired by the ancient Arabian Peninsula

The young Sri Lankan American writer Hafsa Faisal presents a new paradigm of fictional youth literature in a world of fantasy that challenges preconceptions and Eurocentrism that have imposed themselves on literary imagination. 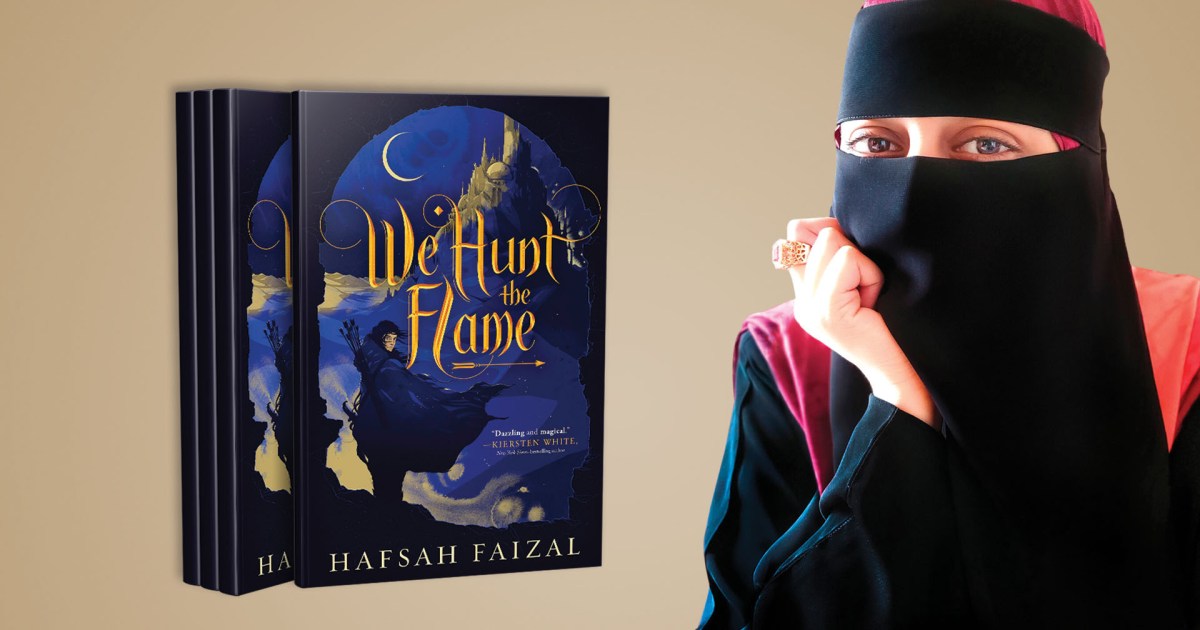 Readers of Western fiction and fantasy literature are accustomed to a familiar color of fictional worlds inspired by a specific historical inspiration - mostly European - such as the one presented by the series of novels "The Song of Ice and Fire", which turned into a popular movie series and included dragons, kings, swords, and power struggles, but a new "Western" novel It became on the New York Times bestseller list (ranked 5th for adolescent literature -2019), presenting the reader with fictional characters inspired by the ancient Arabian Peninsula.

In "We hunt the flame" by American writer and author of adolescent novels Hafsa Faisal (28 years), the young writer presents a fictional tale set in the worlds of fantasy where a hunter named "Zafira" disguises himself as a man in order to travel to a forest Dangerous Cedar, lives magical adventures in epic worlds of ancient kingdoms, jinn, magic, myths, death and darkness.

Although the writer is of Sri Lankan origins, she chose the ancient Arabian Peninsula as a scene for the events of her novel, and the idea of ​​writing the novel came to her after she was well acquainted with the literature of young people to present - later - her own and different experience.

In the novel, the protagonist of the novel is pursued by Zafira, the murderous son of a power-hungry sultan, who is sent to arrest the "legendary hunter" and recover his father's artifacts, while Nasser struggles to cling to the last remnants of humanity, his path intersects with Zafira, their conflicting fates intertwine and pit them against An ancient evil with greater powers and more deadly than either could imagine.

Join award-winning and bestselling author @hafsahfaizal for a brilliant event on the upcoming continent-hopping #ScotFriendlyBookTour!

Hear more from Hafsah here, and make sure you sign up to join the event with your S3–6 classes!

The fairy tale takes place in the mythical kingdom of Arawa, where war is brewing and a frightening forest swallows the earth in the shadows.

The novel gains its literary value from being a construction for an imaginary world that corresponds to reality, and carefully placing the dramatic plot within this world drawn with words, and this is what prompted literary critics to compare the novel with George Martin’s amazing fictional epic turned into the series "Game of Thrones."

In her interview with the American magazine, Publishers Weekly, Faisal says that the real, real world has found its way into the narration through the subconscious, despite the novel revolving around strange worlds of fantasy, referring to the killing of innocent people in Syria with poison gas in a horrific way.

She added that she did not "have patience with poetry" and did not try to write it, but she was always a passionate book lover, as she wrote her first novels at the age of 17 years, while "We Catch the Flame" was her fifth novel.

Faisal said that publishing is a difficult industry to break into, noting that she started blogging in September 2010 on a journey that took nearly 10 years during which she monitored the publishing world from abroad, including marketing, advertising, publishing and preprinting dynamics.

Faisal considered that she is "part of a minority whose reputation is constantly denigrated and demonized in the media, which means that I am always concerned about the backlash because of my identity, but I am lucky because I am surrounded by really good and supportive people."

Asked if her novel was considered a political act, she said that she feels "comfortable mixing elements of Islam with fiction, however, I wanted to create a world that shows the Middle East as it is: home to thousands and thousands of people and not the diabolical and strange region depicted by fiction and the media."

In her article for the Tor science fiction website, Faisal wrote that she was the firstborn of religious Muslim immigrants. Her father was a Montessori teacher in a school, while her mother was a judo player. Her parents made sure that Islam was an essential part of their children's lives, along with familiarity with the latest aspects of culture. Popularity and fashion, "as much as one can be American," as she put it.

Faisal continued by saying that it is difficult for anyone to understand that her name was Arabic, and that her parents were born at a time when Sri Lanka was still under British rule. They speak a Sri Lankan language with each other but speak English with their children, adding, "Understanding means accepting the truth." That people may have connections to many countries, languages ​​and cultures. "

"When I grew up, I started wearing the niqab like my mom, after years of begging her to give me a black veil of my own, and months later we left lively Los Angeles and returned (again) to Florida because of my father's job ... in the city where we lived, she was not," she added. Schools are suitable for a veiled girl like me, so I started homeschooling. "

She has favorite quotes tagged with color-coded post it notes 😆 @ hafsahfaizal @panmacmillan pic.twitter.com/jKJ5qd1myL

And about her novel, she said that while she was writing the first draft of what would eventually become her novel, she could not get past the first chapter despite there being no apparent error. She was writing a young adult fiction about a teenage girl who challenges the status quo in a fictional world centered around Europe like most fictional works that address Young men in contemporary times, before the novel’s scene of events shifted from Europe to the Mediterranean world.

She continues to say that when she contemplated the map, her eyes shifted south towards the Arabian Peninsula and there the story began, where she wrote a story "not fed by terrorism and forced marriage, where the heroine is a girl who knows incense and the difference between dates, while the hero is a boy who understands the beauty of the moon and realizes the sense of language on his tongue." And when their names are difficult to pronounce for other readers, it is a reminder of how different they are. "

Nevertheless, Faisal said that her next narrative manuscript may be a little closer to her personal roots with characters of Sri Lankan origin, and the next work will be closer with an American Muslim hero. Rather, I just wanted a story ... an adventure ... I wanted a new normal, so I gave it to myself. "

When Faisal began writing the novel and set the stage for it in the Arab world, she knew that making her readers feel at home is crucial.

That is why I was keen to scrutinize the description of Arab clothing, decoration and food, to express to the reader the boundary space between the foreign and the familiar.

Thus, the novel became close to the Arab reader's expectations of his usual place, while non-Arab readers who are bored of "European Central Illusions" can find relief and a difference from the usual.