More than thirty "vaccinodromes" should soon be operational in France to give a boost to the vaccination campaign. France 24 went to the one installed m… 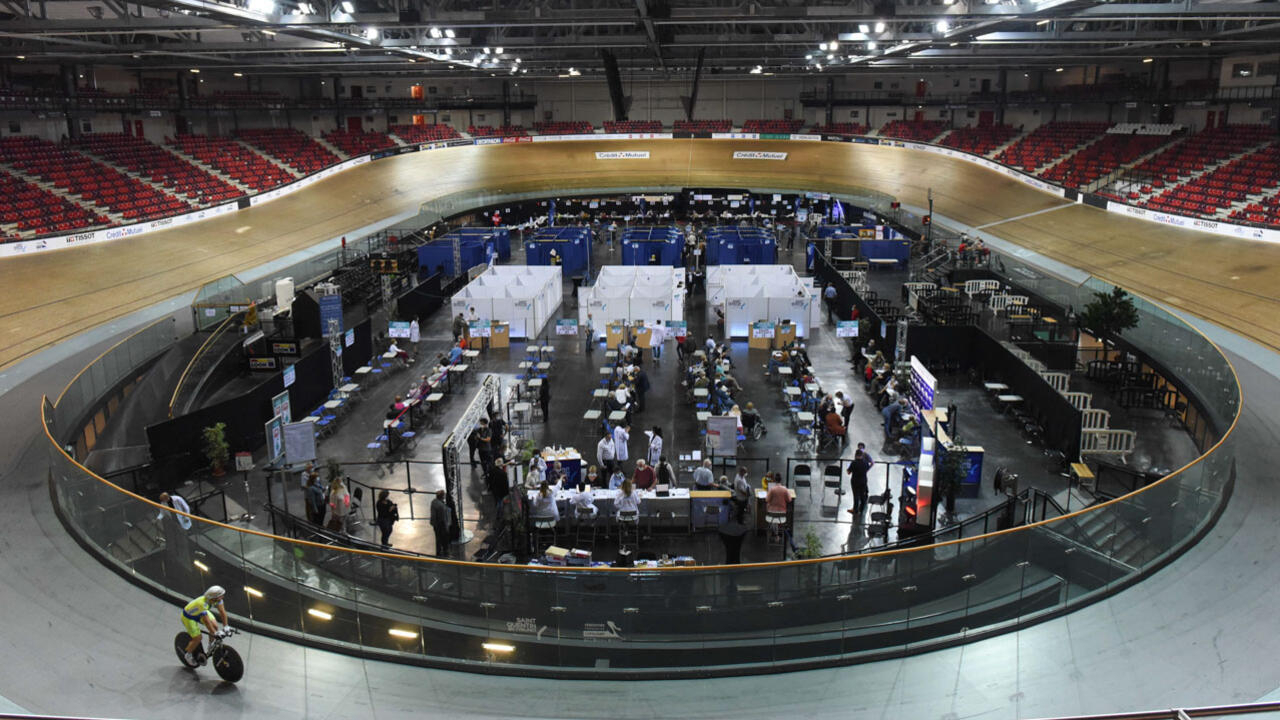 The encouragement of this man on a motorcycle is directed to the sprinters of the French cycling team, who train on the track of the velodrome of Saint-Quentin-en-Yvelines.

The bursts of voices could just as well be addressed to the nursing staff who vaccinate in turn in the space installed below in the middle of the track.

Welcome to the giant vaccination center in Yvelines, south-west of Paris.

This vaccinodrome foreshadows what will be the government's massive vaccination policy, which plans to open at least 35 megacentres of this type across the country to reach the goal of ten million first-time vaccinated by mid-April.

On the day of France 24's visit, Wednesday March 31, nearly 1,600 people received a dose of Pfizer / BioNTech or Moderna vaccine.

A daily figure which represents more than three times the number of doses injected each week on average in conventional centers.

A sign indicates the number of doses injected since the opening of the vaccinodrome in the velodrome of Saint-Quentin-en-Yvelines.

Among those vaccinated today, most had made an appointment in due form on Doctolib, a site that allows you to book medical appointments online.

Others, like Nicole Lalau, had received a phone call from their local elected officials offering them to be vaccinated.

"I am a big fan of Dr Raoult and, initially, I did not really want to be vaccinated. But when my mayor called me to offer me this meeting, I accepted immediately. .. Mainly because I can't wait to be able to come out freely, ”explains the 74-year-old lady, from a small town near Versailles.

Nicole Lalau, 74, is vaccinated at the Saint-Quentin-en-Yvelines velodrome on March 31, 2021. She is very satisfied with the speed of the process, around forty minutes between entering and leaving the vaccinodrome.

Raymond Vericel, a 74-year-old former inventory manager, had less luck with his mayor.

"I tried several times to get an appointment on the Internet but everything was complete. The town hall of my town only referred me to Doctolib", explains the retiree.

He eventually had to do it several times to get a vaccination window.

First an interview in a white box with a doctor, who checks for possible contraindications and issues a certificate of eligibility for vaccination according to government criteria.

The dose is usually injected by a nurse in a blue box.

Last step, registration in the Ameli system of Social Security, as well as confirmation of the appointment date for the injection of the second dose.

Vaccination candidates line up in front of the entrance to the Saint-Quentin-en-Yvelines velodrome, March 31, 2021. © Mehdi Chebil

The course was organized so that the fifteen doctors and fifteen nurses present on March 31st can complete their task as quickly as possible.

The administrative staff who run the vaccinodrome come from the twelve municipalities that make up the agglomeration of Saint-Quentin-en-Yvelines.

"Our objective is to inject en masse, but also to avoid an unfair social sorting. This is why we work a lot with the CCAS (communal centers of social action), which bring us people who cannot not make their appointment themselves ", explains Sandrine Hector, public relations manager of the agglomeration.

To maintain a cruising speed of 1,500 to 2,000 doses per day, nurses take turns in the pharmacy area to transfer the precious vaccines from the vials to the syringes.

Their colleagues in charge of injections parade just in time to "claim their dose".

It's in this buzzing beehive atmosphere that the preparers strive to get the most out of every vial: up to seven doses from a Pfizer vial, up to 12 doses from a Moderna vial.

It is the nerve center of the vaccinodrome, where caregivers constantly parade to retrieve doses to be injected.

Vaccine bottles are the real ammunition in this health war against Covid-19.

They are sheltered in refrigerators located in a room where the person in charge of the vaccinodrome, Tristan Eybert, keeps the keys preciously.

"In general, we receive the vaccines for the day after tomorrow. The important thing for us would be to have as regular a supply as possible to adjust the appointments and the logistics upstream", explains the manager, who works for the agglomeration of Saint-Quentin-en-Yvelines.

However, a new increase in power to reach the objective of 5,000 injections per day seems possible to him.

"We could start by playing on the amplitude of the opening hours and vaccinating late at night, which would be imaginable with younger audiences," explains Tristan Eybert.

The number of nursing staff and doses should then follow.

Two areas in which the stars are aligning.

They are all numbered to allow precise tracking of stocks.

Human reinforcements should arrive since the government has announced the mobilization of firefighters and soldiers alongside the large categories of caregivers already authorized to vaccinate.

As for "ammunition", France will receive throughout the month of April two million weekly doses of the Pfizer / BioNTech vaccine.

A boon for the staff of the vaccinodrome, who are regularly confronted with mistrust of the AstraZeneca vaccine.

"When we tell people that we are going to vaccinate them with Pfizer, we see their faces light up," says Sandrine Hector.

"It's a bit like giving them a great Chablis instead of a classic white wine!"

Raymond Vericel poses for a photo near the exit after his vaccination.

"We meet kids on our stairs whose class had been closed because of the Covid ... it's reassuring to be vaccinated," says the 74-year-old retiree.