The 4th Anniversary of the Establishment of Xiong'an New District: The “City of the Future” is slowly spreading out

China News Service, Xiong'an, April 1st. Title: The fourth anniversary of the establishment of the Xiong'an New District: The “City of the Future” is slowly spreading out   China News Agency reporter Lu Da Chen Lin Cui Tao   The construction site in the Rongdong area is full of tower cranes, rolling wheels, blue waves of Baiyang Lake and green willows reflecting the lake. Blue and green are in 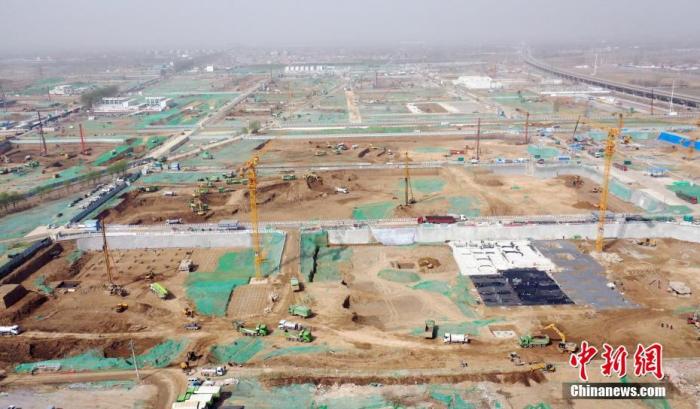 China News Service, Xiong'an, April 1st. Title: The fourth anniversary of the establishment of the Xiong'an New District: The “City of the Future” is slowly spreading out

The construction site in the Rongdong area is full of tower cranes, rolling wheels, blue waves of Baiyang Lake and green willows reflecting the lake.

Blue and green are intertwined, and the city of water is in harmony. At this time, the Xiongan New District is full of spring tides, and the picture of the "City of the Future" is slowly spreading.

On April 1, 2017, Chinese state media announced to the outside world the decision to establish the Hebei Xiong'an New District.

This is another new area of ​​national significance after the Shenzhen Special Economic Zone and Shanghai Pudong New Area. It is a millennium plan and a national event that has attracted attention from home and abroad.

The large-scale construction of Xiongan New Area is speeding up in an all-round way, and more than 120 major projects are being advanced simultaneously, preparing for the orderly undertaking of Beijing's non-capital functions.

The picture shows aerial photography of the construction site in Rongxi area of ​​Xiongan New District.

When the Xiongan New District was established, Yang Weidong, who had just been working for more than a year, came here from Chongqing.

He hopes to participate in the construction of Xiongan New Area, and is now an employee of China Xiongan Group.

Planting greens first and then building a city is the new concept of construction here.

Yang Weidong still remembered that he started planting trees soon after he arrived.

Together with many builders, he planted the first tree in Xiulin in a thousand years.

Although every tree has an "identity card", it still took him tens of minutes to find the tree from the forest with the help of the information and positioning provided by the big data platform.

Looking at the good-looking Chinese pine, which is more than 2 meters high, he sighed "Time flies too fast". It has been four years in a flash.

And they also planted 410,000 acres of trees, which is "a sense of accomplishment."

Not far from this forest is Baiyangdian, the "Pearl of North China".

After treatment, the water quality of Baiyangdian Lake improved from Grade V to Grade IV in 2019, and continued to improve year-on-year in 2020. The water quality in the center of the lake is Grade IV, reaching the best level in the past decade.

Wang Yongli, who grew up in Dianzhong Village, returned to his hometown after many years of managing aquatic products in Beijing.

He said that the water in Baiyangdian Lake was cleared, there were more birds and fishes, and the villagers' awareness of environmental protection had also increased. Now the household garbage and sewage in the village will be treated specially.

This year, construction has been accelerated in an all-round way, and 160,000 builders are under intense and orderly construction.

As a pilot demonstration area, there are many tower cranes in the Rongdong area, and different types of construction vehicles are constantly coming in and out, and water trucks are working closely.

At the RDSG-4 bid section of the pipe gallery in Rongdong area, the underground pipe gallery has been capped, and the municipal road above is under construction.

Staff Han Yudong said that this underground pipe gallery is 930 meters long, with a logistics channel on the east side, and pipeline cabins with different functions such as energy tanks, hydronic tanks, and power tanks on the west side.

After the logistics channel is completed, it can drive two-way two-lane unmanned logistics vehicles.

A few days ago, Zhang Guohua, member of the Standing Committee of the Hebei Provincial Party Committee, Deputy Governor, Secretary of the Party Working Committee and Director of the Management Committee of the Xiongan New Area, said that the Xiongan New Area has shifted to a stage where large-scale development and construction and undertaking functions are relieved. The new area will promote the implementation of the project in strict accordance with the plan. , Keeping in mind the "initial intention" of undertaking Beijing's non-capital functions, speed up the formation of a new image, build new functions, develop new industries, gather new talents, and build new mechanisms to show its prototype and image as soon as possible.

The builders of the China Construction Eighth Engineering Bureau in the third bid section of the Xiong'an Business Service Center project are under construction.

Located in the hinterland of Beijing, Tianjin and Baoding, Xiongan New District, 105 kilometers away from Beijing and Tianjin, has obvious geographical advantages.

As Beijing's non-capital function deconcentration center, it must be built into a high-level socialist modern city, an important pole of the Beijing-Tianjin-Hebei world-class urban agglomeration, a new engine of a modern economic system, and a national model for promoting high-quality development.

Many cars with Beijing license plates are parked in the parking lot outside the Citizen Service Center.

People who work and do errands need to change to electric buses to enter.

In about 5 minutes, a passenger car with a capacity of 30 passengers was almost full.

In the working hall on the first floor of the Government Service Center in the southwest corner, most of the more than 30 windows are handling matters.

On the electronic screen at the entrance, the words "Do It Now, Really Do It," are eye-catching.

In the "Xiongan Entrepreneurship Living Room" next door, 3 to 5 people are chatting in a low voice at a table.

At present, Beijing's investment source companies account for more than 80% of the registered companies in the Xiong'an New District.

Opposite the government service center is the business service center under construction, which is expected to be completed by the end of June this year.

After completion, it will provide transitional supporting services for the construction of Rongdong area, start-up area, etc., and provide an initial office location for undertaking the relief of Beijing's non-capital functions.

Chen Jianliang, who participated in the construction of the project, said that in the past, he worked in a local garment factory. After the establishment of the Xiongan New District, more and more Beijing enterprises have settled in Xiongan, providing more job opportunities for locals.

Zhang Guohua, who asked to strengthen the service consciousness of "shops and small two", said that Xiong'an will make a big article of "building a nest and attracting the phoenix". It is necessary to comprehensively create a hard business environment with good image, strong functions, and excellent supporting facilities, as well as marketization, rule of law, and An international soft business environment.