Sitting in the yard of her home in the Gaza Strip, Iman Al-Qidra wraps her baby Mujahid in a thick white blanket, and says that he will not grow up in the custody of his father, who is imprisoned in Israel, whose sperm she secretly took from prison to bear it. For years, Palestinian women have been smuggling their husbands' sperm from Israeli prisons 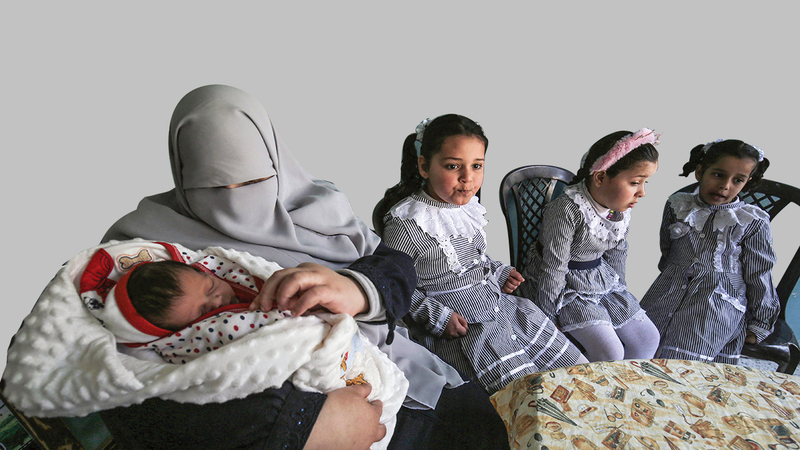 The Occupation Prisons Authority claims that the smuggling operations are pure "rumors."

Sitting in the yard of her home in the Gaza Strip, Iman al-Qidra wraps her newborn Mujahid in a thick white blanket, and says that he will not grow up in the custody of his father, who is detained in Israel, and whose sperm was secretly taken from prison to bear it.

For years, Palestinian women have been smuggling their husbands' sperm out of Israeli prisons, and using them in a process in which an egg is combined with a sperm outside the body, and then undergoes fertilization with it in order to become pregnant.

The husband of Iman Muhammad al-Qudra, who was arrested during the Israeli war on the Gaza Strip in 2014, is serving an 11-year prison sentence for his membership in the military wing of "Hamas" movement, according to his wife.

Muhammad escaped with another Palestinian detainee, who was released from a prison in southern Israel, with sperm in a small bottle.

The released prisoner transferred the sperm from the prison through the border crossing controlled by Israel and subject to strict security restrictions, according to Eman.

In the besieged Gaza Strip, fertilization began amid anxiety awaiting the result of the operation, as many attempts were unsuccessful.

A reproductive health specialist at Toulouse University Hospital, Louis Bogan, told «AFP» that it is «reasonable» that the sperm remain alive during this trip, regardless of the conditions of cooling.

But he adds, "It all depends on the quality of the sperm in the beginning," pointing to the possibility of keeping the semen alive in a container or box for more than 24 hours.

In 2020, after three attempts, Iman became pregnant and it was five years since her last visit to her husband in detention.

"I was afraid that I would grow up and not be able to get pregnant again after my husband's release," she says, surrounded by her three daughters, who gave birth to them before his arrest.

"I wanted a male baby," she added, which was allowed by the fertilization process.

The mother underwent fertilization at the hands of a specialist in the Gaza Strip, Abdul Karim al-Hindawi, who had previously performed several fertilization procedures for sperm smuggled out of detention centers.

"Some women get the sample from the husband in one way or another," Al-Hindawi says. "Sometimes they put it inside a pen or a small capsule."

He adds: "The sample is stored in a special center for freezing sperm, and there are several centers in Gaza, and (...) are used after a while, after preparing the woman for implantation or for the IVF process."

The cost of each attempt to fertilize is $ 2,000, which is considered a great sum for the people of the impoverished sector besieged in Israel since 2007, after the Hamas movement took control of it.

In the al-Qudra house in Khan Yunis, in the southern Gaza Strip, the walls were peeled off, and a picture of the husband in a military uniform and carrying a weapon hung on one of them.

Dalal Al-Zaben also appears proud of her role, as she is the first wife of a Palestinian prisoner in the Gaza Strip to have conceived through smuggled sperm, which is confirmed by the doctor who performed the operation on Ghosoun Badran.

She says, "I am very proud that I made life beautiful in the eyes of (the prisoners' wives) who did not have children."

"They have the right to be mothers," she adds.

Dalal, who lives in the northern Gaza Strip, says, “Salah al-Din met his father once when he was five years old, during his visit in the prison.

The father was able to see his second child, Muhannad, two weeks after his birth, on a previous visit.

Father Ammar Al-Zabin has been serving, since 1997, a life sentence for plotting attacks against Israel and on behalf of "Hamas".

Dalal recounts how her husband and his mother suggested an IVF procedure: "At the beginning, it was very difficult, how will pregnancy happen when my husband is not present?"

And she adds, "But when I came to the center and met the doctor and found answers to my questions, I agreed."

Before her husband's arrest, the couple had three daughters, and in 2012, she decided to experiment with IVF with the hope that she would have sons.

Most of these children came to life with the help of the Razan Specialized Center for Infertility and IVF in Nablus, where Dr. Ghusoun Badran works.

"Most of the women of the prisoners see the issue as a victory over the occupation, while the medical team is trying to distance themselves from politics," Badran said.

According to the doctor, the center does not accept fertilization procedures except for women who are somewhat old while their husbands are sentenced to long sentences.

The verification that the smuggled sperm belong to the arrested husband is extremely sensitive.

Badran says that "her consent to the operation is preceded by her request from four people, two from the husband's family and two from the wife's side, to sign a paper proving this before starting fertilization attempts."

"We do not know how they got it, and we are not asking them for any details," she added to Agence France-Presse.

According to the doctor Al-Hindawi: "In most of the cases I dealt with, no one asks for a DNA test to know whether the sample is coming from the husband or not. The samples are often sent with the wife or a relative."

A spokeswoman for the Israel Prisons Service, Hannah Herbst, told «AFP» that these smuggling operations are purely "rumors", as "we do not have information or evidence to support this allegation."

"We don't know how to extract enough semen and use it in a medical procedure," she added.

At this time, Iman clings to the hope that "despite the injustice, there is life that comes out of prison and life continues."

The Palestinian Prisoners Club estimates that 96 children were born as a result of smuggling sperm from the fathers of detainees in Israeli prisons.

From Israeli prisons, and use it

In a process during which an egg is combined with a sperm outside the body, then it undergoes fertilization in order to conceive.