The original boat in Lake Constance is recovered

People have been crossing Lake Constance for thousands of years. With rafts and wooden boats, in galleys and yachts. And with dugouts at the latest in the Bronze Age. A relic is now being recovered. 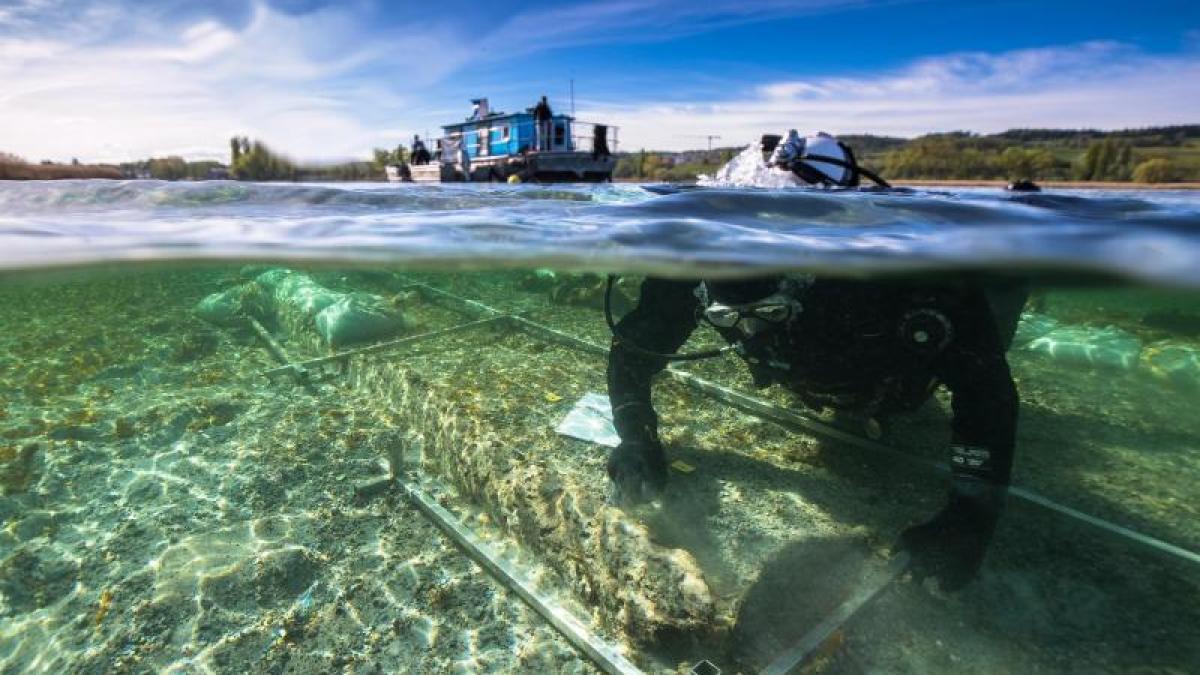 Konstanz (dpa) - During a tour with his stand-up paddle board, a man discovered the oldest boat on Lake Constance to date.

Around two and a half years after the spectacular find of the more than 4500 year old dugout canoe on the Seerhein, a tributary of the Rhine, the prehistoric wooden relic will be recovered in the coming weeks.

Researchers hope to gain new insights into the history of the primeval boat from the vicinity of Constance and perhaps even life on the water in the Stone Age and the Early Bronze Age.

“With the dugout canoe, we can be certain: the people were here.

And they used Lake Constance as a waterway and fishing waters, ”said the underwater archaeologist Julia Goldhammer on Wednesday of the dpa.

Dugouts are among the oldest watercraft known to man.

They were mainly used on lakeside settlements.

Experts estimate that the more than eight meter long dugout canoe from the Seerhein dates from the 24th to the 23rd century BC.

According to Goldhammer, no prehistoric Lake Constance settlements are known from the end of the Stone Age and the beginning of the Bronze Age, which once stood on stilts in the shallow water.

The relic of bygone times, also known as the original boat, is now carefully salvaged and restored and conserved by the State Office for the Preservation of Monuments over many years.

The bow of the Seerheiner dugout is no longer there.

Its trunk made of linden is 8.56 meters long and up to 81 centimeters wide.

"This makes the dugout canoe one of the most completely preserved prehistoric watercraft ever," said the Baden-Württemberg Ministry of Economics.

But it is a mystery why he sank into the lake at this point, said State Secretary Katrin Schütz (CDU).

Also three years ago, an oak dugout canoe was found and recovered in front of Wasserburg in the Bavarian part of Lake Constance.

While this was being taken out of the water in one piece, this is not possible according to the Ministry on the Seerhein.

"The wood is too fragile and too soft for this," said the Stuttgart District President Wolfgang Reimer (Greens).

The underwater archaeologists therefore proceed carefully with small shovels, among other things.

"You have to imagine it like a moist butter biscuit that dries," said Goldhammer, who is a wet soil archaeologist in Gaienhofen-Hemmenhofen (Constance district).

"It will then be quite fragile."

The dugout canoes, hollowed out like tubs, were mainly used in prehistory for the transport of goods, for fishing and as a means of locomotion.

"With a dugout canoe, you could travel long distances quickly and easily," explains Goldhammer.

"Back then there was a lot more forest and moor, and there were no roads, so the water offered itself."

Goldhammer and her colleague Heiner Schwarzberg from the Bavarian State Archaeological Collection assume that there will be numerous other dugout canoes in Lake Constance.

"Of course there must be more dugouts, there were dozens of stake settlements," says Schwarzberg.

Many specimens in the shallow bank area could already be destroyed by frost or fluctuations in the sea level.

The chances of finding are good, however.

"They are preserved in the silt and in the absence of air like bog corpses," says Schwarzberg, who examines the Wasserburger dugout canoe.

"That is why Lake Constance is also ideal for discoveries, because it does not fall apart that quickly there."

For this reason too, Lake Constance is a very valued research location among archaeologists.

There are known remains of more than 70 stake villages in the water and in the moor, which hunters and fishermen from the Stone and Bronze Ages built on the water.

More than 110 sites are part of the Unesco world heritage.

Instructions "How do I make a dugout canoe?"