(When learning is in progress) Red resources, Xi Jinping attaches great importance   [While learning is in progress] General Secretary Xi Jinping recently issued important instructions on revolutionary cultural relics, pointing out that revolutionary cultural relics carry the glorious history of the party and the people's heroic struggle, record the great history and moving deeds of the Chinese r 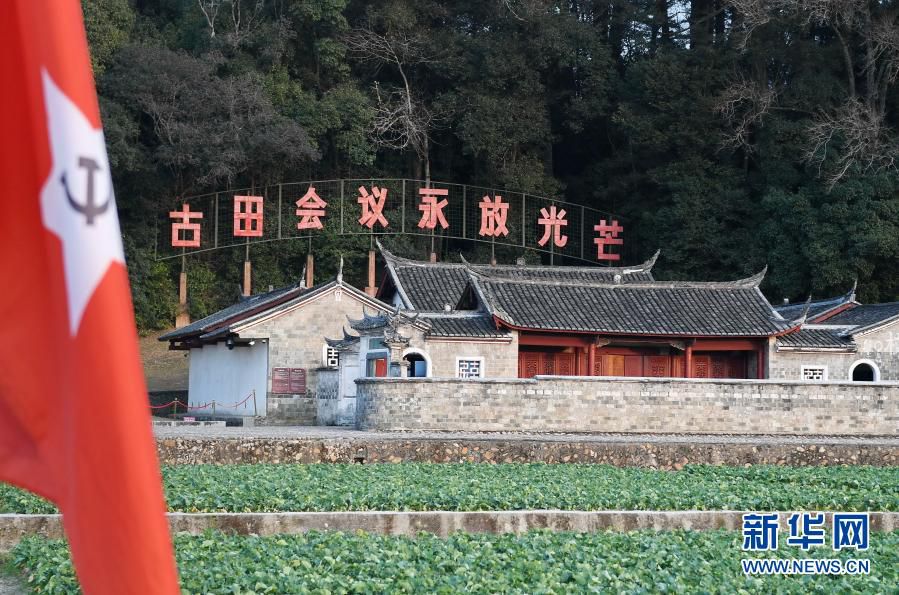 Since the 18th National Congress of the Communist Party of China, Xi Jinping has visited the revolutionary homeland and red hot land during local inspections, and has repeatedly urged to make good use of red resources and inherit red genes.

As a vivid teaching material for red education and a fresh carrier of red culture, Xi Jinping has always attached great importance to the protection and utilization of red resources.

Since the 18th National Congress of the Communist Party of China, Xi Jinping has visited the revolutionary homeland and red hot land during local inspections, and has repeatedly urged to make good use of red resources and inherit red genes.

The site of the Gutian Conference taken on January 25, 2021.

From March 22 to 25, 2021, Xi Jinping went to Fujian for investigation and research.

"There are many events in party history, red resources, and revolutionary ancestors."

During the inspection, Xi Jinping pointed out the "unique advantages" of Fujian's development of party history learning and education.

Xi Jinping, who has worked in Fujian for many years, cherishes Fujian's red resources and revolutionary history.

Xi Jinping visited the site of the Gutian Conference alone seven times during his work in Fujian.

In October 2014, Xi Jinping once again came to the Gutian Conference site to recall with everyone the scenes of hard work and hard work when the ancestors explored the revolutionary road, and introduced him to Gutian every time he visits the situation and feelings.

After a long time of precipitation, the historical track is clearer.

When inspecting Fujian this year, Xi Jinping requested four "profound insights" in the study and education of party history.

This is interlinked with the requirement that everyone "think deeply about where and why we started" at the Gutian Conference Memorial Hall more than six years ago.

"We must make good use of such red resources, tell red stories well, do a good job in red education, and let the red genes pass on from generation to generation."

This is the "half quilt" sculpture on the square of Shazhou Village, Rucheng County, Hunan Province (photographed on June 14, 2019).

In September 2020, Xi Jinping went to Hunan for investigation and investigation. The first stop was to visit Shazhou Yao Village in Rucheng County, Chenzhou City to learn about the local party’s strengthening of grassroots party building, the development of red tourism and red education.

The "half quilt" story that happened when the Red Army passed by in the Long March, Xi Jinping once told affectionately at the 2016 meeting to commemorate the 80th anniversary of the victory of the Red Army Long March: "In Shazhou Village, Rucheng County, Hunan, 3 female Red Army soldiers stayed in the old man Xu Jiexiu's house. Before leaving, he cut off half of his only quilt and left it for the elderly. The old man said, what is the Communist Party? The Communist Party is the one who has a quilt of its own and will cut half of it for the ordinary people."

One branch and one leaf are always affectionate.

"Today, we relived this story and are still very moved." Xi Jinping sighed.

"We must make good use of such red resources, tell the red story well, do a good job in red education, and let the red gene pass from generation to generation."

"We must keep in mind where the red regime came from and how the new China was established."

"Where is Yu? This is the Central Soviet Area, where the Red Army's Long March assembly started."

In May 2019, Xi Jinping took a flight, took a train, and changed cars to Yudu County in southern Jiangxi for more than 7 hours to pursue the red memory and cherish the memory of the prosperous years.

"We must keep in mind where the red regime came from and how the new China was established, and cherish the socialism with Chinese characteristics created by our party, and strengthen self-confidence in road, theory, system, and culture." Long March in the Central Red Army At the departure memorial, Xi Jinping's words were solemn and firm.

The pictures and objects in the memorial have witnessed that epic history, concretized the great spirit of the Long March, and reminded us that we must never forget the original aspiration and mission of the party, and the revolutionary ideals and purposes of the revolution.

"Lei Feng is a model of the times, and Lei Feng's spirit is eternal"

In Fushun, Liaoning, on the south bank of the Hun River, the tomb of Lei Feng surrounded by cypresses is particularly solemn.

Fushun is the birthplace of Lei Feng's spirit.

In September 2018, during an inspection in the three northeastern provinces, Xi Jinping made a special trip to the Lei Feng Memorial Hall in Fushun City, Liaoning Province to visit the exhibition of Lei Feng's life and deeds.

In front of Lei Feng's handwritings, relics, photographs and other exhibits, Xi Jinping stopped to watch and contemplate from time to time.

In March 2013, when participating in the deliberations of the Liaoning delegation at the First Session of the Twelfth National People’s Congress, Xi Jinping praised Lei Feng, Guo Mingyi, and Luo Yang for their conviction energy, great love, selflessness, and enterprising spirit. It is the best portrayal of our national spirit.

"Lei Feng is a model of the times, and the spirit of Lei Feng is eternal." At the Lei Feng Memorial, Xi Jinping said with emotion that if more than 1.3 billion Chinese, more than 89 million party members, and more than 4 million party organizations can learn from Lei Feng's spirit, they can all be in their own positions. To be a screw that never rusts, our cohesion and combat effectiveness will be extremely strong, and we will be invincible.

Realizing the great rejuvenation of the Chinese nation requires more "Lei Feng" of the new era.

"Every cultural relic of the founding of the party is very precious, and every scene is intriguing."

The Nanhu Red Boat docked on the island in the heart of Nanhu Lake, Jiaxing, Zhejiang (photographed on October 27, 2020).

On October 31, 2017, one week after the victory of the 19th National Congress of the Communist Party of China, Xi Jinping led a member of the Standing Committee of the Political Bureau of the CPC Central Committee to go here to trace the roots of our party and explore the original aspirations of the Communists.

The sun and the moon have changed, but the original aspiration and mission of the Communist Party of China have never changed.

"Every cultural relic when the party was founded is very precious, and every scene is intriguing. We must always recall and think deeply to interpret the original intention of our party." Xi Jinping urged.

"I want to give everyone a good talk and tell everyone how our party got here."

This is the site of the Zunyi Conference taken on January 26, 2021.

During the Long March, the Red Army had the longest activity and the widest range of activities in Guizhou, leaving us with abundant red resources and precious spiritual wealth.

Here, the Zunyi Conference, an important meeting with a great turning point in the history of our party, was held.

In June 2015, Xi Jinping went to Guizhou for investigation and research, and his first stop came to Zunyi.

"Is Wujiang Ferry still its original appearance?" "Is there any revolutionary activities in Zunyi?" ... In the Zunyi Conference Exhibition Hall, Xi Jinping stopped and stopped from time to time in front of pictures and charts, physical models and simulation scenes.

He asked the explainer: "I want to give you a good explanation and tell you how our party got here."

"I've been here many times, every time I go to Yan'an when I jump in the queue, I have to come to see it every time, and I get spiritual baptism every time."

The Yangjialing Central Auditorium in Yan'an (photographed on December 12, 2017).

In February 2015, Xi Jinping, who was investigating in Shaanxi, came to Yangjialing, Yan'an, to pay homage to the site of the Seventh Congress of the Communist Party of China.

"I've been here many times, and every time I go to Yan'an, I have to come and have a look every time I jump in the queue. I am baptized in spirit every time." At the site of the Seventh Congress, Xi Jinping said emotionally.

"We must always learn from him"

In front of exhibits such as the bronze bust of Jiao Yulu, the "Ten Prohibited Cadres" icon, and the desk before Jiao Yulu's death, he took a close look.

When visiting Jiao Yulu's office restored on a one-to-one ratio, the general secretary once again saw the famous wicker chair protected by a glass cover. He looked at it silently... Seeing things and remembering people, Xi Jinping sighed: "Although what you see and hear are more Familiar, but I still want to take a look and listen more, because every object and story here can resonate in my heart."

The Jiao Yulu spirit is the same as the revolutionary traditions and great spirits such as Jinggangshan spirit, Yan'an spirit, and Lei Feng spirit, and is the precious spiritual wealth of our party.

Xi Jinping emphasized: "We must always learn from him."

"For us communists, the history of the Chinese revolution is the best nourishment agent"

The swivel chair used by Mao Zedong, the desk used by Zhou Enlai, the latest detailed map of North China used by Dong Biwu...From the Xibaipo Memorial, Mao Zedong’s old residence to the Central Military Commission’s war room, and the site of the Second Plenary Session of the Seventh Central Committee, Xi Jinping listened carefully to the explanations of the staff. Ask about the situation from time to time.

The pictures and cultural relics outline the prosperous years of the year, and they are vivid teaching materials for the nature and purpose of the party.

"For us, every visit to Jinggangshan, Yan'an, Xibaipo and other revolutionary holy places is a spiritual and ideological baptism." The consciousness of public servants and the feelings for the people are more firm and pure under the washing of the red spirit.

"I've been to Xibaipo many times, and each time I came with a heart of reverence and walked with a lot of thinking." Xi Jinping emphasized, "For us Communists, the history of the Chinese revolution is the best nourishing agent. Multiple warmths. These great histories will add a lot of positive energy in the heart."

The precious value of red resources lies not only in its historical brilliance, but also in that it can still bring us thinking and spiritual nourishment in the present.

Make good use of red resources and inherit the red gene, inject strong impetus to realize the Chinese dream of the great rejuvenation of the Chinese nation.