1177 informed about vaccine - with picture of known meme

During the weekend, the booking of vaccines opened for people over 75 in the Stockholm Region. To illustrate the age group on Vårdguiden's website, a picture of an older man was used - a picture that had previously become known as a meme. - We did not know that it was a meme before we were made aware of this, writes Hanna Fellenius, press officer at Region Stockholm. 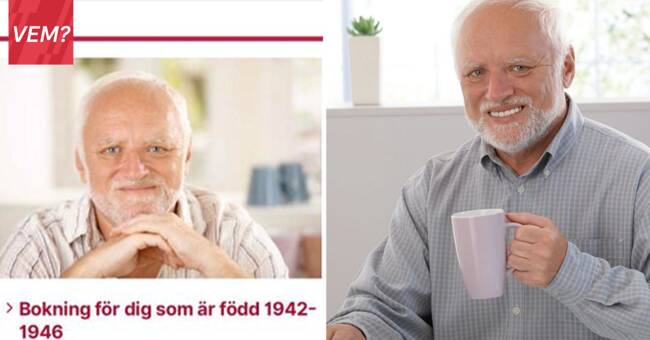 The availability of vaccine from Astra Zeneca was judged to be good in the Stockholm Region over the weekend and therefore the opportunity was opened for people born 1942-1946 to book an appointment for vaccination against covid-19.

When the information was published on 1177.se, an image from Bildbyrån of an elderly man was used.

What they were not aware of is that the image has long been used as a meme, better known as "Hide the pain Harold", something that was noticed by users of the forum Reddit.

- We became aware that it was a meme via an email to the editorial staff, writes Hanna Fellenius, press officer Region Stockholm, in an email to SVT Nyheter.

The picture was published at 2.30 pm on Sunday and was replaced on Monday morning.

- Our assessment is that the publication for a few hours of an image that is not in itself misleading or inappropriate does not damage confidence in the covid-19 vaccinations - which is our most important focus right now, writes Hanna Fellenius.