What impact will the Suez Canal have on China as a result of the "Great Ship Jam of the Century"?

China News Service, Beijing, March 29 (Reporter Li Jinlei) Who would have thought that a boat jam in the Suez Canal might affect your wallet.   On March 23, the Suez Canal occurred in the "Century Great Ship Jam". A 400-meter-long giant ship was blocked in the channel. It has been a week since. The latest news is that the huge ship has resurfaced, but it will take three and a half days for the 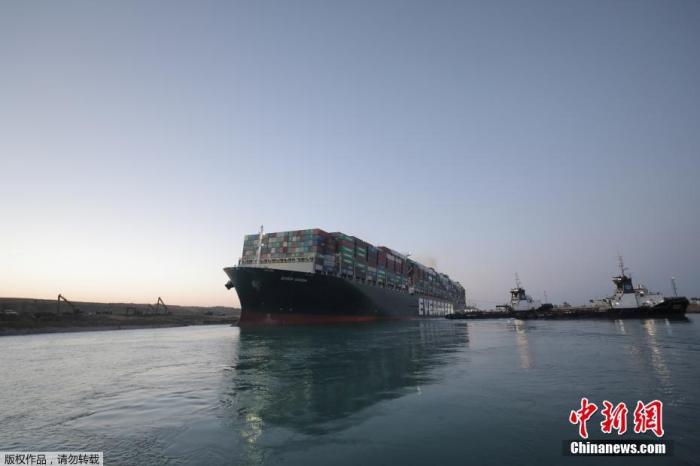 China News Service, Beijing, March 29 (Reporter Li Jinlei) Who would have thought that a boat jam in the Suez Canal might affect your wallet.

On March 23, the Suez Canal occurred in the "Century Great Ship Jam". A 400-meter-long giant ship was blocked in the channel. It has been a week since.

The latest news is that the huge ship has resurfaced, but it will take three and a half days for the canal to return to flow.

My friends are concerned about what impact will it have on China under the butterfly effect?

Is the price of toilet paper really going to increase because of this?

In fact, things are not as simple as imagined.

On March 29, local time, the heavy cargo ship stranded in the Suez Canal had successfully floated, and the hull direction was obviously corrected.

The picture shows that the hull of this 400-meter-long cargo ship has gradually been straightened and is close to being parallel to the bank of the canal.

Are oil prices going up?

NO, or the first drop within the year

As one of the busiest shipping routes in the world, the Suez Canal provides an important channel for ships to and from Asia, the Middle East and Europe.

It is estimated that about 12% of the world's trade volume is passed through, of which energy exports such as liquefied natural gas, crude oil and refined oil passing through this canal account for 5% to 10% of global exports.

The blockage of the canal has already had a certain impact on the oil market. After the news, crude oil prices jumped for a while, so the Chinese people were worried whether domestic oil prices would continue to rise?

In fact, it will not. On the contrary, domestic oil prices may fall for the first time this year.

Domestic oil prices are adjusted every 10 working days, and the price adjustment window for this round is 24:00 on March 31.

According to Jinlianchuang's calculations, as of the 8th working day of March 29, the average price of reference crude oil was $63.62/barrel, with a rate of change of -5.26%, and the corresponding retail price of gasoline and diesel should be reduced by 230 yuan/ton.

Because crude oil is unlikely to have a strong rebound in the short-term trend, the tone for this round of price adjustment has been set, which means that domestic refined oil products have stopped "nine consecutive rises" and will soon usher in the first downward adjustment in 2021.

Jinlianchuang fuel oil analyst Xu Huali analyzed to a reporter from Chinanews.com that from the perspective of fuel oil trade and supply and demand, the Suez Canal is an important channel for fuel oil producing areas such as Russia, the Mediterranean, and Northwest Europe in the western region to the Asia-Pacific consumption areas. , But at present, the overall supply of fuel oil in the Asia-Pacific region is relatively abundant, especially for low-sulfur fuel oil. It is expected that short-term cargo delays will not cause significant market impact.

Overlooking the scene of a giant container ship stranding on the Suez Canal.

To increase the price of toilet paper?

Because pulp transportation may be blocked, the risk of global toilet paper shortages will rise again.

According to reports, Brazil’s Suzano, one of the world’s largest producers of toilet paper pulp, said that the blockage of shipping containers may cause delays in deliveries to toilet paper manufacturers.

If the problem continues to worsen, a global shortage of toilet paper will be inevitable.

Is the price of domestic toilet paper going up due to the blockage of the Suez Canal?

The price of domestic toilet paper is indeed going to increase, but the fundamental reason is the increase in raw material prices, and the price increase has been brewing for some time.

Many domestic paper companies have recently announced that they will increase prices.

The domestic household paper giant Zhongshun Jierou said that due to the continuous increase in raw material prices, it plans to make substantial adjustments to the prices of its household paper products on April 1.

Vinda Paper (Beijing) also said that due to the continuous increase in raw material prices, production costs have increased sharply, and it plans to conduct the first round of price adjustments for some products under the Vinda brand from April 1.

Chang Junting, an analyst at Zhuo Chuang Information, introduced to a reporter from Chinanews.com that China's wood pulp import dependence is above 60%, and China's softwood pulp imports will drop by 1.44% in the first 11 months of 2020.

Therefore, if the blockage of the Suez Canal cannot be resolved in a short time, it will add a “fire” to the already tight supply of pulp, and the toilet paper in your hand will really face greater pressure to increase prices.

Recently, as the rescue work of the giant cargo ship stranded in the Suez Canal continues, excavators that dig the sand for the bow of the giant ship have gradually become popular on the Internet.

Facing a heavy freighter with a length of about 400 meters and a width of about 59 meters, the excavators that are full of muscles on weekdays become "little ants" and become the most "inspiring" excavators.

What is the impact on China's economy?

Bai Ming, deputy director of the International Market Research Institute of the Institute of International Trade and Economic Cooperation of the Ministry of Commerce, told a reporter from Chinanews.com that the long-term blockage of the Suez Canal is not a good thing for the Chinese economy in general. The most important thing is to impact the industrial chain between China and Europe. And supply chain.

Some analysts pointed out that the biggest impact of the Suez Canal incident on China should be the rise in container freight rates.

Zhong Meiyan, director of energy and chemical industry of Everbright Futures, pointed out that with the blockage of the canal, the shortage of containers in Asia has become more serious, which has led to rapid growth in container shipping prices and higher logistics costs.

The Suez Canal is blocked by boats, and it is too far to detour the Cape of Good Hope. Rail transport has become a "sweet pastry".

According to reports, some domestic international logistics service platforms have received a large number of inquiries about China-Europe freight train transportation in recent days.

Although the transportation cost of the China-Europe Express is 50% higher than that of ocean freight, it is still much lower than that of air freight.

According to estimates by the German insurance giant Allianz Group, the blockage of the Suez Canal could cost US$6 billion to US$10 billion in global trade every week.

I hope this "most expensive ship jam in history" will end soon, so that the world trade chief can breathe a sigh of relief, and let the inspiring excavator brother have a good rest.