Second draw for the azzurrini, with Spain suffering 0-0

Another point for Nicolato's Italy, after the one against the Czech Republic. For access to the knockout phase, Tuesday's match against Slovenia, last of the group, was decisive. Again two expulsions 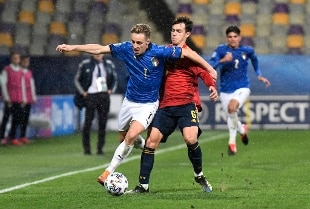 Italy under 21 closes the second match of Group B of the European Championships 0-0, second draw after the 1-1 debut against the Czech Republic. For the qualification to the knockout phase the match on Tuesday 30 becomes decisive against Slovenia, which after losing 3-0 to Spain drew 1-1 with the Czech Republic. The ranking sees the Iberians in the lead with 4 points, us and the Czechs 2 and Slovenia 1.

The first two of each group will be admitted to the final knockout phase, scheduled from 31 May to 6 June.

At the Stadion Ljudski vrt in Maribor, Slovenia, between azzurrini and Spain, reigning champions, a real match, with Nicolato's team ending up in nine as against the Czechs on their debut.

However, the coach's comment to RaiSport's microphones was positive: “I am satisfied with the response of the boys, they played an important match.

They have love for the blue shirt, they want to surpass themselves, I always see great commitment ”.

Disqualified Gabbia, Tonali and Marchizza, the coach Nicolato confirms only the goalkeeper Carnesecchi and the attacking couple Cutrone-Scamacca: in the three-man defense Lovato, Delprato and Ranieri;

in between Frattesi, Rovella and Pobega with Bellanova and Frabotta on the flanks.

At half an hour Frattesi takes advantage of an error by Guillamon and kicks, Fernandez touches and sends on the crossbar.

In the second half, in the rain, Spain tries with shots from outside the box: Garcia at 58 ', blocks Carnesecchi, and Moncayola at 62', out.

Thrill in the 69th minute when Bellanova loses a ball, then Del Prato contains Ruiz's shot.

At 70 'Nicolato inserts Raspadori for Cutrone.

Scamacca remedies two yellow cards in a few minutes for two braces and in the 86th minute he gets sent off for a blow on Mingueza, who argues with Rovella: two more red cards: Italy in nine (Spain in ten) as in the last minutes of the debut .

Carnesecchi protagonist in the recovery: first he rejects a shot from Pipa then flies to put Garcia's jab over the crossbar (92 ').

Frattesi hurt himself and an ankle, even eight in the last seconds blue.

A deflected Garcia shot goes by a whisker in the 95th minute.