More than 8.51 million people in Beijing have been vaccinated against the new crown vaccine, including 520,000 teachers and students from various universities

China News Service, Beijing, March 27th (Xu Jing Du Yan) As of 24:00 on March 26, Beijing had received 13.689,500 new crown vaccines and a total of 8.16 million people were vaccinated, of which 520,000 were vaccinated by teachers and students in universities in the capital. .   In accordance with the principle of "should receive everything, as soon as possible", Beijing is advancing the new cro 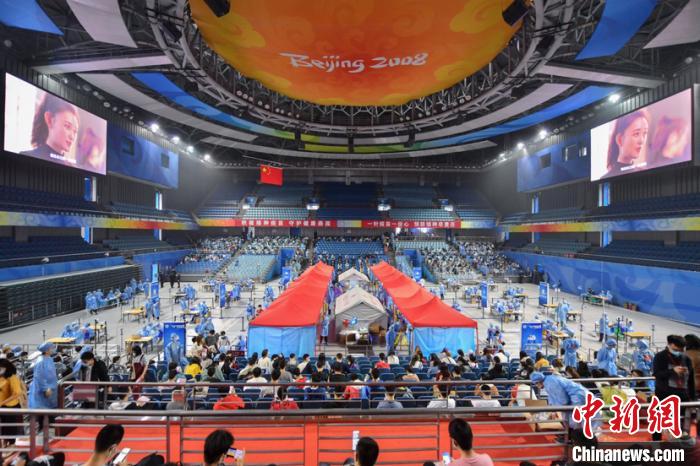 In accordance with the principle of "should receive everything, as soon as possible", Beijing is advancing the new crown vaccination in a safe and orderly manner.

The spring semester begins one after another. As students return to Beijing, universities in the capital have entered the period of full vaccination.

On the afternoon of March 27, Peking University organized students to vaccinate the new crown vaccine at Qiu Deba Gymnasium.

As the most densely populated area of ​​Beijing colleges and universities, Haidian District has recently been fully engaged in the service guarantee work of college vaccination.

In combination with the schedule of students' study and life after the recent intensive start of semesters in colleges and universities, on March 27th and 28th this weekend, Haidian organized inoculation teams through 14 streets to provide door-to-door services in accordance with the principle of "students do not leave school". Nineteen universities, including universities, intensively carried out vaccination.

On March 27, the reporter saw at the vaccination site of Qiu Deba Gymnasium located at the southeast gate of Peking University that students were vaccinated in a safe and orderly manner in time periods and in batches.

On the afternoon of March 27, in the Qiu Deba Gymnasium of Peking University, a student who had just received the new crown vaccine walked to the observation area.

Signs with uniform signs are placed in each area so that students can quickly locate and orderly vaccinate.

Guan Yuting, a 2018 undergraduate student of the National Development Institute of Peking University, was vaccinated against the new crown on the afternoon of the 27th.

She said that the school collected vaccination wishes through WeChat push and internal notifications about 10 days ago, and popularized vaccination-related precautions to teachers and students.

After receiving the notice, the students around me were also very willing to be vaccinated.

"Vaccination is not only responsible to oneself, but also to other students and the school," Guan Yuting said.

On the afternoon of March 27, in the Qiu Deba Gymnasium of Peking University, a doctor vaccinated a student for the new crown.

It is reported that a total of 735 student volunteers from Peking University took the initiative to register and cooperate with the vaccination work throughout the process.

Wang Xinyu, a 2018 undergraduate from Yuanpei College, Peking University, is one of the volunteers involved in the vaccination work.

He introduced to reporters that he is mainly responsible for the recruitment, job placement and training of volunteers.

During the vaccination process, he also patrolled to provide help to students and solve problems.

On the same day, the Municipal Education Working Committee, the Municipal Education Commission and the Beijing Film Academy jointly released the new crown vaccination publicity video for the capital colleges and universities: Li Daokui, Dean of the Chinese Institute of Economic Thought and Practice, Tsinghua University, 2016 students of the Beijing Sport University Graduate Champion Class, Winter Olympics champion Wu Dajing, undergraduate student Jiang Yiyi from the Central Academy of Drama, Zhang Zifeng, undergraduate student from the Beijing Film Academy, and other teachers and students issued "vaccination, everyone's responsibility" to the whole society, "vaccinate against the new crown, build immunity together The call of the Great Wall.

On the afternoon of March 27th, in the Qiu Deba Gymnasium of Peking University, students who received the new crown vaccine waited to observe.

As of March 26, all universities in the capital have vaccinated a total of 520,000 teachers and students.

The reporter learned that the current total number of COVID-19 vaccines in Daxing District exceeds 808,000, and the cumulative number of doses is 1.269 million. The vaccination coverage rate is the first to reach 80% in the city, and the COVID-19 immune barrier in Daxing District has been initially established.