From Zhuxi Garden in Wuyi Mountain to Three Lanes and Seven Alleys in Fuzhou: Eight Min Context, a source of fresh water 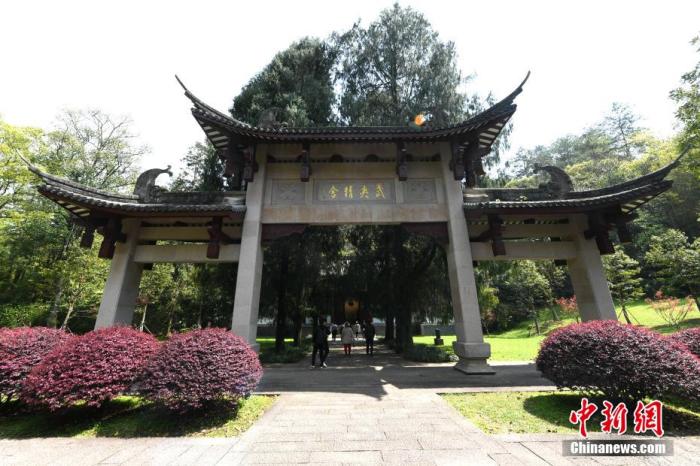 "The general secretary just came, and the number of tourists in Zhu Xi Garden suddenly increased." When a China News Agency reporter walked into Zhu Xi Garden in Wuyi Mountain, Fujian, he was still excited when he saw the staff member Huang Shian.

On the afternoon of March 22, Xi Jinping, General Secretary of the CPC Central Committee, President of the State, and Chairman of the Central Military Commission, who was investigating in Wuyi Mountain, came to Zhuxi Garden to learn about the inheritance of traditional culture.

Data map: "Wuyi Jingshe" is written on the archway of Zhu Xiyuan.

Zhu Xi Garden, also known as Wuyi Jingshe, was founded by Zhu Xi, a famous Confucianist in the Southern Song Dynasty, where he lived, wrote, and lectured for more than forty years.

Today, it is the core part of the Wuyishan World Cultural Heritage, and it is also known as the "cradle" of Zhuzi Neo-Confucianism.

Huang Shian told reporters that Zhu Xi founded Wuyi Jingshe in 1183, and taught there for 8 years, completing "Enlightenment of the Book of Changes", "Primary School", "The Mistakes of Filial Piety" and other works.

Zhu Xi completed the revision and published the "Four Books, Chapters, and Annotations", marking the maturity of the Neo-Confucianism system of Zhu Zi's culture.

Zhu Xi is known as the master of Confucianism since Confucius and Mencius.

He focused his efforts on promoting "study of things, knowledge, sincerity, integrity, self-cultivation, family harmony, governance, and peace in the world", which enabled the spread of Neo-Confucianism to the greatest extent and greatly enriched the connotation of Chinese traditional culture.

Zhu Xiyuan introduced Zhu Xi's life with words, pictures, and objects, and also introduced the grand occasions of his doctrine that penetrates ancient and modern times and spreads far and wide overseas.

Walking all the way in, to the innermost house, there was a sentence on the wall on the back of the turn-"The country is based on the people, and the society is also for the people."

In 2018, Xi Jinping quoted the famous saying of Zhu Xi representing Zhu Xi's "people-oriented thinking" in his speech during the sixth collective study session of the Politburo of the CPC Central Committee.

"The general secretary walks, watches, and talks." Huang Shian said that the general secretary emphasized that special attention should be paid to digging out the essence of the five thousand years of Chinese civilization, promoting excellent traditional culture, and combining the essence with Marxist standpoints and methods. , Unswervingly follow the path of socialism with Chinese characteristics.

Three Lanes and Seven Alleys in Fuzhou: One Street, Half of Modern Chinese History

Located in the center of Fuzhou, Sanfang Qixiang is a large-scale and relatively well-protected historical and cultural district in China. It is known as the "living fossil of the Lifang system in the Chinese city" and the "Ming and Qing Architecture Museum of China".

A large number of people who had an important influence on Chinese modern history came out from here, so there is a saying that "three lanes, seven alleys and one street, half of China's modern history".

On the afternoon of the 24th, Xi Jinping, who was investigating in Fuzhou City, Fujian Province, came to Sanfang Qixiang to learn about the protection of historical and cultural blocks.

"The general secretary is very concerned about the protection of historical and cultural blocks." Yan Tao, chairman of the Fuzhou Ancient House Conservation and Development Group Co., Ltd., who was interviewed by the reporter, said that Sanfang Qixiang actually started the prelude to the protection and restoration in the hands of the general secretary. In this visit to Three Lanes and Seven Alleys, the general secretary emphasized the preservation of traditional neighborhoods, ancient buildings, and cultural relics, which is to preserve the history and context of the city.

At present, the Fuzhou Ancient House Conservation and Development Group plans to proceed with the protection and promotion of the Three Lanes and Seven Alleys from three aspects: one is the preservation and restoration of the historical and cultural heritage itself, planning first, scientific protection, and protecting the traditional texture of the three lanes and seven lanes; Discover the celebrity stories behind the architecture; the third is to revitalize the architecture to let more people understand the ancient architecture and understand the history and context of Fuzhou.

Step into Langguan Lane from Nanhou Street, the "central axis" of Sanfang Qixiang, and follow the Qingshiban Road for more than 100 meters to the east, which is the former residence of Yan Fu.

In 1997, at the academic seminar "Yan Fu and China's Modernization", Xi Jinping, then the deputy secretary of the Fujian Provincial Party Committee, wrote an inscription for Yan Fu, "Strict academic research, pioneering reform, pursuit of truth, patriotism and prosperity".

These 16 characters are now written on the wall of Yan Fu's former residence.

In 2001, Xi Jinping edited the book "Science and Patriotism: A New Probe into Yan Fu's Thought".

"The general secretary has always attached great importance to the protection and inheritance of cultural heritage, and has always been consistent." Chen Liang told reporters, "Three lanes and seven alleys are the city's brand and window for tourists from all over the world. The relationship between users will be passed on forever.” (End)