China News Service, March 23. According to Singapore’s “Lianhe Zaobao” on the 23rd, Europe’s vaccine battle is getting fiercer. The European Union has indicated that it will start a review and may eventually refuse to authorize the export of AstraZeneca’s crown disease vaccine to the UK until AstraZeneca. Silicon fulfills the contract to deliver to the European Union. Data map: A medical worke 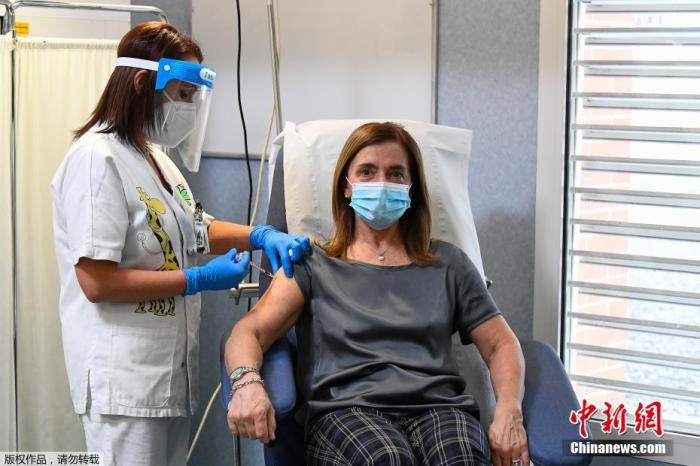 China News Service, March 23. According to Singapore’s “Lianhe Zaobao” on the 23rd, Europe’s vaccine battle is getting fiercer. The European Union has indicated that it will start a review and may eventually refuse to authorize the export of AstraZeneca’s crown disease vaccine to the UK until AstraZeneca. Silicon fulfills the contract to deliver to the European Union.

Data map: A medical worker in Italy is working on new crown vaccination.

An anonymous senior EU official told Bloomberg that AstraZeneca has not fulfilled its contract with the EU, so any vaccines and ingredients produced in European factories will be reserved for local use.

AstraZeneca previously notified Brussels that it would only provide 30 million doses of vaccine to the EU in the first quarter, less than half of the contract promised, which intensified the vaccine dispute between the EU and the UK.

The two sides point to each other's implementation of export restrictions and nationalism, which poses a threat to the fragile post-Brexit trade relationship framework that Britain and Europe just agreed in December 2020.

The European Commission said last week that it would restrict the export of vaccines to countries that "do not respect the spirit of mutual benefit" or have high vaccination rates.

Data map: At the Rocky Health Centre in Dundee, Scotland, a nurse injected an 82-year-old man with the new crown vaccine.

When EU leaders meet this week, they will discuss and decide whether to implement export restrictions.

According to Bloomberg News, Italy and France are open to implementing export bans; others such as Ireland, Belgium and the Netherlands urge caution and warn that this will affect European companies.

In London, the British Defense Minister Wallace warned that if the EU banned AstraZeneca’s exports due to delays in vaccine delivery, the result would only be “reverse”.

He pointed out that the whole world is paying attention to how the EU responds to the shortage of AstraZeneca's vaccine supply, saying that this is related to Brussels' reputation.

The analysis report carried out by the data analysis company Airfinity for the British "Guardian" shows that if the EU imposes an export ban on coronavirus vaccines, this will slow down the UK vaccination plan by two months, while the more populous EU's vaccination plan will only Speed ​​up for more than a week.

Airfinity President Hansen said: "The export ban will cause a double-loss consequence and will affect the expansion of global production. The implementation of the ban means that the EU can slightly increase the dose in the short term, but it will not fundamentally change the supply of vaccines. The EU may be very Soon we still have to rely on vaccine imports."

He pointed out that if the United Kingdom restricts the export of raw materials in order to counterattack, this will not only affect the European Union and the United Kingdom, but will also significantly slow down the overall vaccine production.

On March 10, local time, in London, England, pedestrians walked past the vaccination center of Westminster Abbey.

On the other hand, large-scale clinical trials conducted on more than 30,000 people in Chile, Peru and the United States have shown that the AstraZeneca vaccine is as effective as 79% in preventing coronary disease and does not increase the risk of blood clots.

Analysts said that the latest data should dispel some people's doubts about the effectiveness and possible side effects of the AstraZeneca vaccine.

This vaccine was once suspected of causing blood clotting. At least 17 countries in Europe and many other countries temporarily suspended the use of this vaccine. It was not until last Thursday that the European Medicines Agency announced that it was safe and effective, and the benefits were higher than the potential risks. Germany, France, Italy, etc. use.

AstraZeneca said after the latest clinical trial results that it intends to seek emergency use authorization in the United States within a few weeks.

This vaccine has been approved for conditional sale or emergency use in more than 50 countries and regions.