Al-Sisi raised wages and pensions ... So why were the Egyptians angry?

The joy of Egyptians was not complete with the increase in wages and pensions, and it was mixed with many complaints, complaints and suspicions, especially among pensioners, after they came less than expected and lower than the rates of previous increases. 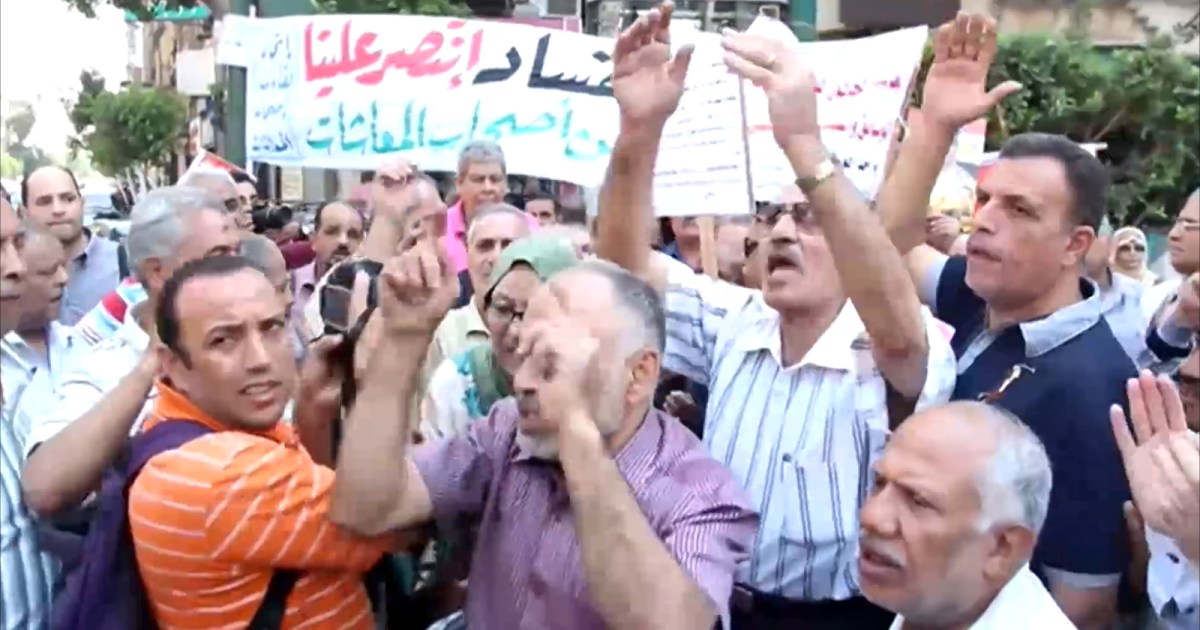 The joy of Egyptians was not complete with the increase in wages and pensions announced by the Authority, and it was mixed with many complaints, complaints and suspicion, especially among pensioners, after they came less than expected and lower than the rates of previous increases.

On Monday, the Presidency of the Republic announced in a statement, President Abdel Fattah Al-Sisi directing to increase the wages of workers in the state’s administrative apparatus, raise the minimum wage and increase pensions, during the review of the budget for the next fiscal year.

The statement spoke of raising the minimum wage to 2,400 pounds (one dollar equals about 15.70 pounds), increasing the value of pensions by about 13%, in addition to approving bonuses and incentives.

By tracking the rate of increases in the minimum wage from 2010 to 2021, it is clear that the new increase did not exceed 20% two years after the previous decision to raise the minimum wage.

🔴 Calculate your salary .. «Finance» reveals details of salary increases starting from the first of July, after mandates by # Sisi.

👈 Raising the minimum wage to 2,400 pounds ... and increasing bonuses and incentives pic.twitter.com/wUkRowNS4F

Instead of increasing pensions by 15% as usual, they increased by only 13%, and the growth in overall wage allocations in the new fiscal year budget of about 11% is less than the previous year by about 2%.

About 5 million employees in the state’s administrative apparatus and about 10 million pensioners benefit from the increase decision, according to Finance Minister Muhammad Maait.

The bad part about these increases is also that they will be financed by "increasing the tax base," according to the minister's statements in a telephone interview on a satellite channel.

please, not an order.

The money of the pensioners is private and you are the first question about it.

The minimum wage was raised to 2,400 pounds.

It costs the state billions of the budget.

Or pensioners have money for a fund.

There are many observations regarding these recent decisions, according to the economist Ahmed Zikrallah, who said that "there is a determination by the state to limit spending on wages, and the argument is that increasing the minimum wage is greater than what is expected will lead to inflation, but in fact the Egyptian market is suffering." From an apparent recession due to the decline in consumption, the state has taken many initiatives and measures to increase spending in order to stimulate markets.

The economic expert confirmed to Al-Jazeera Net that increasing wages and pensions, in line with the increase in prices, will not affect the state's budget, which borrows hundreds of billions annually, but there is a tendency to keep Egyptians at the level of the poverty line for political reasons, adding, "In an attempt to conceal the size of the modest increase, the media outed it. According to his description.

Regarding Egyptians ’fears and anger at these increases, the remembrance of God made clear that they are justified because of the Egyptian people's past experiences with the increases, as it has been established among the Egyptian citizen that governments have a tax authority and not a granting power, and the state does not take into account the pensioners who live on the subsistence level.

The House of Representatives salutes Al-Sisi to raise the minimum wage: He is compassionate to the Egyptians https://t.co/vgLnKBfion

It is worth noting that what the authority announced about raising the minimum wage does not include workers in the private sector, because it is linked to the National Council for Wages, and the average weekly wage in the private sector is less than that in the public business sector and the public sector by more than 45%, according to the data of the Central Agency for Mobilization Public and Statistics.

The authority’s media received the increase decisions, despite similar annoyances to pensioners and the private sector and the decline in wage increases in the new budget, with great hospitality, and some described them as “Sisi's gifts to the Egyptians,” and the deputies sent a message to Sisi that he “has compassion for the Egyptians.”

The economist Ahmed Abu Ali praised the decisions, and considered them evidence "of the interest of the political leadership in Egypt in the file of social justice," as he described, and confirmed in televised statements that "the increase in wages is twice the level of inflation," indicating that the past six years have witnessed a great economic improvement thanks to Economic reform.

On the other hand, and in a strongly worded statement, the General Federation of Unions of Pensioners rejected the percentage of the new increase, describing it as having nothing to do with "the slogans that the Egyptian government shouts about social justice," and demanded an increase to 20% instead of 13%.

The recent increases also raised the concern of some, as they expressed through social media their doubts about the purpose of these recent decisions, and what the government is hiding from the increase in prices, taxes and stamps, which makes it the same and nothing.

You are tired and happy, I will raise wages, set a minimum, and increase pensions to 13%. You

don’t know that pensions were increasing by 15% every year and went down to 13%. Well, I don’t feel an increase in electricity, water and gas bills.

I don’t know that this increase will be matched by price increases. If you are able, you cannot.

Al-Mabtabatati workers on a hero, not a patriot

This comes in light of some fears of an increase in price inflation and a decrease in the price of the currency, especially with what the chief economist of the Institute for International Finance Robin Brooks said a few days ago that Egypt might be forced to devalue the Egyptian pound again, which sparked controversy and concern on social media.

On his Twitter account, Brooks built his theory that the rise in the US interest rate will attract foreign investors' money from emerging markets, including Egypt, and coincides with the continued worsening of the payments deficit.

In addition to the return of the real exchange rate of the Egyptian pound to what it was before the devaluation in 2016, and thus the disappearance of the competitive advantage of buying Egyptian treasury bonds.

, what is the new medicine?

His Excellency reduced the pension bonus from 15% to 13%.

His Excellency raised the minimum wage to 2400

sovereignty is spent on us!

were in the past 15% and became 13% despite the price increases,

they are the most people in need of an increase

in people who take a pension of 1000 pounds.

We know that Mr. President will hear their voice @ AlsisiOfficial pic.twitter.com/RUNoxj3FZO

Good news about raising the minimum wage and increasing the salaries of employees, as it was announced recently, but I hope that this is in parallel with the stability of prices, at least so that people feel some improvement in their financial affairs and that taxes such as income tax or deduction of loans will not be increased to them. We do not need anything.

Al-Sisi raises the minimum wage to 2,400 EGP and grants bonuses at a different rate to workers in the state, especially those transferred to the administrative capital ...

I feel the mouse shining on my chest 🤔