Hallberg: "Risk of us entering a trade war"

Sweden will receive almost 3.3 million fewer vaccine doses of Astra Zeneca during the first half of the year. According to Foreign Trade Minister Anna Hallberg (S), export bans could escalate the conflict further between the countries of the world. - The risk is that we will enter a trade war and we must slow it down, says Hallberg in Aktuellt. 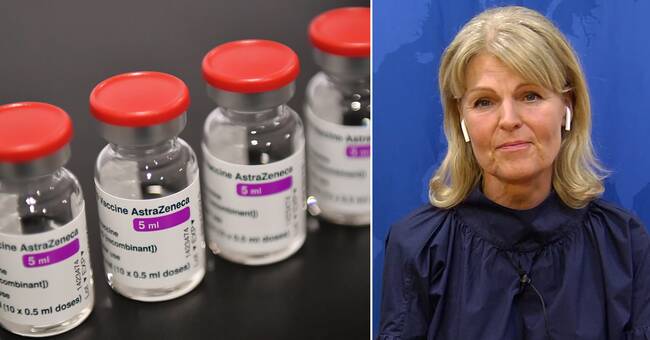 Astra Zeneca has announced that the company will reduce its vaccine deliveries to the EU further during the second quarter compared to previous forecasts.

The planned deliveries of vaccines from the USA, Great Britain and India are stopped by export bans, among other things, and Sweden is now expected to receive 2.3 million doses from Astra Zeneca during the first half of the year - 3.3 million fewer doses than expected.

- We take this very seriously.

It is incredibly unfortunate to impose a ban on the export of vaccines.

There must be free flows of vaccines and inputs to vaccines, says Anna Hallberg.

Many countries may be vaccinated

On March 4, Italy stopped a delivery of 250,000 doses of Astra Zeneca's vaccine that would have been sent to Australia.

It was the first time a country used export controls to secure the supply of vaccines in the EU.

The decision was approved by the European Commission, but according to Anna Hallberg it is not possible to compare the EU decision with an export ban.

But general export bans on vaccines risk knocking out the global supply of vaccines when we have to secure free flows of inputs and vaccines, says Anna Hallberg.

According to Anna Hallberg, today's announcement may mean that many countries may now be completely without vaccines.

- I think we will enter a very vicious spiral if we escalate the conflict.

The risk is that we will enter a trade war and we must slow it down.

We need to increase production and the flow of efforts and go in a completely different direction than what these countries are now doing, says Anna Hallberg.