His Highness Sheikh Mohamed bin Zayed Al Nahyan, Crown Prince of Abu Dhabi and Deputy Supreme Commander of the Armed Forces, and President of the Republic of Serbia, Alexander Vucic, discussed strengthening the level of cooperation between the two countries in the fields of investment, economic and trade, science and technology, food security and agriculture. 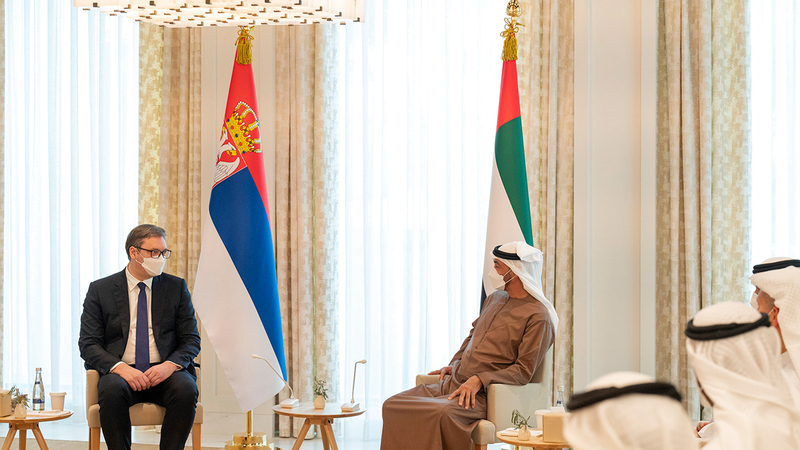 His Highness Sheikh Mohamed bin Zayed Al Nahyan, Crown Prince of Abu Dhabi and Deputy Supreme Commander of the Armed Forces, and President of the Republic of Serbia, Alexander Vucic, discussed strengthening the level of cooperation between the two countries in the fields of investment, economic and trade, science and technology, food security, agriculture and renewable energy.

His Highness Sheikh Mohammed bin Zayed Al Nahyan, yesterday, at the Beach Palace, received the President of Serbia, who is on a working visit to the country.

His Highness welcomed the visit of the Serbian President and the accompanying delegation to the UAE, hoping that the visit would constitute a strong qualitative push in the path of strengthening bilateral relations in various fields, in order to meet the aspirations of the two countries and their peoples for further progress and prosperity.

His Highness conveyed to the Serbian President the greetings of His Highness Sheikh Khalifa bin Zayed Al Nahyan, President of the State, and his wishes for Serbia and its friendly people for continued progress and stability, and for the Emirati-Serbian relations further growth and development.

For his part, the Serbian President, Alexander Vucic, conveyed his greetings to His Highness, President of the State, and his best wishes for continued health, wellness and happiness, and for the UAE and its people further progress and prosperity.

During the meeting, His Highness Sheikh Mohammed bin Zayed Al Nahyan and the President of Serbia discussed friendship and enhancing the level of bilateral cooperation in the investment, economic and trade fields, in addition to science and technology, food security, agriculture, renewable energy, and other promising cooperation opportunities for the two countries.

The meeting also touched on the important and effective cooperation of the two countries to confront the Corona pandemic, and the continuous coordination between them in this regard since the beginning of the pandemic, in addition to the urgent need, during these circumstances, to uphold the values ​​of human solidarity and cooperation to overcome the repercussions of the pandemic at all levels, human, economic and social, especially. What is related to the delivery of vaccines to various parts of the world, right up to the stage of recovery and beyond.

The two sides dealt with a number of regional and international issues of common concern, in addition to developments in the Middle East region, and the challenges facing the region and an obstacle to achieving peace, stability, development and prosperity in it, stressing in this context the need for joint action to support peace initiatives and efforts, stability and development. Regional and global levels.

For his part, Alexander Vucic expressed his happiness in visiting the UAE and meeting with His Highness Sheikh Mohammed bin Zayed Al Nahyan, appreciating the support that the state provides to his country, which had a great impact in supporting the efforts of its institutions in facing the Corona pandemic, and controlling its repercussions.

He affirmed his country's interest in developing its relations with the UAE, and his great confidence in a better and prosperous future for these relations, in light of the many opportunities available to strengthen them and the common political will to continuously push them forward.