"The Masked Singer": presenter Judith Rakers exposed as a chick

Blue plush costume, squeaky voice: the chick on the ProSieben show “The Masked Singer” wasn't a great singer, but she was cute. Now the fluffy animal had to make the flutter. 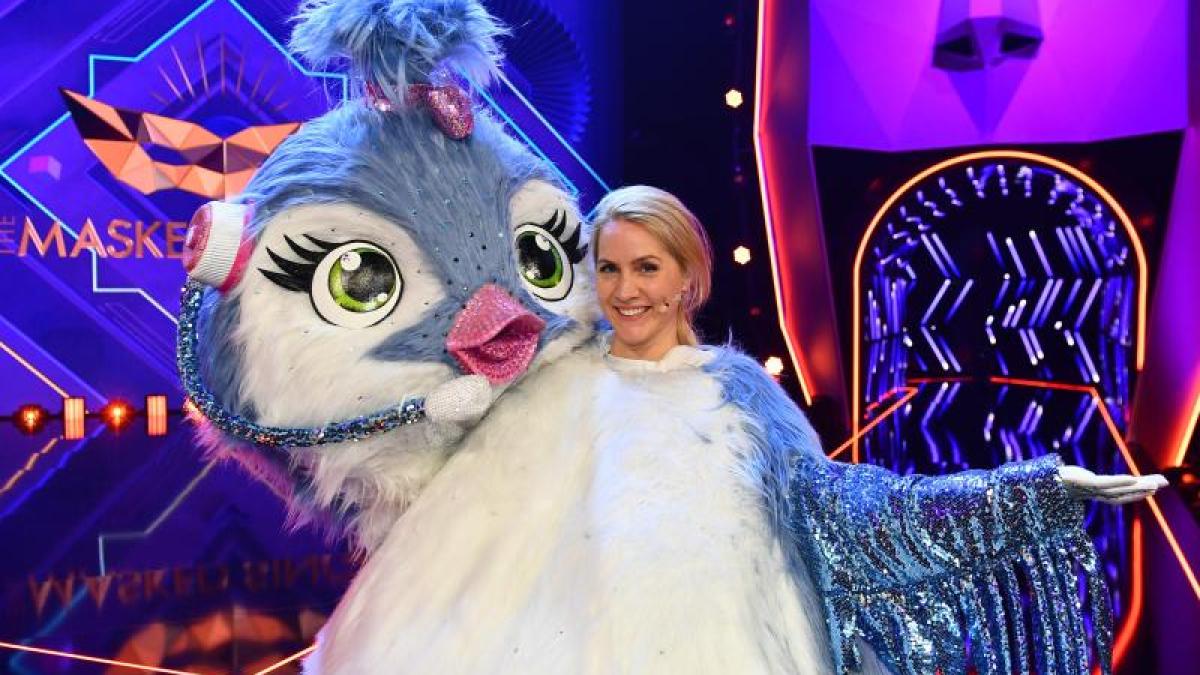 Cologne (dpa) - A “Tagesschau” spokeswoman leaves feathers: presenter Judith Rakers has been exposed as a plush chick on the ProSieben show “The Masked Singer”.

The 45-year-old pulled the mask off her face on Tuesday evening, in which she had taken part in the show undetected.

The revelation was quite a surprise - no one had really expected the “Tagesschau” spokeswoman, whose voice many Germans have in their ears.

It was a trip to another world, ”said Rakers.

Their detour was ended by the "The Masked Singer" viewers: They gave the chick too few votes in the end.

The fact that Rakers, who was born in Paderborn, was able to keep her true identity a secret for so long was due, on the one hand, to the plump costume in which ten meters of fur were woven and under which anyone could have been hidden.

On the other hand, she ironically disguised her voice at every appearance - away from the familiar "Tagesschau" tone.

The result was a kind of squeaky to cute singing that one could have imagined in Duckburg.

“That's about the same voice I use to talk to my animals,” said Rakers.

"I always felt a bit sorry for the audience who had to listen to it," she admitted.

“But: I was told this is a guessing show, you don't have to be a perfect singer now.

I hope that everyone I have given an ear insult will forgive me. "

Although the chick fur shimmered in the characteristic “Tagesschau” blue, no member of the advice team had given Rakers a thought.

The reason: Haase is "also cute" and also has "such big googly eyes".

Presenter Ruth Moschner (44) threw the names of comedian Annette Frier (47) and - thought quite spectacularly - of actress Iris Berben (70) in the ring.

Nobody was really sure.

Garvey decided that was not Berben's style.

The musician himself then guessed singer Anna Loos (50).

His argument: he saw a tree house in a film about the chick.

"In Anna Loos' garden there is exactly this tree house!" Later he paid Rakers respect: "I really wouldn't have thought you could do that."

The chick: "I am not a roast chicken!"

Garvey - who is a little strange with overly fluffy costumes - and the chick had gotten caught up in a little squabble over the past few weeks.

The highlight was a motto shirt by the musician, on which he announced that he liked fried chicken.

The chick countered at one of his performances with the sovereign song line: "I am not a roast chicken!"

On Tuesday there was just a kind of reconciliation.

The chick sang the song "Supergirl", with which Garvey's band Reamonn once had great success.

It also wore a bib with a heart dedicated to the Irish singer.

"That got me already, little chick," Garvey judged.

"That has totally changed."

From "Masked Singer" straight back to the "Tagesschau"

Usually she doesn't sing at all.

“I was rehearsing here on this stage and for the first time had to dare to sing into a microphone,” she reported.

In addition, the costume is heavy and she always had fluff on her face.

In addition, her normal job continued: Sometimes she spoke the news of the “Tagesschau” again the next day immediately after the shows.

In “The Masked Singer”, well-known people sing under elaborate costumes and try to disguise their true identity.

Rakers now failed just before the semi-finals, with which the current season enters the decisive phase.