Here, Scania forged its trucks - signs were changed on a chicken farm

Assignment review may reveal how Scania has falsified truck models on an Indian chicken farm. The trucks were sold to an Indian mining company in a deal worth almost SEK 100 million - and the responsible manager was promoted. 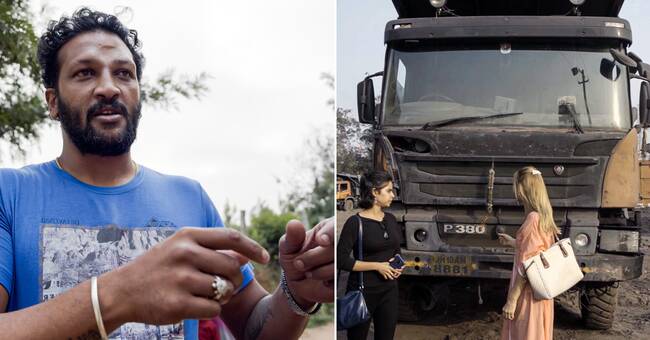 Assignment review, together with German ZDF and Indian Confluence media, has revealed how Scania bribed bus contracts in India.

But the company's irregularities in India are not just about bribes.

For four months, work was underway on an Indian chicken farm to replace signs and chassis numbers on Scania's trucks.

Chicken breeder Shyam Kumar tells Assignment Review that 100 trucks passed his farm - and that the old signs were burned.

- They removed the number and put a new one there, and then the vehicle drove away, he says.

That his particular farm was used was because Shyam Kumar's father was friends with a manager at Scania.

- I told my father that he should not allow it.

If the company gets into trouble, we will suffer.

When Shyam Kumar in connection with the interview calls the Scania manager who ordered and delivered the signs, the manager refuses to comment and refers to the fact that he has been told not to talk about the sign change.

Later that day, Shyam Kumar says that the Scania boss also tried to get him to take back his testimony.

The forgery of the signs was due to the fact that the Indian mining company that ordered the trucks from Scania demanded trucks that were well-proven - and to some extent manufactured in India.

But the older proven model P380 was no longer manufactured.

However, there was a new similar model, P410.

By replacing the plates on the trucks, Scania was able to pretend that it was another model that was delivered and thus win the procurement in competition with two other companies, including Volvo.

- We know that the local management was aware of this.

Our assessment in the internal investigations we have made is that they did it because they wanted to win the deal.

But what they did was totally wrong and it is a behavior that we do not accept, says Scania's CEO Henrik Henriksson.

Suspicions of a settled deal

The deal between Scania and the state-owned Indian mining company BCCL is being investigated by the Indian corruption unit CBI.

According to Indian media, there are suspicions that the deal has been settled - that the mining company would not even have needed this type of truck and that they are barely used.

When Assignment Review manages to find a number of counterfeit trucks at a coal mine in the state of Jharkhand, the atmosphere becomes threatening.

Neither the mining company BCCL nor the corruption unit CBI wants to answer Assignment review questions.

According to Scania, they themselves are not suspected of crimes.

Henrik Henriksson says that Scania has acted forcefully and that the people who were involved no longer work.

But that's not true - the manager who organized the forgery not only continues to work at Scania, but has also been promoted.

- Yes, it is new information that you bring to me, I have to look at it, and take part of it before I can comment on it, says Henrik Henriksson.

After the interview, Scania confirms that the manager continues to work within Scania.

They say that he participated in the investigation and that he acted on the orders of superiors.

This mining company that got the counterfeit trucks, do they know that it was the wrong trucks they got?

- They have found out the information, I judge.

Scania has not reported the suspected fraud to the police.