Seventh win in a row for Inter, Atalanta beaten 1-0

Conte's team only needs a goal from Škriniar in the second half to overcome the orobics and return to +6 over Milan. Setback in the Champions League for Gasperini's Nerazzurri 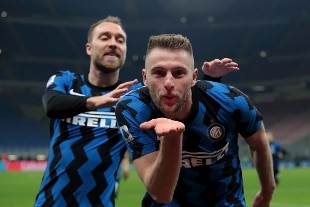 Conte's team beats Atalanta with a minimum gap and returns to +6 over Milan, which he had shortened to win and Verona.

At the 'Meazza' the big match ends 1-0 that closes the 26th day of the championship, seventh return.

And seventh is also the consecutive victory of Inter, which passes an authentic test on the way to the Scudetto.

The Milanese Nerazzurri at the top with 62 points against Milan's 56.

Juventus third at 52, Rome at 50 and the Nerazzurri from Bergamo still at 49. Gasperini's men setback in their run-up to a place in the Champions League.

The challenge between the two best attacks in the league (now 63 goals scored by Inter against 60 by Atalanta) reserves less spectacle than expected, but offers an intense and vibrant match.

Scoring opportunities are lagging behind.

Atalanta goes closer to the goal, first with Zapata with the head, Handanovič makes a corner (39 ');

then always heads with Djimsiti on the corner, this time it's Brozović who saves his goal.

Little else in the first fraction.

Gasperini returns from the locker room with Iličič for Malinovskyi.

At 53 'first change also for Conte who calls Vidal to insert Eriksen.

At 53 'Toloi opposes Perišić granting the corner: from the flag Eriksen, scrum in the area resolved by Škriniar with a shot on the far post (54').

At 68 'Zapata sends just wide from a good position.

Gasperini inserts Muriel in place of the Colombian (70 ').

At 73 'it is the turn of Miranchuk for Pessina among the orobics.

At 76 'Handanovič protects the first post after Muriel's insidious shot.

At 77 'Lautaro and Brozovic leave Inter, Sanchez and Gagliardini enter.

Atalanta forces the hosts into their own half.

At 81 'Gasperini removes Freuler and Djimsiti to insert Pašalić and Palomino.

At 84 'Pašalić immediately dangerous but the conclusion does not hit the target.

At 85 'Conte runs out of exchanges with D'Ambrosio and Darmina for Hakimi and Perišić.

Inter are suffering but not even the 4 minutes of recovery are needed for Gasperini's team to recover the result.

Inter are on the run for real.