A large area has been cordoned off after a gas bus collided with a train at a railway crossing at Hisingen in Gothenburg. The bus was empty of passengers and the driver took himself out of the bus. 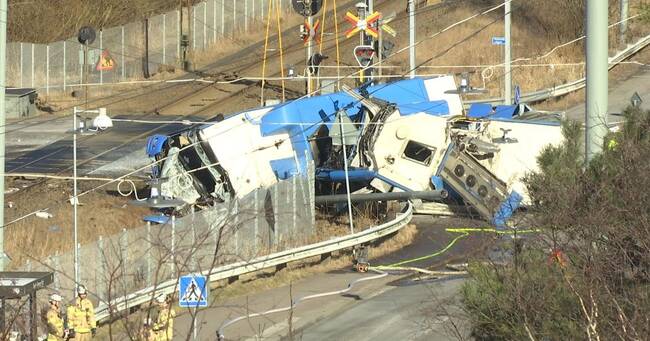 The alarm about the accident at Lillhagsvägen in Gothenburg came in at 07.38 on Monday morning.

The rescue service is on site with several units, and a large area has been cordoned off because it is a gas bus.

However, there is no indication of any leakage right now.

- We have blocked off a large area, 300 meters in each direction.

It will be a long effort due to the risk of leakage, says the rescue service's alarm and control operator Joakim Hallin.

The bus driver was able to get out on his own and there is no information that any person was seriously injured in connection with the accident.

According to information from the police, three people themselves have visited the health center with minor injuries.

The road is currently completely closed and according to the Rescue Service, the operation will continue during the morning.

- We are preparing for salvage, says Joakim Hallin at nine o'clock on Monday morning.

In connection with the accident, the train derailed.

The road is blocked and train traffic on the route will not be able to start until Tuesday morning at the earliest.

The accident is currently being investigated as negligence in traffic and the bus is seized by the police for further technical investigation.

No one has been notified of a suspicion of crime.