Protesters blocked main roads in various parts of Lebanon yesterday, including most of the entrances to the capital, in protest against the continuous deterioration of the pound against the dollar and the country sank into political stalemate without a horizon, in a move described by Lebanese President Michel Aoun as “an act of sabotage aimed at striking 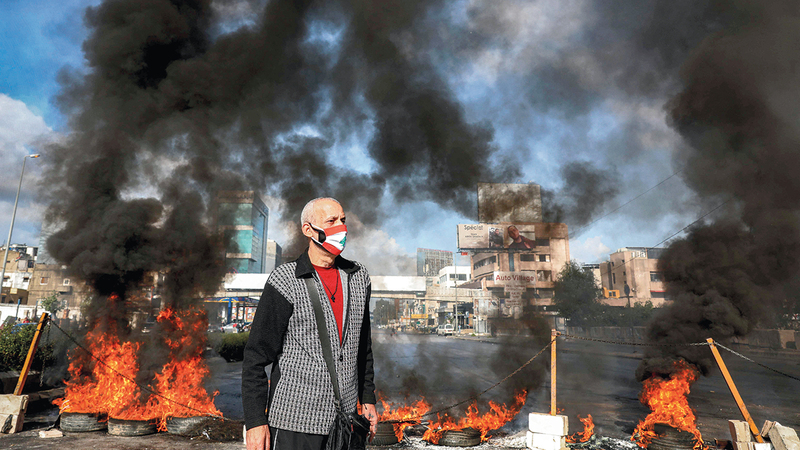 Aoun: Blocking the roads is an act of sabotage that strikes stability

A man passes by a blocked road in the suburbs of Beirut yesterday.

Protesters blocked major roads in various parts of Lebanon yesterday, including most of the entrances to the capital, in protest against the continuous deterioration of the pound against the dollar and the country sank into political stalemate without a horizon, in a move described by Lebanese President Michel Aoun as "an act of sabotage aimed at striking stability." .

AFP correspondents and photographers reported that most of the entrances to Beirut were closed under several slogans, including "the day of rage."

A number of them also set up tents at several points at the northern entrance to Beirut.

According to the National Information Agency, protesters closed the international airport road south of Beirut and roads in several areas in the north, especially Tripoli, and in the Bekaa in the east and in the south of the country, and the army gradually worked to open a number of them.

In recent days, the lira recorded an unprecedented record low since Lebanon entered the cycle of economic collapse a year and a half ago, as the exchange rate against the dollar approached the threshold of 11 thousand on the black market.

Since the summer of 2019, Lebanon is experiencing its worst economic crisis, which has led to the currency losing more than 80% of its value.

Tens of thousands of Lebanese demonstrated, starting from October 17, 2019, against the deteriorating economy and tight banking restrictions.

However, their movements gradually retreated due to the outbreak of the Coronavirus, and then the formation of Hassan Diab's government, which resigned following the terrible port explosion on August 4.

The President of the Republic, Michel Aoun, after chairing an economic security meeting to discuss developments, said that “blocking roads is unacceptable and goes beyond mere expression of opinion to an organized act of sabotage aimed at striking stability,” according to the meeting’s decisions.

The meeting agreed to demand that the security and military agencies "not allow the roads to be closed."

While Aoun considered that the high exchange rate of the dollar was "unjustified", the meeting decided to work on closing "the local illegal electronic platforms and groups that determine the exchange rates". The Lebanese presidency also decided to assign the security services to arrest all persons who violate the provisions of the Currency and Credit Law and the Law Regulating The profession of money changer, including foreign exchange offices.

Since the port explosion, which killed more than 200 people and caused thousands of injuries and destruction to a number of the capital's neighborhoods, the international community, especially France, whose President Emmanuel Macron visited Beirut twice, has repeatedly called on political forces to form a government and implement urgent reforms to put an end to the deterioration and contribute to the exit The country is out of its predicament, in exchange for financial support.

However, the political forces have not yet acted, which exacerbates the anger of the Lebanese.

Media reports linked the exchange rate hike to the end of last month’s deadline set by the Banque du Liban for banks in order to fulfill several conditions, foremost of which is the 20% increase in their capital.