UK. On Sussex Day, the Queen extols duty and unity

Sovereign does not mention Harry and Meghan on Commonwealth Day, it evokes Covid&nbsp; &nbsp; Oprah's interview with Meghan and Harry. The Queen will ignore her Share 07 March 2021No direct mention of the tensions in the Windsor house with the Dukes of Sussex, but an appeal to all the countries of the former British Empire to celebrate "the spirit of unity" and "dedication to duty" in times of Covid. This is Elizabeth II's message for Commonwealth Day , as part of a BBC program in which 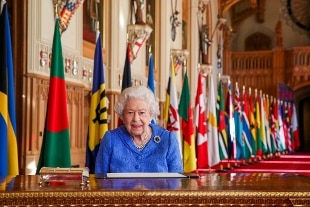 07 March 2021No direct mention of the tensions in the Windsor house with the Dukes of Sussex, but an appeal to all the countries of the former British Empire to celebrate "the spirit of unity" and "dedication to duty" in times of Covid.

This is Elizabeth II's message for

, as part of a BBC program in which the heir to the throne Charles and other royals also participate, as if to want to make a common front on the day of the 'rebels' interview Harry and Meghan at CBS from the USA (expected with embarrassment at court).

In her short speech, the 94-year-old sovereign praises among other things the response to the pandemic, especially in the "front row" of hospitals.

The television event for the Commonwealth Day, set by the court just a few hours after the airing of the American interview of Meghan and Harry, is officially an event organized to start the week of annual celebrations of the community that gathers what remains of the defunct British Empire.

But the parterre is significant: with the intervention in connection, in addition to Elizabeth, of the leaders of the monarchy in full force: from the heir to the throne Charles and his wife Camilla, to Prince William (Harry's elder brother, second in line succession to the crown and eldest son of Charles and Diana) with his wife Kate, up to the Countess of Wessex, Sofia, wife of Prince Edward, the youngest of the Queen's children and 99-year-old Philip of Edinburgh (hospitalized for almost three weeks in hospital, first for an unspecified infection not linked to Covid, then for the after-effects of a "heart procedure" performed "successfully" according to the palace bulletins).

The occasion, explained the queen, is to "celebrate friendship, the spirit of unity and the results achieved by the Commonwealth" in a time that lends itself "to reflection like no other": the time of the pandemic in which "we saw moving examples of courage and selfless dedication to duty witnessed in all the nations and territories "of the former empire, beyond the" different "scenarios, she remarked, also saying she was" encouraged by the progress of therapies and vaccines ".

These are "times that test us, but have pushed us to a deeper appreciation of the mutual support and spiritual assistance we have been able to enjoy by connecting to each other", Elizabeth II insisted, with a reference to what made possible by video technologies, "new to some of us", in spite of the "need to keep a greater physical distance" from loved ones or having to "live and work largely in isolation." The hope - he concluded - is that to now preserve "this renewed spirit of closeness and community" between individuals and between States.

In particular within the Commonwealth, to guarantee "a sustainable and safer future", but also "healthier and happier", for the peoples of the member countries and their neighbors.