How does the wisdom of poverty alleviation "arm" the revitalization of the countryside?

(Observation of the NPC and CPPCC) How does the wisdom of poverty alleviation "arm" the revitalization of the countryside?   China News Service, Beijing, March 7th, title: How to "arm" rural revitalization with the wisdom of poverty alleviation?   Author Zhao Yejiao Li Peishan Chen Xiangyu Wang Enbo   With China's overall victory in the fight against poverty, how can the viable mechanisms that 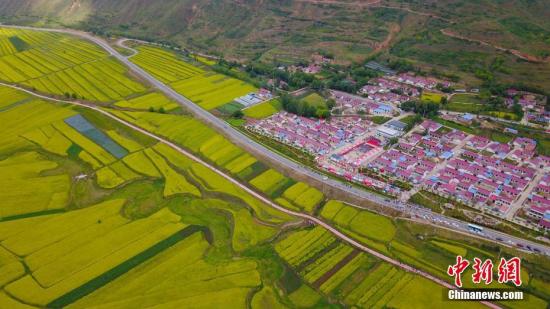 (Observation of the NPC and CPPCC) How does the wisdom of poverty alleviation "arm" the revitalization of the countryside?

With China's overall victory in the fight against poverty, how can the viable mechanisms that have been formed and the wisdom of poverty alleviation be better used for rural revitalization?

At the National Two Sessions held here, many representatives and committee members talked about the way of "convergence" in terms of industrial development, talent training, and rural governance.

At the beginning of this year, a popular film and television drama "Mountain and Sea Love" showed China's magnificent history of poverty alleviation.

As part of the West Haigu region in the film and television drama, Guyuan City is one of the “main battlefields” of Ningxia’s poverty alleviation.

Ma Hancheng, deputy chairman of the People’s Government of Ningxia Hui Autonomous Region, deputy secretary of the Guyuan Municipal Party Committee, and Mayor Ma Hancheng, introduced that Guyuan City is focusing on improving the quality of characteristic industries, such as building a beef cattle breeding base, "let the farmer brothers "make a fortune" ."

From "passive support" to "active prosperity", Li Yuhua, deputy to the National People's Congress and Party Secretary of the Development and Reform Commission of Ningxia Hui Autonomous Region, believes that to smoothly realize the transition from poverty alleviation to rural revitalization, it is necessary to fundamentally curb the short-term bias of industrial poverty alleviation , To build a long-term mechanism for sustainable industrial development.

Yang Weigang, member of the Standing Committee of the National Committee of the Chinese People’s Political Consultative Conference, deputy director of the Standing Committee of the Hunan Provincial People’s Congress, and chairman of the Hunan Provincial Committee of the Democratic League, suggested that supporting policies such as land for the development of poverty alleviation industries, environmental protection, and credit should be improved, and the benefit linkage mechanism of "leading enterprises + industrial bases + poor households" should be deepened , To achieve a win-win situation for small farmers, business entities, and collective economic organizations.

Attracting high-quality talents: from "not attracting" to "retaining"

Many people have emerged in the process of poverty alleviation in China, and the key to rural revitalization is also "people."

Zhu Yilong, member of the National Committee of the Chinese People’s Political Consultative Conference, vice chairman of the Chinese Federation of Returned Overseas Chinese, and chairman of the Ningxia Federation of Returned Overseas Chinese, believes that in order to encourage aspiring young people to take root at the grassroots level, it is necessary to improve the income-generating and entrepreneurial double harvest mechanism for agricultural scientific and technical personnel, so that agricultural scientific and technical personnel and farmers form a community of interests, while establishing guidance and encouraging college graduation A long-term mechanism for working at the grassroots level.

From "not attracting" to "retaining", Yang Weigang said that we must adhere to the combination of "internal education" and "external introduction", increase support for the cultivation of new-type professional farmers and local skilled craftsmen, and build villages for returning talents and college students. The official entrepreneurial service platform supports the flexible introduction of talents in the form of two-way part-time employment and technology shareholding at the grassroots level.

“What the village lacks now is agricultural technology and management talents. We welcome such young people to come to the village, and we suggest that they can be given the right to operate shares in rural cooperatives to attract them to stay and better participate in management.” The whole country Said Yu Xuewen, deputy to the National People's Congress and director of the village committee of Qingkeng Village, Shezu Township, Liucheng, Wuyi County, Zhejiang Province.

On the basis of this poverty reduction path with Chinese characteristics, how to build an effective rural revitalization governance system?

Wei Zhenling, member of the National Committee of the Chinese People’s Political Consultative Conference and deputy procurator of the People’s Procuratorate of Liuzhou City, Guangxi, believes that during the poverty alleviation period, the state has established a basic medical security system and an education security system for the poor. Sustainability, on the other hand, also needs to pay close attention to service quality and promote the equalization of urban and rural public services.

In addition, the diversified needs of rural residents should be taken into consideration, in compliance with the development trend of informatization and intelligentization, and the use of new generation information technology to promote the construction of "smart villages" and open up the "last mile" to serve the people.

He also proposed that the modernization of rural governance should be placed in the "chamber", allowing villagers to act in accordance with the statutes, and village cadres to perform their duties in accordance with the statutes, so as to achieve a "personal management system and system management of people" and create a pattern of good rural governance.