Henry's joy after the conversation with his son: "Lightens a father's heart"

Henry Söderlund's son was seriously injured during the attacks in Vetlanda. On Friday morning, they were heard for the first time, two days after the terrible thing happened. - It felt very, very good, says Henry Söderlund to SVT News. 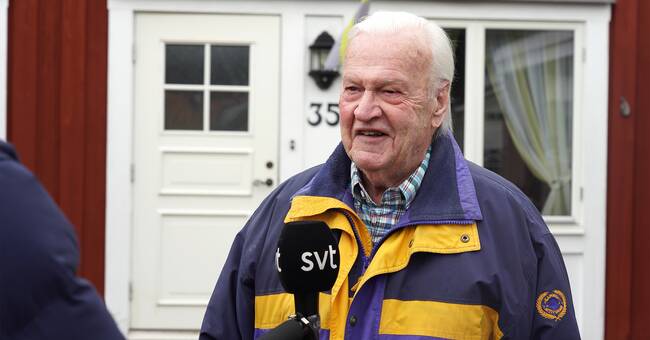 It was late on Wednesday that Henry Söderlund, 89, found out that one of his two sons was being cared for in hospital after he was attacked by an armed man in central Vetlanda.

Henry had sensed trouble when he did not get hold of him in the evening as usual.

They are usually heard every day.

- He was stabbed in the trachea, the carotid artery was damaged.

It was urgent, he says.

The son had lost a lot of blood when he arrived at the hospital, but might have been worse off without his dentist's intervention, which gave him first aid immediately after the act.

Due to the injury, Henry and his son could not be heard until Friday.

- At eight in the morning he called me, I could hardly believe it was true, says Henry Söderlund.

- It has been terrible hours, but now I have at least been told that it is on the rise, it is a brightening.

It lightens a father's heart.

It is still not decided when the son can come home, and so far there is a restraining order.

Maybe they can make an exception, says Henry, who hopes to meet his son as soon as possible.

See the interview with Henry Söderlund in the clip above.