The Pope makes a stark call from Iraq: "Let the weapons shut up"

Pope Francis issued a blatant call shortly after his arrival in Iraq on an unprecedented historic visit to a country devastated by wars and conflicts, saying, "Weapons remain silent!", While Iraqi President Barham Salih said during his meeting with the Pope in the presidential palace, that there is a "historic opportunity to make a visit." 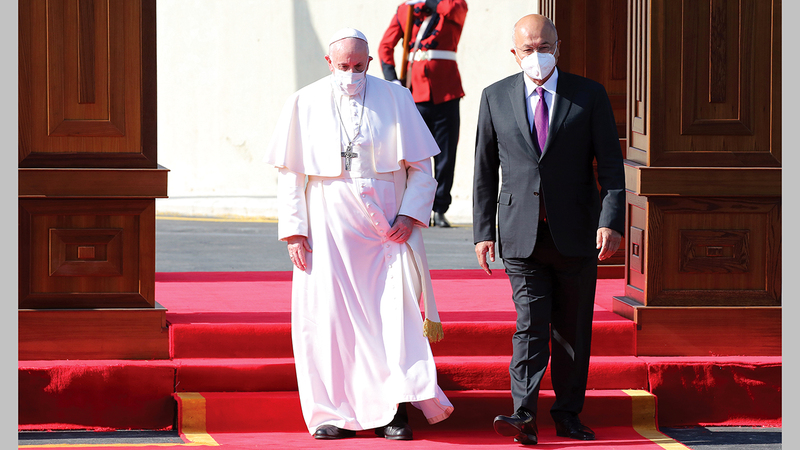 Barham Salih: The visit is an occasion to reaffirm the values ​​of love, peace and coexistence

The Pope makes a stark call from Iraq: "Let the weapons shut up"

Iraqi President Barham Salih receives the Pope at the presidential palace in Baghdad.

Pope Francis issued a blatant call shortly after his arrival in Iraq on an unprecedented historic visit to a country devastated by wars and conflicts, saying, "Weapons remain silent!", While Iraqi President Barham Salih said during his meeting with the Pope in the presidential palace, that there is a "historic opportunity to make a visit." The Pope is an occasion to reaffirm the values ​​of love, peace, coexistence and support for religious diversity.

Under strict security measures, the Pope's motorcade was transported alone in empty roads due to the mandatory quarantine imposed by the authorities during the three days that it would take for his visit to prevent "Covid-19", and the 84-year-old Pope put a muzzle, stressing the importance of "getting out of time." This ordeal, ”the time of the pandemic,“ is better than what we were before, to build the future on what unites us and not on what divides us. ”

Upon his arrival, he touched upon all the sensitive issues and issues that Iraq suffers, during his meeting with the Iraqi President Barham Salih, and said: “Let the weapons be silent, and let us put an end to their spread here and everywhere, and for private interests, foreign interests that do not care about the local population, stop, and let us listen to those who build and make Peace".

He added, "Stop violence, extremism, partisanship and intolerance, to give way to all citizens who want to build this country together in the neighborhood and in a frank, honest and constructive confrontation."

He called for "addressing the scourge of corruption and abuse of power."

He said, "At the same time, justice should be achieved, integrity and transparency developed, and the institutions responsible for this should be strengthened" in order to achieve security and stability.

Referring to Christians who make up 1% of the population, he stressed the need to "ensure the participation of all political, social and religious groups, and to secure basic rights for all citizens," saying, "No one should be considered a second-class citizen."

The Iraqi President welcomed the Pope to Iraq.

"While His Holiness the Pope is a dear and gracious guest among us," he said during his reception at the presidential palace, "there is a historic opportunity to make it an occasion to reaffirm the values ​​of love, peace, coexistence and support for religious and social diversity, describing this as" human values ​​that resonate with the whole world. "

The Pope will head to the Catholic Cathedral of Our Lady of Deliverance, and he will visit Saturday and Sunday Najaf, Ur, Erbil, Mosul and Qaraqosh.

A large part of the Iraqis will be satisfied with watching the Pope on television, and the Pope will most likely use an armored car to travel on specially rehabilitated roads in preparation for the visit, in addition to a helicopter and a private plane for remote transfers.

The Pope's visit to Iraq is the first of its kind in the country's history, and it will include five Iraqi provinces and will continue until the eighth of this month.

An official reception ceremony was held for the Pope, as his motorcade, a military cavalry band, presented the republic's ceremonies, carrying the flags of Iraq and the Vatican State with the tunes of military music.

The Iraqi President and the Pope of the Vatican ascended the platform of salutations, and the Iraqi and Vatican national anthems were played, and the peace baths in the airspace of Baghdad Palace inside the Green Zone celebrated the Pope's presenter.

The Sheikh of Al-Azhar: The Pope's visit is a message of peace and solidarity for all the Iraqi people

The Grand Sheikh of Al-Azhar, Chairman of the Council of Muslim Elders, His Eminence the Grand Imam, Ahmed Al-Tayeb, praised Pope Francis' visit to Iraq, describing it as historic and courageous.

Al-Tayyib said in his tweet on the social networking site “Twitter”: “My brother Pope Francis’s historic and courageous visit to dear Iraq carries a message of peace, solidarity and support for all the Iraqi people.

This trip comes two years after the joint visit of the Sheikh of Al-Azhar and His Holiness Pope Francis, Pope of the Catholic Church, to the UAE, during which they signed the Human Fraternity Document on February 4, 2019;

This was followed by a joint cooperation between the two religious institutions on many humanitarian issues, and the establishment of the Supreme Committee for Human Fraternity.

"Muslim Elders": The Pope's visit to Iraq is a message of solidarity with the victims of violence in the region and the world

The Council of Muslim Elders affirmed that it is following with interest the visit of His Holiness Pope Francis, Pope of the Catholic Church to Iraq, as it represents a great opportunity to promote peace, and sends a message of solidarity with all victims of violence in the region and the world.

The Council affirmed in a statement that the historic visit of His Holiness the Pope comes to heal the wounds of the Iraqi people after many years of wars and destruction, and gives Iraq and the region hope for a better tomorrow based on tolerance and acceptance of others, and that His Holiness’s keenness to complete the visit despite the challenges reflects his belief in the spirit of human brotherhood. And it is considered a call for convergence on the participants and upholding the principle of equal citizenship for all, away from calls for hatred, sectarianism and strife.

The Muslim Council of Elders noted that the papal visit to Iraq and the efforts made by His Holiness Pope Francis to promote peace are consistent with the vision and objectives of the Council in promoting peace and coexistence, confronting hatred and extremism, and building a human relationship based on love and mutual respect.

The Secretary-General of the Muslim Council of Elders, Sultan Al-Rumaithi, said that the numerous visits of His Holiness Pope Francis to the Islamic world have strengthened bridges of dialogue and convergence between East and West, especially as they complement the efforts of his brother, Sheikh Al-Azhar, Chairman of the Council of Muslim Elders, Ahmed Al-Tayyeb, and his tours and movements in the West. What culminated in a joint visit between the two religious figures to the UAE and the signing of the Human Fraternity Document in Abu Dhabi in February 2019.

For his part, the President of the International Council for Tolerance and Peace, Ahmed bin Muhammad Al-Jarwan, praised the Pope’s visit to Iraq, which he considered a message of love, peace, tolerance and support for the Iraqi people.

Al-Jarwan said on this occasion: “We appreciate Pope Francis’s visit to Iraq, which carries with it a message of love, peace, tolerance and support for the people of Iraq who have suffered from the scourge of wars and terrorism for many years, and we hope that it will be the beginning of hope for the reconstruction of Iraq.

- The Pope visits Saturday and Sunday Najaf, Ur, Erbil, Mosul and Qaraqosh.