Parma stretched 2-1 with a brace from Sanchez, Inter flies to +6

Two goals from the Chilean launched the Nerazzurri's escape, who detach Milan and leave Juventus and Atalanta at -10. Too late the goal of the ducals with Hernani: D'Aversa's team penultimate to -6 from safety 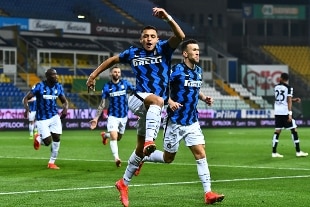 Inter passes 2-1 to Parma and flies to +6 over Milan, stopped at home by Udinese.

Juventus (with one game less) and Atalanta are 10 points below.

At this point the Nerazzurri appear as the team launched in the race for the Scudetto, also taking into account the absence of other commitments, such as European Cups or the Italian Cup.

For the ducals, the situation is dramatic, at 15, penultimate 6 points below the fourth from Cagliari.

Salvation becomes a climb of the sixth degree.

Thus the match that closes the 25th day of the championship, the sixth return.

Immediately work on the 2 'for Sepe who has to intercept a cross from Hakimi.

At 7 'Var called into question for a contact between Man and Barella in the ducal area, all regular.

In the quarter of an hour it takes a great reflex from Handanovič to deny the goal from Kurtić's header.

At 31 'Eriksen does not find time for Hakimi's tap-up service.

At 33 'on the development of a free-kick, Škriniar and Perišić are contained by Sepe and Valenti.

At 45 'Lukaku fails to head from a few steps.

In the recovery of the first time chance also for the hosts with a shot of Man that ends just outside.

Parma returns from the locker room with Mihaila in place of Man, the victim of a game clash in the first fraction.

At 54 'Inter passes with Sanchez who capitalizes on a rebound by putting Sepe with his left-handed, Gagliolo's last-minute attempt in vain.

In the 62nd minute Lukaku escapes irrepressible on the counterattack and offers Sanchez the ball for the Nerazzurri's doubling.

D'Aversa tries to shake his team in the 66th minute with a triple change: Pezzella, Busi and Inglese for Gagliolo, Valenti and Kucka.

A replacement also for Conte: Vidal for Eriksen.

At 71 'one of the newcomers, Pezzella, packs the assist on which Hernani finds the plate that beats Handanovič.

at 84 'it is Darmian's turn for Perišić.

In the middle a header from Mihaila in the arms of Handanovič (79 ').

Parma fails to impose a forcing.

At 85 'there is the debut among the ducals of Pellè, which Hernani takes over.

Despite 4 'of recovery the result does not change.