The fact that minors are used for advertising on social media is not new. But according to a review done by the magazine Summary, as many as one in five posts are advertising. It is thus children who advertise for other children, which is problematic, according to the Advertising Ombudsman. 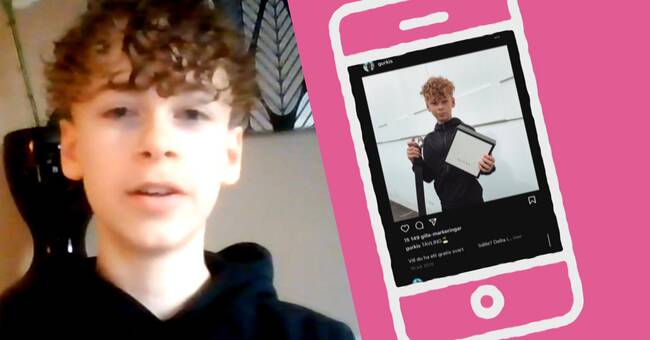 Jacob “Gurkis” Larsson is one of several young influencers who do advertising collaborations.

He is 13 years old and has been approved by his parents to advertise.

- I do it mostly for my followers, so that they have a chance to win things.

But a little for my own sake too.

If you are big in social media, you can still take advantage of it and earn some money, I think, says Jacob "Gurkis" Larsson to Lilla Aktuellt.

But that young influencers advertise for their followers, who are often minors themselves, thinks the Advertising Ombudsman Elisabeth Trotzig is problematic.

- I think it is unfortunate because children do not have the same experience and knowledge to distinguish between what are paid collaborations and what is the influencer's own opinion, she says and continues:

- The influencer is a bit like a friend, there is one in the gang and you want to be a bit like your influencer.

And so you are also reached by commercial messages from this friend, it is a big impact that I think is unfortunate.

It is not illegal for young people to do advertising collaborations, but the marketing law is much stricter when it comes to children and advertising.

And that young people are met by so much advertising on social media, Amanda Törner at the magazine Resumé believes that adults have poor control over.

- Adults and authorities have quite a bit of insight into what it looks like in these channels, because you yourself must have an account to get insight, says Amanda Törner.

She is not surprised by the result, but is surprised that as young as 10-year-olds advertise.

What the influencer earns often depends on how many followers they have.

- It can be money, clothes or discount codes I can hand out, says Jacob "Gurkis" Larsson.

He gets a lot of offers for advertising collaborations, but only says yes to those that his mother says okay to.

One of the companies that uses young influencers is Kidsbrandstore.

- Our target group is young people, so it becomes quite natural to use it given that they are on social media, says Adeline Sterner who is CEO of Kidsbrandstore.

She also says that they should get better at making the posts more accurate.

As it is now, several of their influencer collaborations lack the advertising mark "Paid collaboration with ..." which should be at the top of each post.

- It is good that it is noticed because it is something we need to get better at.