Austria, Denmark and Israel: The Consequences of the Vaccination Alliance

Denmark, Austria and Israel want to tackle vaccine production together - without the EU. Frederiksen and Kurz are sharply criticized for this approach. A meeting on Friday could show how much Austria is really turning away from Brussels. 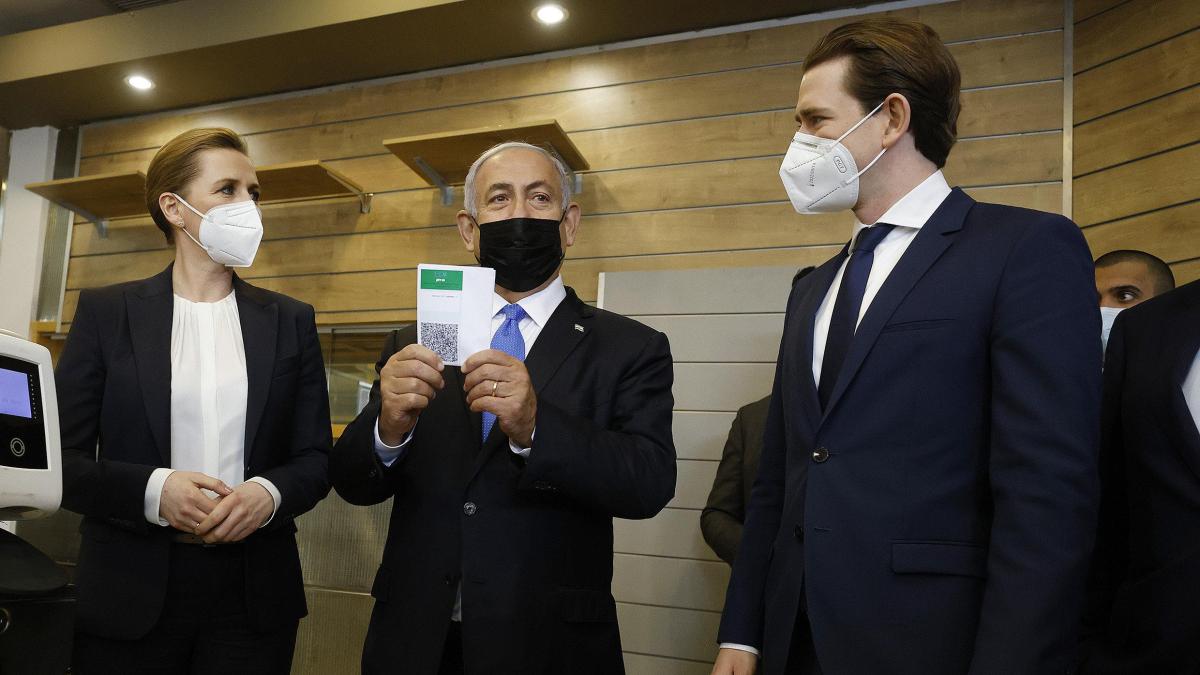 It was the curious start of an important business trip: Denmark's Prime Minister Mette Frederiksen made a stopover at Vienna Schwechat Airport on Thursday morning with the government plane from Copenhagen.

Austria's Chancellor Sebastian Kurz got on, he was in a good mood and beamed at Frederiksen.

Both then flew together to Tel Aviv.

It was a trip that took both countries a little way away from Brussels during the Corona crisis.

More autonomy, more flexibility, more speed in vaccine production - that is the goal.

In short, it is tired of having to rely solely on the "tanker" EU (Ursula von der Leyen) after several mishaps in the European vaccine procurement.

Austria wants to promote the research, development and production of vaccines and tests together with Denmark and Israel.

The vaccination alliance is taking its first concrete steps: All three countries are planning to set up a joint foundation, as the heads of government announced during a press conference that evening.

Israel's Prime Minister Benjamin Netanyahu did not want to commit to a specific timetable yet.

The implementation of the joint project could begin soon, but it should take several years.

Austria is not starting from scratch.

There are already two locations for vaccine production in the Alpine republic: Novartis in Kundl (Tyrol) and Polymun / Pfizer in Orth an der Donau (Lower Austria).

Kurz wants to build on this foundation.

He said: “Experts reckon that we will have to vaccinate two thirds of the population, i.e. over six million Austrians, every year in the coming years.

The pandemic will therefore keep us busy for a long time with the various new mutations for which we have to prepare in good time ”.

Research into "second generation vaccines" is the goal of the new initiative.

Kurz and Frederiksen are pursuing a two-pronged approach: They want to continue to participate in the fight of all EU countries against the corona pandemic.

But they no longer want to rely solely on the EU Commission, which largely coordinates crisis management.

Kurz's new approach is a clear vote of no confidence in Brussels.

Israel, Austria and Denmark had already held regular consultations with Australia, Norway, Greece and the Czech Republic over the past few months during the pandemic.

The heads of government of the federal states interconnected several times via video conference.

Kurz wants to forge vaccination alliances with Israel and Denmark

The EU has not done well in getting vaccines.

Sebastian Kurz has had enough of the common European path.

He wants an alliance between Austria and Denmark and Israel in order to produce vaccines of the next generation faster and himself.

The EU Commission is not amused internally by the initiative, but is largely silent to the outside world.

Kurz had the chance last autumn to play a key role in shaping the EU's course in the corona crisis, Liese said.

In addition, with Clemens Martin Auer as head of the so-called EU steering group, Austria has an important man at the center of the Brussels decision-making process.

“It is not fair to criticize the EU Commission now.

Austria was in the lead with the official Auer, ”said Liese.

“We have taken note of this approach from Denmark and Austria.

However, we are still firmly convinced that the most effective solution to meet vaccination needs must continue to be based on the European framework, "said the Foreign Ministry in Paris.

Solidarity between the Member States is more important than ever.

"That is why it is now a priority to pool our resources in order to increase the production capacity in Europe, which we are also doing."

In February, the Frenchman took over the management of a newly established EU task force on vaccine production in Europe.

The aim of the visit is to exchange ideas on important topics with regard to vaccination strategy and vaccine production in Europe, according to government circles in Vienna.

Specifically, it is also about what role Austria can play in this.

Breton has already visited Italy and the Netherlands.

Before the talks in Vienna he will be in Hungary.