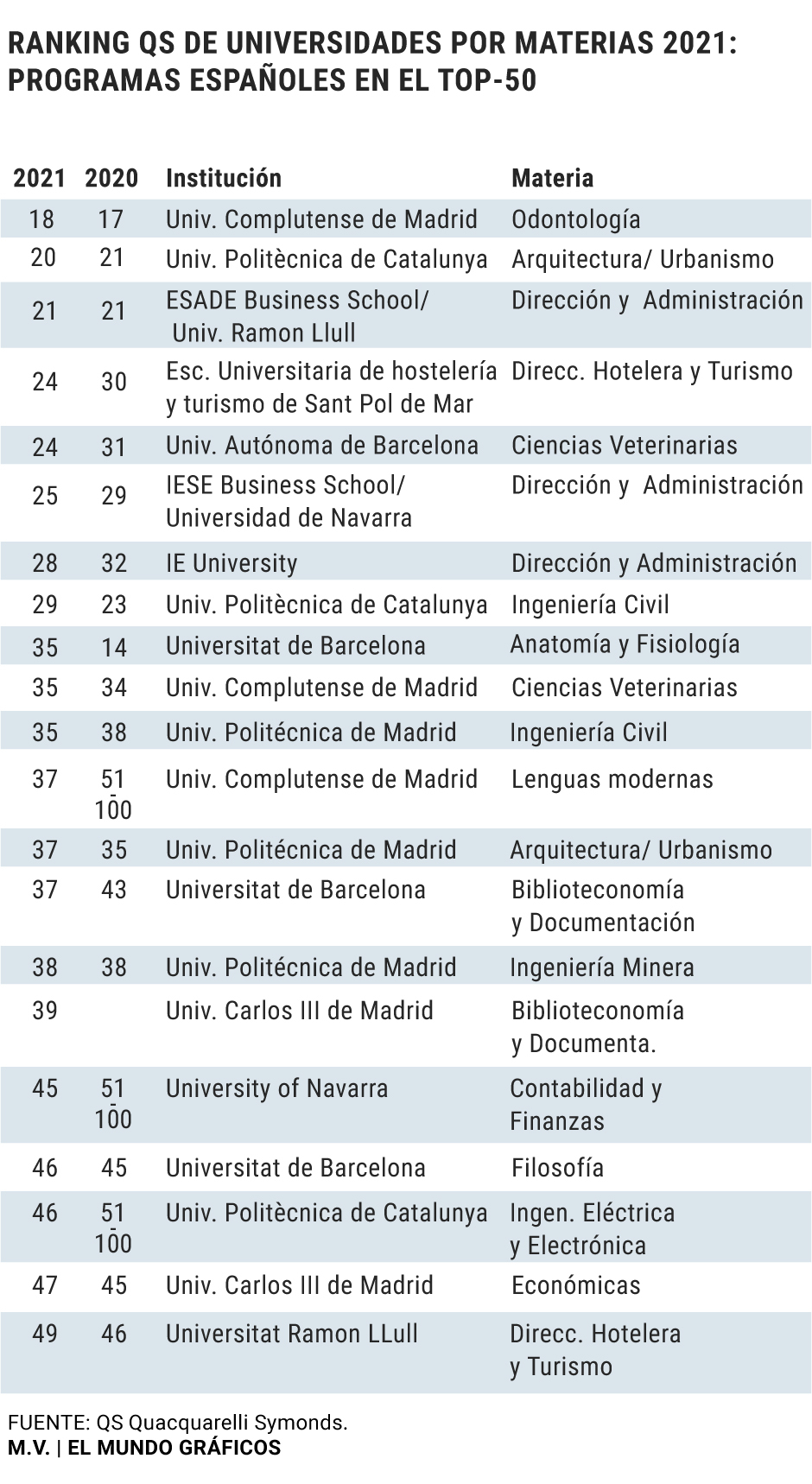 Spanish universities are not very high in international rankings but they tend to stand out quite a lot in those classifications in which they are asked about specific disciplines of knowledge.

Spanish programs are among the

best in the world.

The list, which was published this Thursday, points out, however, that the performance of the campuses in Spain has worsened in the last year:

evaluated programs have dropped points in the ranking, while only

The ranking of the British consulting firm

countries, confirms no longer a stagnation of the Spanish university, as other previous works pointed out, but a generalized worsening, small but enough to worry, in most of the campuses.

The best faculty is that of

, which also loses one position .

, which QS defines as "the most successful campus in all of Spain", stands out in 40 disciplines, but 21 of them have worsened and only four have improved.

The same has also happened at the

(18 programs have dropped compared to three that have improved);

(12 lose points and only one improves).

, spokesman for QS, responds by email that there has been a drop in Spanish universities in the four indicators they use to make the ranking.

"The greatest decrease has been registered in the indicator of academic reputation, which measures the opinions of

professors about university quality," he says.

A worsening has also been detected in research, counted as the times an article is cited by other academics (where the grade has dropped from 80 to 78), in reputation among employers (from 66.1 to 65.1) and in the so

, which measures the productivity and impact of publications (from 71.6 to 69.7).

as an example of good practice

the key by stating that "principles that have worked well for business schools, particularly a focus on internationalization, both for teaching and research offer a guide for institutions seeking to excel in other disciplines. "

And he stresses: "Higher education is becoming more international, not less."

His words are a warning to a university that has one of its main burdens in the lack of internationalization.

Spain is at the bottom of the

in terms of its percentage of foreign students studying higher education (5.7%).

The problem is revealed in the

, a document agreed between the 80 campuses with the main challenges for the future.

It so happens that the path that the

is not the right one to improve internationalization, according to the rectors.

has imposed in her educational law a university entrance exam for foreigners that, in the words of campus representatives, "will stop the arrival of students from other countries."

, on the other hand, wants to eliminate the flexibility of the careers with a model in which all degrees will have to last four years, prohibiting the possibility that there are some that last three years, as up to now, measured to the that the rectors also oppose.

Moran is against the purpose of Castells, which obeys a demand from

"We do not believe that there is a single ideal duration for college degrees. It is important that students are incentivized to graduate and bring their skills to the workplace when they are ready. No one benefits from taking longer, except in very specific fields like the

"What we are seeing is an increase in the levels of flexibility in the offer of degree programs," he emphasizes.

"Universities are increasingly realizing that a degree is not a career, but a method of providing the skills and knowledge to be successful in life."