Serie A. Milan are saved in extremis, equal with Udinese on a penalty by Kessié in the 97th minute

At San Siro it is 1-1, with the Friulian who go on with Becao. Fifth of Atalanta on Crotone, Cosmi's first time on the Calabrian bench is not happy. A tenacious Roma wins 2-1 Florence. The derby between Genoa and Sampdoria is equal 1-1, Cagliari's success in the rear while Benevento is overwhelmed at home by Verona 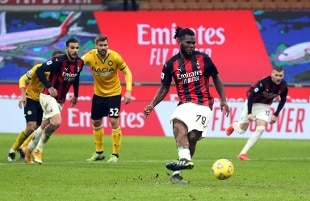 03 March 2021Udinese go within seconds of the bang at San Siro at the expense of Milan, saved in the queue to recover from the penalty of Kessié.

The 1-1 is still an assist for Inter, who can extend to the top in the postponement of the midweek round.

Roma's redemption, 2-1 at Fiorentina, Atalanta rejoins Juve in 3rd place with a resounding 5-1 against the rear of Crotone.

1-1 draw between Genoa and Sampdoria in a flat derby.

In the queue the Cagliari of the new management Semplici gets the second victory in a row, 1-0 to Bologna, and continues the chase for salvation.

Collapse, however, of Benevento overwhelmed 3-0 by Verona at the 'Vigorito'.

Not a great Milan the one seen at the 'Meazza' against the Friulians.

In the first half only a good chance for Castillejo, who ends weakly in front of Musso.

The recovery is more lively, but great merit goes to Udinese.

In the 49th minute, on a mess by Hernandez, Pereyra's cross, Nestorovski's gored and Romagnoli saves on the line to Donnarumma beaten.

Excellent reflections of Musso on Meité and Kessié.

Udinese surprises in the 68th minute, when Becao heads up from a corner, Donnarumma blatantly misses the intervention, perhaps expecting a close detour.

Milan just can't find the spaces to try to sting.

Stryger Larsen saves him from the knockout, putting his hand on Rebic's cross when the clock marks 95 minutes (the last of recovery).

From the spot, when we are at 97 ', Kessié goes and confirms himself infallible.

Cosmi's' first 'on the Crotone bench was not easy, but in Bergamo the Calabrians dreamed for 45'.

Gosens' goal in the 12th minute seems to direct the game towards its most anticipated score.

But at 23 'Atalanta messes up and Simy takes the opportunity to equalize.

The Pythagoreans hold up until the start of the recovery.

Palomino, on a corner kick, and Muriel, on a gift from Golemic, sign the Orobic break at 48 'and 50'.

Ilicic drops the poker in the 58th minute, Miranchuk puts the exclamation point in the 84th minute.

Roma redeem themselves in pursuit of the Champions area.

Spinazzola does and undoes in a few minutes: in the 48th minute great shot on the fly from Mancini's pocket, at the 60th naive own goal (he was not pressed) on Ribery's cross to crown a counterattack.

Dragowski hypnotizes Mayoral face to face, Ribery concludes a good personal initiative on the side.

Pau Lopez says no to Vlahovic who shoots from an excellent position.

But it is Rome that constantly holds the initiative and passes with the 'Var thrill' at 88 '.

The cross is from Karsdorp, the insertion to the kiss is from Diawara (who had started the action).

The 123rd derby of the Lanterna was not a memorable match.

Sterile attacks, goals are the prerogative of two defenders.

After a first half at a picnic pace, Zappacosta moved the score, leaving Tonelli on the spot on Strootman's throw (52 ').

Tonelli himself is forgiven in the 77th minute with the winning detachment from Candreva's corner.

Identical result of the first leg, Samp rises to the comfortable share of 31 points while the care Ballardini puts Genoa in safety now at an altitude of 27.

In the 'danger' area, Benevento collapses at home under the blows of a tonic and ruthless Verona.

Faraoni opens in the center of the area by Lazovic (25 '), Foulon's clumsy intervention for an own goal in the 34th minute, Barak's crossbar in the 38th minute.

The Samnites absent unjustified even in the second half.

Rounds Lasagna (50 ') which then devours a personal double and poker.

At the 'Sardegna Arena' a defender, Rugani, decides, who in the 19 'stands out on Marin's corner.

The Sardinians rise to 21 points, momentarily out of the relegation zone, quiet Felsinei at 28, Benevento (25) begins to smell burnt.