Since the military coup in Myanmar, violence against demonstrators has escalated. On Wednesday there were at least 38 deaths - the "blackest day", according to the UN. In total, more than 50 people have died in the past few weeks. 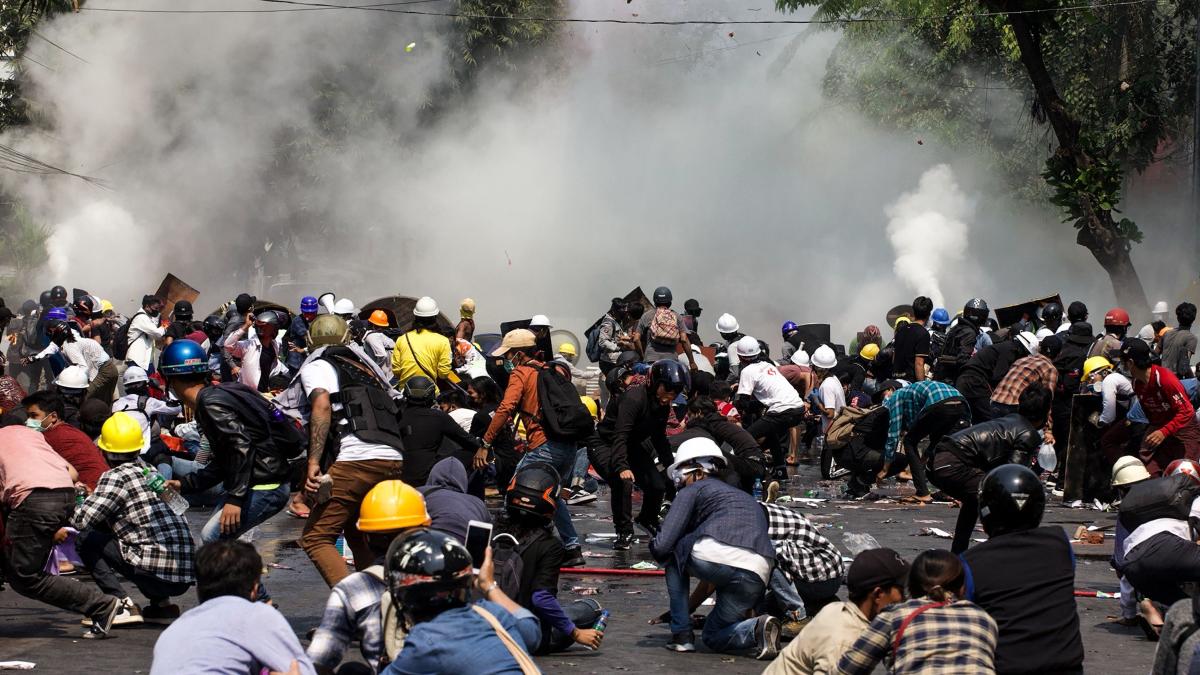 After the military coup in Myanmar, violence against demonstrators has reached a new level.

“Today was the blackest day since the February 1st coup.

In total, more than 50 people have died in the past few weeks.

She reported "very disturbing" videos showing violence and the apparent shooting of a protester.

"It seems that the police are using weapons such as nine-millimeter submachine guns, ie live ammunition." Shocking images of corpses covered in blood circulated on social networks.

According to reports, one young man was shot dead in Myingyan in northern Myanmar and another in Mawlamyine in the south.

Two other protesters, a 37-year-old man and a 19-year-old woman, were killed in the city of Mandalay, as the portal "Myanmar Now" wrote.

"There were about 20,000 demonstrators on the street, and I am sure that the security forces belonged to the army," said a local journalist from the German Press Agency.

In the former capital, Rangoon, the hotspot of the protests, there were at least seven victims.

Wednesday was already the 30th day of resistance against the military.

According to estimates by activists, more than 1,300 people have been arrested, at least temporarily, since the coup in early February - the United Nations says 1,200.

The military had put a coup against the de facto head of government Aung San Suu Kyi about a month ago.

The generals cited irregularities in the November parliamentary elections as the reason.

Suu Kyi won this by a clear margin.

Observers did not document any signs of major electoral fraud.

The 75-year-old Nobel Peace Prize laureate Aung San Suu Kyi has been under house arrest since the coup and has to answer for various allegations in court.

The demonstrators are calling for the former icon of freedom to be reinstated as head of government.

Suu Kyi had been under house arrest for 15 years during the almost 50-year military dictatorship.

At that time the army had ruled the country with an iron hand and suppressed any resistance with brutal severity.

"All available tools are now required to end this situation"

Schraner Burgener urged the international community to act to reverse the coup and end the violence.

“All available tools are now needed to end this situation and we need unity in the international community.

So it is up to the member states to take the right measures, ”said the UN envoy, who says she is in contact with the military leadership.

She is also in talks with EU countries - including Germany.

A UN Security Council meeting on violence in Myanmar is planned for Friday.

Pope Francis again expressed his concern about the conflict: "I appeal to the parties involved that dialogue should gain the upper hand over the suppression," wrote the head of the Catholic Church on Twitter.

He called on the international community "to ensure that the aspirations of the people of Myanmar are not stifled".

In February, Francis had requested, among other things, the immediate release of arrested politicians.