Hong Kong: a black day for democracy and human rights

In Hong Kong, 47 democracy activists have been charged under the controversial "security law". It looks like this is just the beginning of a major transformation of the political system. Because the date of the indictment brings back dark memories. 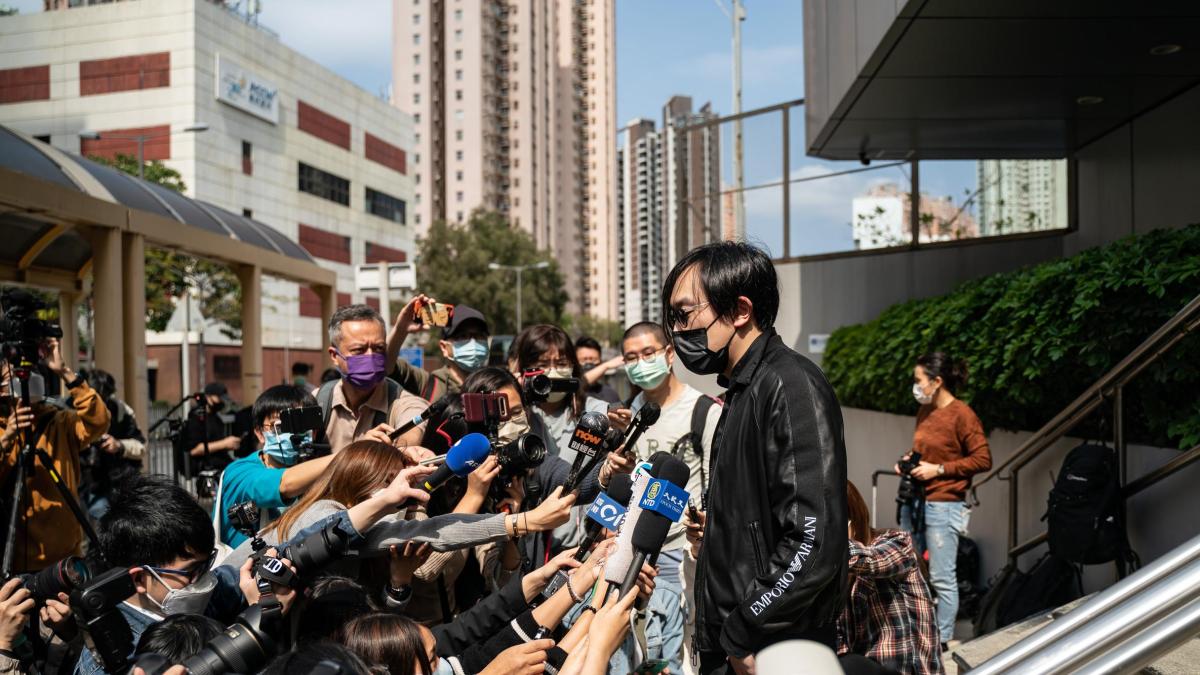 Chinese politics is - much more so than politics in the West - permeated with symbolism: with hints and analogies that are often only accessible to those who are familiar with Chinese history.

This is also the case with the recent police action in Hong Kong.

47 democracy activists were indicted on Sunday in the Chinese Special Administrative Region.

You should answer in court on Monday.

The authorities accuse them of "conspiracy to overthrow".

The date, February 28, makes you sit up and take notice.

Because in the political symbolism of the Chinese world it stands for the beginning of oppression and terror.

During the Chinese civil war between the communists and the nationalists of the Kuomintang (KMT), KMT troops fled to Taiwan.

There tensions arose with the long-established population.

And when the unrest broke out on February 28, 1947, the KMT troops crushed them with violence.

The February 28 massacre marked the start of a series of murders that are estimated to have killed up to 30,000 Taiwanese people.

It marks the beginning of “white terror”: a phase of oppression and persecution that lasted almost four decades - legalized by the imposition of martial law.

Over 50 opposition members locked up in one day

On January 6, more opposition activists were arrested in Hong Kong than ever before.

They are accused of violating the controversial National Security Law introduced by China.

It's about an area code last summer.

The 47 activists accused belong to a group arrested in January on the basis of the "security law".

The group held a pre-election last July - which the authorities are now interpreting as a "coup attempt".

In the primary election for the parliamentary election, which should actually have taken place in September, the aim was to filter out candidates who had great support from the population.

However, the parliamentary election was later canceled - officially because of the pandemic.

Among the accused is Joshua Wong, who is also a columnist for WELT AM SONNTAG.

Wong is already behind bars.

He was sentenced to 13.5 months in prison in December.

Benny Tai also belongs to the group of accused, a moderate intellectual who is considered to be one of the initiators of the 2014 “umbrella revolution”.

What is new is that the 47 activists are being charged on the basis of the “security law”.

This threatens them - if convicted - life in prison.

The indictment is thus the largest police action so far based on the "Security Act".

It shows that the law not only serves as a threat, but that the authorities use it as a tool of repression.

Since the introduction of the “Security Act” last summer, the authorities have been taking rigorous action against the democracy movement.

Today, all of Hong Kong's prominent democracy activists are either in prison or in exile.

But it looks like the indictment is just the start of a major transformation of the political system.

The most important event on the political calendar begins next Thursday in Beijing: the “two sessions”, that is, the plenary session of the National People's Congress and the Political Consultative Conference of the Chinese People.

More than 5000 delegates will travel to the Chinese capital for this purpose.

And according to reports from Chinese party media, Hong Kong will be one of the top items on the agenda.

In the past few weeks, China's propaganda media have been lamenting "loopholes" in Hong Kong's electoral system.

They concluded that it endangered national security when “non-patriots” were in office - and called for a revision of Hong Kong's electoral law.

Finally, Xia Baolong, the head of the office responsible for the Hong Kong and Macau Special Administrative Areas, joined the chorus: Hong Kong must be ruled by "patriots".

According to other reports, China's leadership plans to present a bill at the “two sessions” next week obliging Hong Kong's politicians to be patriotic.

It can be assumed that the draft will be adopted by a large majority.

In plain language this means: The People's Republic would only give access to political office in Hong Kong to those politicians whom Beijing regards as “patriots”.

The mass indictment and the draft law for the "two sessions" show: Beijing is working in Hong Kong with several tools to never allow something like the demonstrations of 2019 to occur again. At that time, protests raged for months, some of which escalated into violence.

Criminalization of the democracy movement

The "security law" serves in this plan as the tool with which the democracy movement is criminalized.

And the restructuring of the political order is the tool that is supposed to ensure that politicians critical of Beijing no longer get into leadership positions in the first place.

To stay with the political symbolism of the Chinese world, February 28th is a black day for democracy and human rights.

However, one should not forget that in Taiwan the date does not only mark the beginning of oppression and terror.

It also fueled the emergence of the Taiwanese democracy movement.

And this achieved in 1987 that martial law was repealed.

This laid the foundation for Taiwan's democratization.

Today, February 28th is a memorial day on the island.

February 28th is likely to fuel the emergence of a new democracy movement in Hong Kong as well.

But it may take several decades for the fruits of this movement to emerge.

"Activists were brutally tortured and sexually harassed at the police station"

Activists have taken to the streets again in Hong Kong for free elections.

Joshua Wong, spokesman for the demonstrators, now appeals to all nations to support the protests.