US President Joe Biden scored his first legislative victory when the House of Representatives approved a $ 1.9 trillion coronavirus relief package early yesterday morning. The Democrats who control the House approved this strong measure through a mostly party-based vote of 219 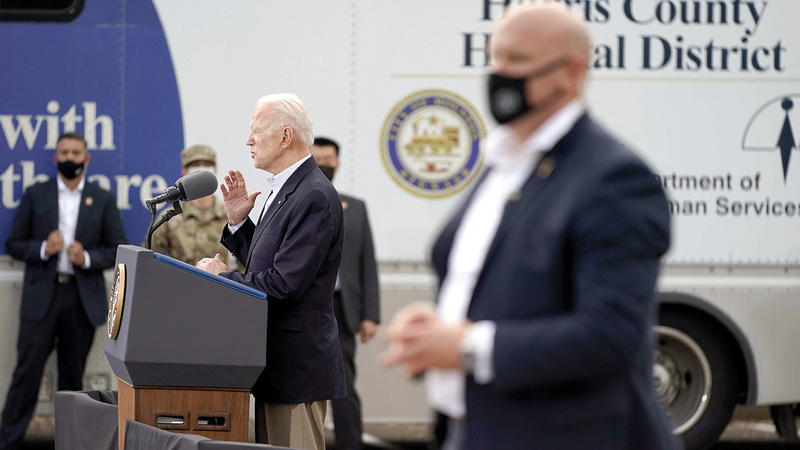 Biden inspects damage in Texas after a strong storm

Biden speaks during his visit to the Corona Vaccination Center in Houston, Texas.

Democrats who control the House approved the robust measure with a mostly party-based vote of 219 to 212, and sent it to the Senate, where Democrats plan a legislative maneuver to allow them to pass it without Republican support.

The US rescue plan will pay for vaccines and medical supplies and provide a new batch of emergency financial aid to families, small businesses, state governments and local administrations.

Democrats said the package was necessary to combat a pandemic that has killed more than half a million Americans and made millions unemployed.

House Speaker Nancy Pelosi said during the session: "The American people must realize that their government is there for them."

Yesterday's vote in the House of Representatives represents the first successful test for the Democrats, who enjoy a slim majority of 221 members compared to 211 in the House.

On the other hand, the US President inspected the damage that the state of Texas suffered as a result of a strong storm, accompanied by the first lady and senior officials in the state from the Republican and Democratic parties, and called during his first visit as president to a disaster area for unity.

The American newspaper "Los Angeles Times" quoted Biden as saying at the conclusion of his visit to the Corona virus vaccination center in Houston: "When our states are exposed to a disaster, the one who is affected is not a Republican or a Democrat, but an American citizen."