Yesterday one of the lawyers of the Russian opponent had reported the transfer from the Moscow prison&nbsp; 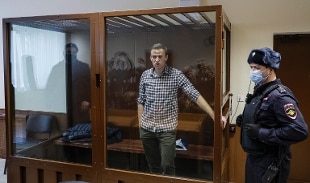 The head of the Russian prison services said this after one of his lawyers, Olga Mikhailova, yesterday denounced the transfer from the Moscow prison and suggested that he may have been taken to a penal colony to serve a sentence of two and a half years in prison. .

"He was moved to exactly where he needs to be under the court ruling," said Alexander Kalashnikov, head of the federal prison service, not revealing the name of the prison but insisting that Navalny would serve his sentence under "conditions. absolutely normal ".

"I guarantee that there are no threats to his life and health," he stressed.

Last week the European Court of Human Rights ordered Russia to release Navalny, arguing that her life was in danger in prison, but Moscow denied the request.