Two underage accomplices were traced to a B&amp;B used by the baby gang as a den, the third also a minor was at home. A girl reported for aiding and abetting 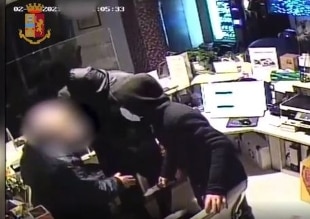 February 25, 2021 They robbed a hotel, tied the wrists of the night porter and fled on a scooter, hooded and wearing a mask.

A twenty-year-old and three minors were arrested by the police in Turin for robbery and kidnapping.

The strike had been planned in the playgrounds, but something went wrong because the goalkeeper managed to free himself and give the alarm to the police, who immediately stopped the twenty year old.

Two underage accomplices have been found in a B&B used by the baby gang as a den;

the third, also a minor, was instead at home.

A girl reported for aiding and abetting.

The incident happened in a hotel in via Principi D'Acaja, in a central area of ​​Turin.

When the 20-year-old was stopped, he still had the brown packing tape he used to tie the goalkeeper's wrists with him, as well as a hundred euros.

Also seized a knife and a balaclava.

Two of the three minors were instead stopped in a host in Corso Giulio Cesare, on the northern outskirts of the Piedmontese capital.

One of the two wanted boys was hidden in the closet of another room.

The agents also confiscated some items of clothing that coincide with those worn by the robbers.

All three minors were subjected to arrest, then validated, for the same crimes charged to the adult: robbery and kidnapping.