Sentenced to pay 100,000 euros for denigration of Bordeaux wines

The Libourne court considered that the association had published an article on the results of analyzes, "denigrating" for the industry. 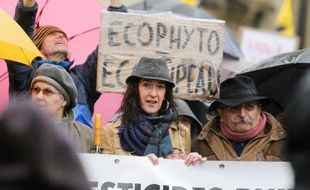 Valérie Murat is the president of Alert to toxics.

This is a first setback for the Alerte aux toxins association, whose president was being sued by the inter-profession for denigrating Bordeaux wines.

This Thursday, the Libourne court ordered Valérie Murat to pay 100,000 euros in damages.

It will also have to remove, within fifteen days, any article damaging to the reputation of Bordeaux wines under penalty of paying a fine of 500 euros per day.

“We are now satisfied with this court decision.

It takes into account the prejudices that we have collectively suffered and reminds everyone that denigration cannot remain without sanction, ”Bernard Farges, President of the Interprofessional Council for Bordeaux Wines (CIVB).

The association will appeal

“Bad times for whistleblowers, reacts to

The air seems stale in Libourne, it is confirmed.

The so-called wine country protects the worst in wine ”.

In September 2020, his association revealed the presence of pesticide residues in 22 wines (including 19 from Bordeaux) certified High Environmental Value (HVE), highlighting a deception for the consumer.

The inter-profession replied that the concentrations (measured on tanks and not the bottles) were very low and remained below the legal thresholds attached to this label (which does not prohibit synthetic chemicals).

Worried about its image, the CIVB had lodged a complaint against the president of the association, considering its products denigrated.

"These denigrating remarks, formulated publicly and massively relayed, proceeded from a malicious intention with regard to the wines of Bordeaux and aimed to cast a demonstrable discredit on the products of the Bordeaux winegrowers and on the fundamental work that they have carried out for so long. years, ”notes the interprofession in a press release, after the announcement of the judgment.

The only right that the client has not yet been deprived of is the right to appeal, she will do so without delay and will go to the end.

Never has a gag order been so aptly named ”.

The appeal is not suspensive and the publications of the association in question must be withdrawn before a new examination of the case takes place.

Pesticides: Compensating farmers, a solution to limit their use?