&nbsp;If the parents had not paid the fine, the children would not have received their identity documents 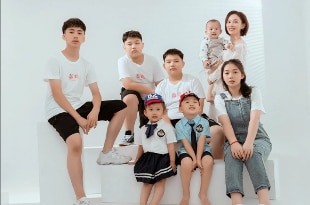 February 25, 2021 They challenged the Chinese government's two-child policy, which fines violators of the rule.

Zhang Rongrong, 34, and her 39-year-old husband were happy to pay the "price" for a far in excess of children who she says are just "perfect."

Zhang's family paid the local government more than 1 million yuan (127,000 euros) in "social support tax" - effectively a fine - for the privilege of giving birth to more than the permitted number of children.

Up to six years ago, most women in China could have only one child. If the parents had not paid the fine, the children - five boys and two girls, some twins, aged between one and 14 - would not have received the their identity documents.