Alitalia: thousands in front of the Parliament. Unions: "Unsustainable situation"

Friday the dossier on the table of Mise, Treasury and Infrastructures. The special commissioner announces that workers' wages for February will be paid in March 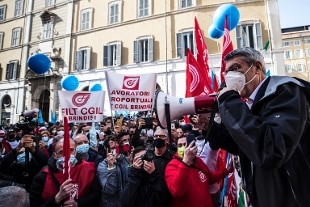 February 25, 2021The February wages of Alitalia workers will be paid on March 1. According to union sources, the extraordinary commissioner Giuseppe Leogrande said this. Last Tuesday Leogrande announced to the unions that February wages would be paid late.

This is the only good news of a day spent by Alitalia workers in front of Parliament asking for urgent and decisive action.

Unions divided on the strategy to adopt to start a confrontation with the new Draghi government on air transport. Today a demonstration was held in front of Montecitorio, called by Filt Cgil and Uiltrasporti and in which Ugl also participated, while Fit Cisl preferred to present its own manifesto of proposals to the new executive.

At the basis of the division there would be a diversity of views on whether to hold a demonstration before meeting the new executive. At the moment, however, a discussion with the trade unions on the air transport sector has not been set by the new government. On the other hand, the meeting next Monday at MIT with Minister Enrico Giovannini and the trade unions remains confirmed, but on the entire transport system, while tomorrow the Minister of Economic Development, Giancarlo Giorgetti will see his colleagues at the Treasury and Infrastructures on the Alitalia dossier.

Landini: "The Mise has not summoned us"

"No call on Alitalia has arrived from Minister Giorgetti. Today's demonstration asks that the discussion however not take place with a ministry, but with all those involved. An overall table should therefore be activated. on the airport system. If we think about it, this sector is Italy's calling card in the world ". Thus the general secretary of the CGIL, Maurizio Landini, on the sidelines of the demonstration in Montecitorio by air transport workers.

The EU has not authorized the last 55 million tranche for Covid Refreshments and the resources available are running out. On Friday we should also talk about the transfer of the carrier's assets under extraordinary administration. The move to Ita is effectively blocking the story, with no concrete signs of interest from subjects such as Lufthansa. A stalemate that worries the trade unions and that sounds all possible alarms in the transport sector, given that 40,000 permanent jobs are at immediate risk, as well as 10,000 seasonal and fixed-term jobs. "The message to the government is: let's confront immediately, the sector's plan is frighteningly inclined towards disaster. With Alitalia representing only the most visible tip of the iceberg.

"Air transport is suffering from a world crisis and the Alitalia question, its crisis , hinges on an international perspective. This goes beyond the solutions adopted. The more the global vaccination plan will run, the sooner the crisis will emerge ''. So Marco Miccoli, head of work in the secretariat of the Democratic Party, to the microphones of Radio Immagina, the web radio of the Democratic Party. '' The concerns of the trade unions are more than legitimate ", adds Miccoli.

On the Alitalia dossier" there are private investors who are reappearing, I personally am talking with some of them ". So Matteo Salvini on the future of Alitalia. "Alitalia is an inherited dossier, we cannot lose a national airline, we will do everything to save not only jobs, but to relaunch".

"A change is urgently

for the future of Alitalia. The semi-paralysis of air transport due to Covid determines an unsustainable cash situation for the company in extraordinary administration, in great difficulty in paying salaries and suppliers ". This was declared by Stefano Fassina, deputy of LeU, in Piazza Montecitorio at demonstration of Alitalia workers. "Ita, the newco of the State with 3 billion euros, is not yet in a position to start because the perimeter of assets inheritable from Alitalia is uncertain. We hope that in tomorrow's meeting, convened by Minister Giorgetti, clear indications can also arrive regarding the requests of the European Commission. Welcoming them would mean resigning oneself to a small regional carrier ".

FdI:" Nobody pappi the company "

" We asked Prime Minister Draghi for a relaunch of our national airline, making it competitive on the foreign market also making the mobility system more efficient: motorways, high speed , ports, airports, logistics and intermodality. Given the great attention of some foreign carriers, we will oppose anyone who wants to 'eat' Alitalia because it would mean impoverishing our tourism, weighing down the trade of our typical products, plunging our cultural, naturalistic and archaeological assets into a postcard ". declared Fabio Rampelli, vice president of the Chamber and deputy of Fdi.