China News Service, February 24. What kind of exploration has been done in the Pingtan Comprehensive Experimental Zone in Fujian Province to promote the development of cross-strait integration and what results have been achieved? At a regular press conference held by the Taiwan Affairs Office of the State Council on the 24th, spokesperson Ma Xiaoguang gave an introduction. Data map: The “Strai 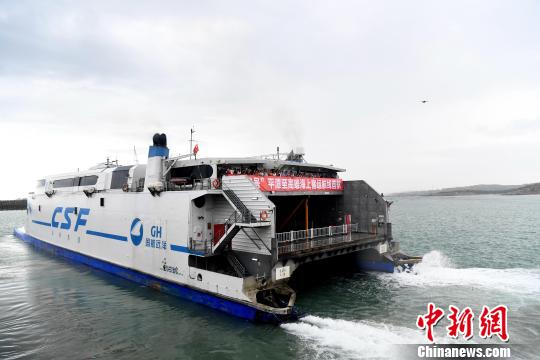 China News Service, February 24. What kind of exploration has been done in the Pingtan Comprehensive Experimental Zone in Fujian Province to promote the development of cross-strait integration and what results have been achieved?

At a regular press conference held by the Taiwan Affairs Office of the State Council on the 24th, spokesperson Ma Xiaoguang gave an introduction.

Ma Xiaoguang stated that the Fujian Pingtan Comprehensive Experimental Zone has conscientiously implemented the spirit of the important speech delivered by General Secretary Jin Ping at the 40th Anniversary of the "Message to Compatriots in Taiwan" and during the review of the Fujian delegation during the National "Two Sessions" in 2019, and strive to explore the cross-strait Integrate and develop a new road, and strive to build the first home for Taiwanese compatriots and enterprises to land.

One is to implement the same treatment for Taiwanese compatriots and Taiwanese enterprises.

Actively provide policy support and guarantee, focus on pioneering trials, and introduce more than 50 policy measures in industrial cooperation, financial taxation, and social security to effectively enhance the sense of acquisition and belonging of Taiwan compatriots.

Create an offline service window and set up a "Taiwanese Enterprise Service Center", which integrates 164 administrative approvals and public service items in 8 categories, allowing Taiwanese and Taiwanese enterprises to "enter a door and do everything."

Build an online service platform to make it easier for Taiwanese compatriots to work and live in the experimental area.

Up to now, Pingtan’s direct sea flights to Taiwan have transported more than 1 million passengers, with nearly 1,300 registered Taiwanese companies, and the number of permanent residents in Taiwan has increased 3.5 times over 2017.

The second is to actively promote the "new four links" across the strait.

In terms of promoting the smooth flow of economic and trade cooperation, it is the first to achieve full coverage of direct passenger and freight sea routes to Taiwan's north, central and southern Taiwan. With the opening of the Pingtan section of the Beijing-Taiwan high-speed rail in October 2020, the role of the channel will become more prominent.

Cross-strait agricultural and fishery product trade, sea express mail, and cross-border e-commerce through the "Pingtan-Taipei" and "Pingtan-Kaohsiung" channels have maintained rapid growth of 40%-60% in recent years.

In terms of promoting infrastructure connectivity, it participated in the planning of the construction of the "Taiwan Strait Channel", and explored the opening of China-Europe and Central Asia international freight trains departing from Pingtan or connecting to Zhengzhou.

In terms of promoting the interoperability of energy resources, we will give full play to the advantages of port shipping in the experimental zone, actively explore new paths for Taiwan's energy supply, and promote the establishment of a shipping supply base across the Strait.

The third is to focus on exploring new ways to integrate cross-strait grassroots governance.

Creatively carry out the pilot work of cross-strait grassroots integration, promote two-way exchanges between the grassroots of the two places, introduce Taiwanese community builders, actively participate in and help the revitalization of rural industries, innovate management models, and promote the complementary integration of grassroots governance advantages across the strait.

The fourth is to carry out in-depth cultural exchanges with characteristics across the strait.

Based on the prehistoric culture, coastal defense culture, clan family, folk customs and other resource advantages common to both Lantai and Taiwan, various forms of exchange activities such as the Common Home Forum and the exchange meeting of village chiefs on both sides of the strait will be held to enhance the family relationship between compatriots on both sides of the strait.

Ma Xiaoguang said that in the next step, the Party Working Committee and Management Committee of the Pingtan Experimental Zone will further "plow the experimental field and be a good ferryman" to play an advantageous role and make special contributions to deepening the development of cross-strait integration.