It is Jean-Paul Garraud, rather than the mayor of Beaucaire Julien Sanchez, who will challenge the outgoing socialist Carole Delga in the regional elections on June 13 and 20 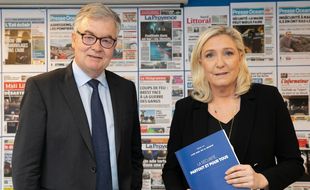 Jean-Paul Garraud, head of the RN list in the regional elections in Occitanie, alongside Marine Le Pen on February 26, 2020 in Paris.

The National Gathering announced it on Tuesday: the former elected LR Jean-Paul Garraud, who became an RN MEP in 2019, will lead the party list in Occitanie during the regional elections set for June 13 and 20, in the hope of attract votes to the right.

The former LR deputy of Gironde (2002-2012), born in Toulouse and who now resides in this region, received the support of the influential RN mayor of Perpignan Louis Aliot, whose "opinion counts" according to a senior frame.

He will face the outgoing socialist president Carole Delga.

Former magistrate, Jean-Paul Garraud (64) is the main author of the RN's counter-proposal on separatism.

He was also rapporteur for the law of 2010 which prohibits the concealment of the face in public space, as with the full veil.

Towards a rally of Robert Ménard

This candidacy makes it possible in particular to rally the mayor of Béziers Robert Ménard, fervent supporter of "the union of the rights", who had thought of running with the LR mayor of Montauban Brigitte Barèges, recently sentenced to five years of ineligibility.

RN spokesperson Julien Sanchez, mayor for seven years of Beaucaire (Gard) and president of the RN group in the region, was also a candidate to lead the RN list, asserting his “local presence” and his “legitimacy as principal opponent ”to Carole Delga.

Several elected representatives of the regional council had sent a letter to the party's authorities to defend his candidacy.

Regional in Occitania: A left dispersed like a puzzle under the threat of the National Gathering

Regional 2021 in Occitania: Carole Delga (PS) officially candidate for her succession to the presidency of the region