After men have monopolized Sufi singing, a Moroccan woman establishes a women's group for the Issawiya song

Early signs of Moroccan talent, Fatima Zahra Al-Hashabi, went up to the cultural centers' platforms to sing children's songs in their eighth spring, and then at the age of 14, she founded a special band for religious singing. 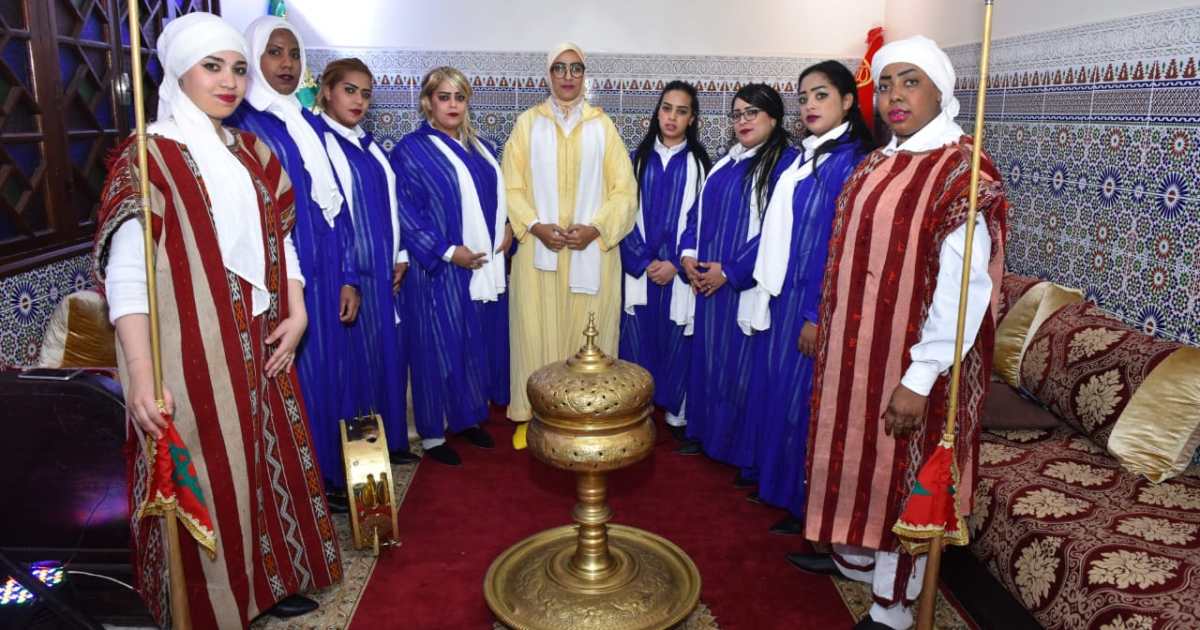 Early signs of singing talent appeared in Moroccan Fatima Al-Zahra Al-Hashabi. She went up to the stage of youth houses, cultural centers and associations to sing children's songs in her eighth spring, and then at the age of 14, she founded a special group for religious singing.

She performed for years at women's parties and weddings, and became a well-known singing face in Marrakesh, before it was decided to establish the first women's group of the Issawiya folk song in the red city "Marrakech".

It was not difficult for this young woman, who exercises her voice in religious chanting and committed singing, to break into "Eisawit" the popular name for the art of Esawah, which since its inception has been associated with men.

The Banat Issawa group, founded by Fatima Al-Zahra a year and a half ago, includes 10 women, most of whom are fond of this authentic Sufi singing.

She tells Al-Jazeera Net that her companions are not strangers to this art. They are either girls who are "teachers" in Issawa groups, or they come from families who have inherited a love for this singing style.

Fatima Al-Zahraa recounts the beginnings of establishing the Girls' Ensawa group, and how the women who attended concerts in which some of the Issawiya sects sang asked her to establish a special group for this singing and activate the concerts of Essawiya, as well as many of the "teachers" of Issawah in Marrakech, who encouraged her and pushed her to take this step. .

And she added, "With the founding of the group, invitations flocked to us to perform concerts and nights of Issawiya, and there was a void in the female voice of Issawi in Medina, and we were trying to fill it."

Morocco is famous for the music of Issawa, a music related to the Sufi order of Issawiya, founded by Sheikh Muhammad al-Hadi bin Issa, who is known as Sheikh al-Kamil, and this method at its inception borrowed its origins from the Jazuliyya Shadhili order, like other tariqas, which appeared in Morocco in the 16th century.

According to the book of the teacher of Morocco, this method used to play the role of spiritual education, so its followers gathered to worship, recite the Holy Qur’an and read the "Subhan al-Dayem" party, which the Sheikh Al-Kamil established and included many of the rules of monotheism. And supplications, cheer and prayer on the Prophet.

Zawiya Issawiya has many followers inside Morocco, and it has corners in various Moroccan cities, especially the corner of Meknes, which attracts arrivals from the cities of Morocco and North African countries on the occasion of the Prophet’s birthday, where the Sheikh Al-Kamil Season is held around a mausoleum founded by Sultan Muhammad bin Abdullah in 1190 AH.

According to the same source, the custom of chanting leaked to the Issawiya sect, as it leaked to other sects as a result of being affected by the ways of the Mashareqah, so the ceremonies of their followers became musical events in which popular groups meet with varying cultural, economic and social levels.

The practice and circulation led to the emergence of groups whose activity is confined to chanting dhikr and supplications to rhythms and rhythms away from other ritual practices, and thus these groups turned into musical artistic groups that practice a special type of Sufi folk singing that has its components, which distinguish it from other singing arts.

The music of Issawiya, then, is an extension of the Sufi doctrine of Issawi, singing poems and praises passed down from generation to generation without addition or change in speech or rhythm, and one of its advantages is that it addresses the soul and the body, and gives the rhythm a great importance, unlike other Moroccan Sufi orders, which rely only on remembrance and praise without rhythm .

The Issawiya bands use a number of musical instruments.

These include drums and strings (a type of flute), and flutes (tambourines with copper discs added to their wooden sides).

Al-Issawi's singing was the preserve of men, before it was stormed in recent years by women's groups that appeared in Meknes, Rabat, Agadir, Casablanca and Oujda, and then finally in Marrakech.

Fatima al-Zahra says that the Issawiya song has many lovers and lovers, all of whom are lovers of Sufism, who like to hear its words and interact with its rhythms, which range from light to fast, so they are keen to attend the nights of Issawah or organize them in their homes.

The women found in the girls' teams of Issawa an opportunity to live spiritual moments in a private and comfortable atmosphere without mixing with men.

The girls ’group of Issawa Marrakesh, headed by Fatima al-Zahra al-Hashabi, wears a special dress for these popular groups, which is a jilbab or a handira (a woolen cloak without sleeves and has red lines).

And to join the Issawa group, there are conditions - as Fatima al-Zahra says - it is not possible for a person who is not inclined to spiritualities and mysticism to love or sing unhappy ones, for it is not just music or singing.

Rather, it is a male and a spiritual ascension.

And she adds, "I am fond of this lyrical color, his words touch my heart and the rhythm is dragging me to another world. Therefore, when I sing, my feelings converge with the feelings of the audience and our selves all vibrate with remembrance and rhythm."