Coronavirus, Israel reopens for all vaccinated 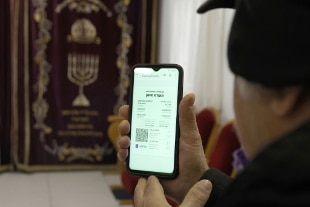 February 21, 2021 Israel attempts a return to normalcy, albeit partially.

In fact, for holders of the 'Green Pass' it is possible to reopen most of the activities: it is the double vaccination certificate that allows access to certain spaces only to those who are vaccinated or recovered from Covid-19.

, open-air markets, shopping centers, libraries and museums, albeit with strict prevention rules and with the obligation to wear a mask and comply with the distancing rules.

in the fifth and sixth year of primary school and the last two years of middle school can return to the classroom in areas with a low rate of infection, following the youngest pupils of the first years of primary school who have returned to school more than a week .

, swimming pools, hotels and spaces for sporting or cultural events - such as theaters - is allowed but only citizens who have already received two doses of the vaccine or are cured and who can therefore show the 'Green Pass' will be able to access them.

This is a digital document valid for six months that identifies their data with a QR Code. To obtain it, you need to download an app that was launched this week by the Ministry of Health.

During the day, the app went haywire.

Prime Minister Benjamin Netanyahu said it will be possible to download the "green sticker" in the coming days, after the initial flop of the service.

The online system, in fact, 'crashed' a few hours before the scheduled activation, prompting the Ministry of Health to invite citizens to use the certificate of vaccination instead.

"There has been an overload," he said, "but tens of thousands of people have already had their Green Pass."

lifting of the restrictions

is part of the second phase of the easing that Israel initiated on February 7, following a new six-week nationwide lockdown.

The third phase should start on 7 March, when bars or restaurants are expected to reopen and all students will return to school.

Israel has so far implemented the best and fastest vaccination campaign in the world: over 49% of the population has received at least one dose of Pfizer vaccine and nearly 2.9 million inhabitants have already received the second.

The infection rate has dropped in recent weeks and, according to data from the past few hours, deaths related to the Coronavirus have dropped by 98.9% among those who received the second dose of the vaccine.

The government's goal is to immunize the majority of the population at the end of March, when general elections will be held in the country.

Since the beginning of the pandemic, Israel (9.2 million inhabitants) has recorded almost 750,000 infections and 5,526 deaths.