In November 2020, the 30th China News Awards was announced. The text message "Xi Jinping: I will live up to the people" published on the official WeChat account of People's Daily Online won the first prize. This brief message is innovative in writing style and sees the general trend in the "micro" space. Through the eight words "I will have no self, I will live up to the people", so that hundred 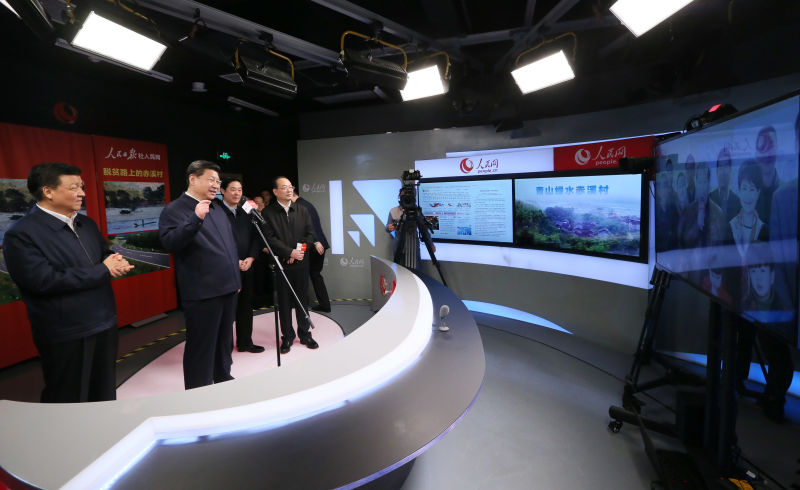 In November 2020, the 30th China News Awards was announced. The text message "Xi Jinping: I will live up to the people" published on the official WeChat account of People's Daily Online won the first prize.

This brief message is innovative in writing style and sees the general trend in the "micro" space. Through the eight words "I will have no self, I will live up to the people", so that hundreds of millions of people can feel the people's leader's feelings for the people. The text is short and meaningful. .

This is a vivid practice of the party’s journalists in practicing the spirit of Xi Jinping’s important speech on February 19.

"To change the style of writing, lean down, sink your heart, observe the facts, tell the truth, move the truth, and strive to produce thoughtful, warm, and high-quality works." For the past five years, journalists have kept in mind the entrustment of General Secretary Xi Jinping and stick to their original intentions. And mission, without a whip, write a magnificent chapter in the new era.

He pointed out that the People's Liberation Army Daily, which was first published on January 1, 1956, is an organ newspaper of the Central Military Commission, the party's mouthpiece in the army, an important position for our party and our army's propaganda and ideological work, and a characteristic of the party's leadership of the people's army.

On February 19, 2016, during the investigation of People's Daily, Xi Jinping used People's Daily to connect with villagers in Chixi Village, Fujian.

In his speech, he emphasized that it is necessary to adapt to the development of the domestic and foreign situation, grasp the position from the overall work of the party, adhere to the party's leadership, adhere to the correct political direction, adhere to the people-centered work orientation, respect the law of news dissemination, and innovate methods and methods. Effectively improve the party's news and public opinion dissemination, guidance, influence, and credibility.

On January 25, 2019, the Political Bureau of the CPC Central Committee held the twelfth collective study on the omnimedia era and the development of media integration in the People's Daily.

Xi Jinping, General Secretary of the CPC Central Committee, presided over the study and delivered an important speech.

On January 25, 2019, the Political Bureau of the Central Committee of the Communist Party of China held the twelfth collective study on the omnimedia era and the development of media integration at the People's Daily. Xi Jinping once again walked into the People's Daily to preside over the study and deliver an important speech.

He emphasized that the People's Daily is an organ newspaper of the Party Central Committee.

The People's Daily should be better run, expand geographical coverage, expand population coverage, and expand content coverage, and give full play to its guiding role, banner role, and leading role in public opinion.

Xi Jinping has always insisted on putting news and public opinion work in the overall situation of the party and the country to understand and grasp.

Over the past five years, the majority of journalists have kept their responsibilities and missions in mind, have always maintained a high degree of consistency with the Party Central Committee, faced the questions of the times, effectively responded to concerns, correctly guided public opinion, and served the overall situation of development.

From an in-depth interpretation of the policies and guidelines of the Party and the state, to continuous implementation of the new normal of economic development, deepening of supply-side structural reforms, and promotion of high-quality economic development, and other important themes, to poverty alleviation, fighting the epidemic, and social governance. Work reports, the party’s news and public opinion work plays the role of "timing drum", "weather vane" and "ballast stone", and has undertaken the important mission of gathering people's hearts, inspiring and leading the people of the country to unite and move forward.

At present, omni-media continues to develop, with the emergence of full-process media, holographic media, all-employee media, and full-effect media, and profound changes have taken place in the ecology of public opinion, media patterns, and communication methods.

In the omnimedia era where "everyone has a microphone", how to improve the level of public opinion guidance is a major issue in the work of news and public opinion.

The "Decision" of the Fourth Plenary Session of the Nineteenth Central Committee of the Communist Party of China put forward "improving the working mechanism for adhering to the correct orientation of public opinion guidance" and made a series of important arrangements.

Facing the new situation, new tasks and new challenges, the majority of news and public opinion workers adhere to the principle of party spirit, actively convey the voice of the party, and strive to build a mainstream public opinion pattern that integrates online and offline, internal and external propaganda, and provides a powerful force for the development of the party and the country. Public opinion support.

"Only when we stand on the ground in the hardest-hit area of ​​the new crown pneumonia epidemic, and when we stand among the people in Wuhan, will our news editors and reporters have deeper roots, and our hearts will be more true. Only then will we go wider and further.” This is the voice of reporters who are on the front line of fighting the new crown pneumonia epidemic.

On February 3, 2020, Xi Jinping chaired a meeting of the Standing Committee of the Political Bureau of the CPC Central Committee to study and strengthen the prevention and control of pneumonia caused by the new coronavirus.

At the same time, more than 300 reporters have gone deep into Hubei and Wuhan to conduct interviews and reports under unified command.

"The ocean is traversing, and the hero is true." In the grim struggle against the epidemic, the majority of journalists did not fear difficulties and dangers, went deep into the front line, in-depth propaganda of the Party Central Committee's decision-making and deployment, and fully reported the effectiveness of the joint prevention and control measures of various regions and departments. Telling the moving stories of the front line of epidemic prevention and fighting, has made a significant contribution to epidemic prevention and control.

On October 15, 2020, under the guidance of the Central Propaganda Department and hosted by the Hubei Provincial Party Committee and the Provincial Government, the opening ceremony of the "People First and Life First" special exhibition on fighting the new crown pneumonia epidemic was held in Wuhan, Hubei.

Five huge posters designed by People's Daily Online appeared at the entrance of the exhibition hall.

The past year has not only been thrilling to fight the epidemic, but also journalists have never been absent in publicity reports on flood relief and poverty alleviation.

"We must carry out in-depth education of Marxist news views, and guide the masses of news and public opinion workers to be the communicators of the party's policies and opinions, recorders of the times, promoters of social progress, and watchers of fairness and justice." What journalists should play Social role?

Xi Jinping gave a clear direction for this.

"Finding the right coordinate positioning around the center and serving the overall situation, keeping in mind social responsibility, and constantly solving the fundamental problem of'for whom, relying on, and who I am'", in the important speech on "2·19", Xi Jinping not only pointed out clearly The responsibilities and missions of the party's news and public opinion work have also provided a fundamental basis for news and public opinion workers to find the correct position.

"In a word, it is to be a journalist trusted by the party and the people."

On November 8, 2017, Xi Jinping sent a letter to congratulate the 80th anniversary of the establishment of the All-China Association of Journalists.

He emphasized that he hopes that the majority of journalists will strengthen the "four self-confidence", maintain the feelings of the people, record the great era, tell the Chinese story well, spread the voice of China, sing the triumphant song of forge ahead, and gather national strength to achieve the "two centuries" Striving for goals and realizing the Chinese dream of the great rejuvenation of the Chinese nation continue to make new and greater contributions.

Focus on integration, development and innovation to activate kinetic energy

Visitors stop and linger on pictures and videos, and appreciate from the vivid stories how the "anti-epidemic fighters" do not care about life and death, fearlessly retrograde, and how the "disaster relief pioneers" step forward without hesitation... The exhibition vividly interprets "the ordinary casts" "Great, heroes come from the people" profound meaning.

This is an attempt by People's Daily Online to integrate online and offline in thematic promotion.

"With the development of the situation, the party's news and public opinion work must innovate in concepts, content, genres, forms, methods, means, formats, systems, and mechanisms, and enhance its pertinence and effectiveness." Faced with the rapid development of Internet technology, the mainstream media belt In the new challenges that come, Xi Jinping pointed out the way forward for the media in his important speech on February 19th.

In the past five years, media integration has advanced in depth, and mainstream media creativity has burst.

On January 25, 2019, the Political Bureau of the CPC Central Committee held the twelfth collective study on the omnimedia era and the development of media integration in the People's Daily.

This is in front of the mobile reporting command platform. Xi Jinping, General Secretary of the CPC Central Committee, was interviewing reporters in Yuying Village, Pingfang Manchu Township, Luanping County, Chengde City, Hebei Province, and the first secretary of the poverty alleviation village to communicate to understand the village’s poverty alleviation work The progress.

"To promote integrated development, take the initiative to use the advantages of new media communication." Media integration development is not only a media transformation brought about by the technological revolution, but also the only way for traditional mainstream media, but also a profound development that affects the overall situation and affects various fields. change.

Nowadays, People's Daily is not only a newspaper, but an all-media "Phalanx of People's Media" covering more than 10 media including newspapers, periodicals, internet, terminal, micro and screen.

Xinhua News Agency promotes the transformation of news gathering and editing from the "two wings" of text and pictures to the "trinity" of text, pictures, audio and video, from single, single-dimensional, one-way, to omni-media, multi-dimensional, and interactive.

Over the past five years, more and more media reporters have developed across borders and become "all-media talents" who "can write with pens, speak with mirrors, and film with functions".

They pinpointed their coordinates, kept their social responsibilities in mind, and launched batch after batch of thoughtful, warm, and high-quality works.

Looking back over the past five years, the majority of journalists have always adhered to integrity and innovation, with the people in their hearts and dirt under their feet, and they are courageously moving forward under the inspiration of the mission of raising the banner, gathering people's hearts, cultivating new people, invigorating culture, and developing image.