Chinese netizens approaching 1 billion, what does it mean? 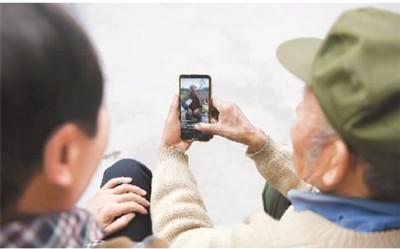 Chinese netizens approaching 1 billion, what does it mean?

Under the epidemic situation, many Internet platforms and applications have provided people "Chinese New Year on the spot" with a new way to celebrate the Spring Festival.

The relationship between the Internet and the Chinese is getting closer.

At the same time, China's Internet penetration rate has reached 70.4%, which is higher than the global average.

What does the upcoming 1 billion Internet users mean?

The report shows that as of December 2020, the number of Internet users in my country has reached 989 million, an increase of 85.4 million from March 2020.

Among them, the number of mobile Internet users reached 986 million, an increase of 88.85 million over March 2020.

In the longer term, during the five years of the 13th Five-Year Plan period, thanks to the comprehensive advancement of Internet infrastructure construction, the scale of Chinese Internet users has achieved steady and rapid growth.

From December 2015 to December 2020, the number of Chinese Internet users increased by 301 million.

With the continuous improvement of Internet popularization and application level, more people can enjoy the convenience brought by the Internet, and the world's largest group of netizens has gradually formed.

Zhang Xiao, deputy director of CNNIC, said that the demographic dividend of Chinese netizens presents the characteristics of "plate drift" from "from city to countryside" and "from east to west".

On the one hand, the digital divide between urban and rural areas has further narrowed.

In recent years, China has continued to deepen its digital rural strategy, and the scale of rural netizens and Internet penetration have increased significantly.

On the other hand, netizens in the central and western regions have grown rapidly. The size of Internet users increased by 40% compared with 2016, and the growth rate was 12.4 percentage points higher than that in the eastern region.

The report pointed out that the in-depth development of online poverty alleviation in recent years has promoted the accelerated conversion of non-netizens in remote and poor areas.

In addition to opening up the "last mile" of communication in poverty-stricken areas, the coverage of e-commerce, online education, telemedicine, and basic financial services have enhanced the blood-forming function of poverty-stricken areas and stimulated the endogenous motivation of the poor for self-development.

Regarding the age composition of netizens, the “post-00s” and “silver-haired people” from one end to the other constitute the diversified “digital groups” of the Internet age. The main body of netizens growth is transforming from youth groups to underage and elderly groups.

Among the new netizens, the proportion of netizens under 20 and over 60 has also increased significantly.

As the first generation of Internet "indigenous people", it goes without saying that the scale of "post-00" netizens has expanded.

The growth of the elderly netizen population is attributable to the "aging" trend of Internet applications.

In 2020, the General Office of the State Council issued the "Implementation Plan on Effectively Solving the Difficulties of the Elderly in the Use of Intelligent Technology", which is a solid step towards making it easier for the elderly to enjoy intelligent services.

Today, innovative applications of the Internet are gradually changing the lives of the elderly, allowing "silver netizens" to also enjoy the convenience of the "Smart Era".

The full launch of the new infrastructure has successfully boosted the development of the Internet industry and the prosperity of the digital economy.

Liu Jiuru, editor-in-chief of the Electronic Industry Press and Dean of the Huaxin Research Institute, believes that during the "13th Five-Year Plan" period, my country's new infrastructure has accelerated, laying a solid foundation for the rapid development of the Internet industry and the wider application of new generation information technology.

The report shows that as of December 2020, China has built 718,000 5G base stations, promoted the joint construction and sharing of 330,000 5G base stations, more than 180 million connected terminals, and built the world’s largest 5G network; cultivated more than 100 with certain industries , Regionally influential industrial Internet platform, connecting 40 million units (sets) of industrial equipment, with an industrial scale of 3 trillion yuan; accelerating the construction of aerospace network facilities, and fully completing the Beidou-3 global satellite navigation system constellation deployment six months in advance, based on Beidou The navigation service is widely used in e-commerce, mobile smart terminal manufacturing, location services and other fields.

In 2020, China will continue to make breakthroughs in cutting-edge technologies such as quantum technology, blockchain, and artificial intelligence, with fruitful application results and release the momentum of industrial development.

The report pointed out that as quantum technology has become the focus of information and communication technology evolution and industrial upgrading, China has made significant progress in policy layout, technological development and industrial application; in the field of blockchain, 40 blocks have been built nationwide in 2020 In the chain industry park, there are 64,996 blockchain-related companies. The market size of the blockchain industry in the first half of 2020 is 1.715 billion yuan, a year-on-year increase of 246.5%; in the field of big data, the scale of China's big data industry will exceed one trillion yuan in 2020. Reached 1,010 billion yuan, a year-on-year increase of 26.3%; in the field of artificial intelligence, a new generation of artificial intelligence technology is accelerating the deep integration and application of various industries, promoting the accelerated leap from digitization and networking to intelligence in various economic and social fields.

Xie Gaogang, deputy director of the Chinese Academy of Sciences Network Center and professor of the University of Chinese Academy of Sciences, said that the continuous development of Internet-related industries and applications has put forward higher requirements for the safe and stable operation of Internet infrastructure, and innovation and breakthroughs in Internet architecture and basic resource technologies.

From competing for "Spring Festival Gala Marketing", to launching a "red envelope war", to leveraging "traffic business"...This Spring Festival holiday, short video platforms are undoubtedly the protagonists of the Internet.

The report shows that as of December 2020, the number of online video (including short videos) users in my country has reached 927 million, an increase of 76.33 million from March 2020, accounting for 93.7% of the total Internet users.

Among them, the number of short video users is 873 million, an increase of 100 million from March 2020, accounting for 88.3% of the total netizens.

Why did the users of short video "explode" in less than a year?

The report believes that, on the one hand, major short video platforms have increased their layout in the payment field, forming a closed loop of their own e-commerce transactions.

Based on the payment business, the platform can accumulate a large amount of user data and carry out targeted product push and marketing.

On the other hand, short video platforms represented by Douyin and Kuaishou actively expanded overseas markets and achieved good results by virtue of their first-mover advantages.

It is worth noting that the rise of short video may drive the development of multi-industry linkage.

Industry insiders pointed out that with the help of large traffic channels, industries such as advertising, e-commerce, and games are expected to share the development dividends of the short video industry.

CNNIC Director Zeng Yu said that during the "13th Five-Year Plan" period, my country's digital economy is thriving, and Internet applications are blooming, providing strong support for my country to build a new development pattern with the domestic cycle as the main body and the domestic and international dual cycles.

The report pointed out that in terms of online retail, my country has become the world's largest online retail market for eight consecutive years since 2013.

As of December 2020, the number of online shopping users in my country has reached 782 million, an increase of 72.15 million over March 2020, accounting for 79.1% of the total Internet users.

While online retail continues to grow, online payment is also continuing to spread.

The report shows that as of December 2020, the number of online payment users in my country has reached 854 million, an increase of 86.36 million from March 2020, accounting for 86.4% of the total Internet users.

During the epidemic, the national integrated government service platform launched the "Epidemic Prevention Health Code", which has applied for nearly 900 million people and used more than 40 billion people, supporting most areas of the country to achieve "one-yard access". Big data is used in epidemic prevention and control And the role of resumption of work and production is prominent.

Among them, new models such as remote office and online education effectively meet the practical needs of netizens for work and study, and provide powerful assistance for the "restart" of the entire society and economic recovery.

The report shows that as of December 2020, the number of users of remote office applications in China has reached 346 million, an increase of 147 million compared to June 2020; major online education platforms have launched various free live courses for student groups to facilitate students’ home learning and the scale of users Rapid growth; Affected by the epidemic, netizens’ demand for online medical treatment continues to increase, which further promotes the digital transformation of China’s medical industry... As of December 2020, the number of online education and online medical users in China is 342 million and 215 million, respectively, accounting for 34.6% and 21.7% of netizens as a whole.

"The urgent need to fight the new crown pneumonia epidemic has further accelerated the construction of digital government." Wang Yimin, director of the e-government research center of the Party School of the Communist Party of China (National School of Administration) and deputy director of the National E-government Expert Committee, said that my country has given full play to the national integrated services Effective system construction, vigorously promote the construction of digital government, and provide service support for the solid “six stability” work and the full implementation of the “six guarantees” task.

According to the "2020 UN E-Government Survey Report", China's E-Government Development Index ranking has risen from 65th in 2018 to 45th, reaching a "very high" level.

Among them, the online service index, which is a core indicator for measuring the level of e-government development, jumped from 34th to 9th in the world, becoming a global leader.