State Councilor and Foreign Minister Wang Yi attended the UN Security Council Ministerial Public Meeting on New Crown Vaccines in Beijing on February 17, 2021, and delivered a speech entitled "People-centered Strengthening of Global Anti-epidemic Cooperation".   Wang Yi said that in the past seven months since the Security Council passed Resolution 2532 calling for a global ceasefire and stren 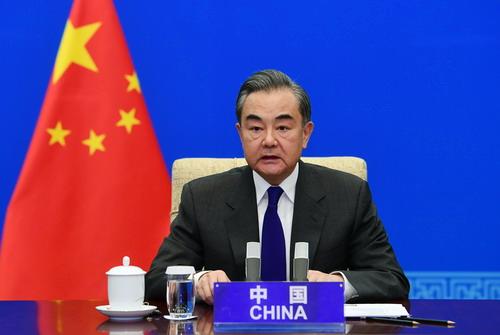 Wang Yi said that in the past seven months since the Security Council passed Resolution 2532 calling for a global ceasefire and strengthening unity to fight the epidemic, more than 180 countries have approved the global ceasefire initiative, and the situation in Libya, Sudan and other countries has made significant progress, contributing to the international fight against the epidemic. The struggle provided an aid.

At the same time, a new round of the epidemic is still spreading, and the vast majority of developing countries, especially countries caught in conflict and those affected by humanitarian crises, are facing difficult situations.

We must redouble our efforts to make new contributions to fighting the epidemic and maintaining peace.

Wang Yi put forward four points in this regard:

First, uphold the people's supremacy and strengthen international cooperation in the fight against the epidemic.

This is a relay race to save lives together, not a zero-sum game where you win and I lose.

All countries should replace division with unity, firmly follow the right path of cooperating to fight the epidemic and overcome difficulties together; replace prejudice with science, and combat all kinds of false information and attempts to politicize the epidemic.

The members of the Council must set an example in this regard.

Second, fully implement Security Council resolutions and create an environment conducive to the fight against the epidemic.

All parties to the conflict must earnestly abide by Security Council Resolution 2532, stay away from the battlefield of killing each other, and invest in the battle against the epidemic.

To ensure humanitarian access, give priority to helping vulnerable groups such as women and children.

The United Nations should make good use of the ceasefire window, actively mediate and promote the political settlement process.

China has always opposed unilateral sanctions that are not authorized by the Security Council and urges relevant countries to demonstrate humanitarianism and at least suspend unilateral coercive measures that are not based on international law.

The new crown vaccine is being developed and produced at a record speed, but there are also problems that need to be resolved: first, the "capacity deficit."

For vaccines that have been used urgently and are on the market conditionally, countries should not only rely on their own strength to increase the supply, but also actively carry out international cooperation such as commissioned production and joint production.

The second is "distribution deficit."

Vaccines are entering high-income countries quickly and in large numbers, while poor countries have little access. This will not only lead to the "immunization gap" but also aggravate the "development gap."

All parties should work together to resist vaccine "nationalism" and promote fair and reasonable distribution of vaccines, especially to achieve accessibility and affordability in developing countries, including conflict countries, so as not to let a country in need be left behind or let any The people waiting for the vaccine are forgotten.

Fourth, strengthen overall coordination and give full play to the role of the United Nations system.

The "New Crown Vaccine Implementation Plan" should fully embody the principle of giving priority to developing countries and ensure the supply of conflict areas and sanctioned countries.

The World Food Program, UNICEF, etc. should build a green channel for the distribution of vaccines to developing countries, especially the "last mile" in Africa.

Wang Yi said that President Xi Jinping solemnly declared to the world that China's vaccines will be a global public product and make China's contribution to the realization of the availability and affordability of vaccines in developing countries.

The Chinese dialect is imperative, and is the first to join the WHO "Global Cooperation to Accelerate the Development, Production, and Fair Access to New Tools for Prevention and Control of New Coronary Pneumonia" initiative, actively develop vaccine research and development cooperation with more than 10 countries, and join and support the "New Coronary Vaccine Implementation Plan" , To promote the fair distribution of vaccines with practical actions.

At the request of WHO, China decided to provide 10 million doses of domestic vaccine to the "implementation plan" to meet the urgent needs of developing countries.

China has provided vaccine assistance to 53 developing countries that have requested it, and has exported vaccines to 22 countries.

China actively leverages its advantages in the industrial chain to support and assist other countries in processing and producing vaccine products in China or locally to help increase global production capacity.

China has decided to join the Friends of the New Crown Vaccine Group for peacekeepers and donate vaccines to UN peacekeepers.

Wang Yi emphasized that China has never pursued any geopolitical goals in its international cooperation on the new crown vaccine, never calculated any economic benefits, and never attached any political conditions.

What we think about the most is to make vaccines a public product that people in all countries can use and can afford, and truly become a "people's vaccine."

China will continue to work with all parties to strengthen cooperation in vaccines, prevention and control and other fields, promote the construction of a human health community, and win the final victory in the global fight against the epidemic.

The theme of the meeting was "Ensuring Fair Access to the New Coronavirus Vaccine in the Context of Conflict and Insecurity". It was hosted by the United Kingdom, the rotating presidency of the United Nations Security Council in February. Council members and UN Secretary-General Guterres attended the meeting.