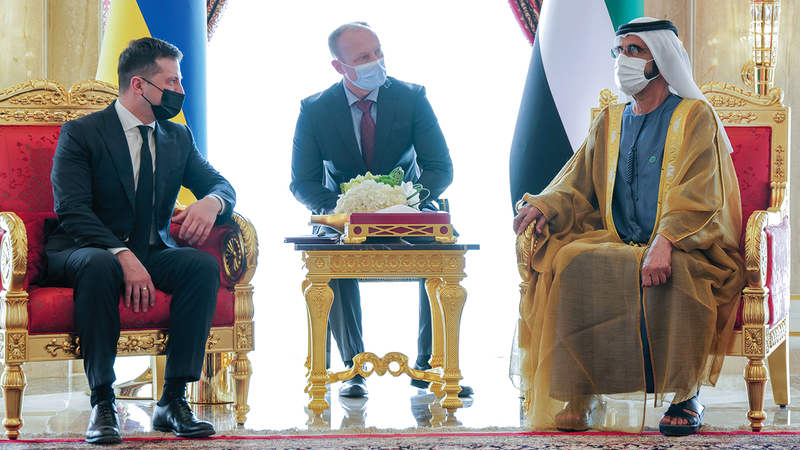 His Highness Sheikh Mohammed bin Rashid Al Maktoum, Vice President, Prime Minister and Ruler of Dubai, received at His Highness’s palace in Zabeel yesterday, President of the Republic of Ukraine Vladimir Zelensky, accompanied by a high ministerial and government delegation.

His Highness welcomed the attendance of His Highness Sheikh Hamdan bin Mohammed bin Rashid Al Maktoum, Crown Prince of Dubai, and His Highness Sheikh Maktoum bin Mohammed bin Rashid Al Maktoum, Deputy Ruler of Dubai, the guest president on his first visit to the country, hoping that His Highness would be a good beginning for further cooperation and exchange of experiences between the two countries. In the various sectors of tourism, economy, infrastructure, food security, and other areas that benefit the peoples of the two friendly countries.

His Highness Sheikh Mohammed bin Rashid Al Maktoum said through a tweet on “Twitter”: “During the reception of Ukrainian President Vladimir Zelensky in Dubai on his first visit to the Middle East .. We have agreements on mutual exemption from visas, and we have a trade exchange of one billion dollars and it is growing rapidly, and we have 200 A major Ukrainian company operating in Dubai, and we have good and sincere intentions to develop positive and lasting relationships with them.

During the review of His Highness Sheikh Mohammed bin Rashid Al Maktoum and President Vladimir Zelensky of the agreements and memoranda of understanding signed between the UAE and the Republic of Ukraine, His Highness congratulated the guest president on these agreements that will contribute to the development of bilateral relations between the two sides, and encourage the doubling of investment partnership, especially for the private sector. .

During the meeting between His Highness and the Ukrainian President, in the presence of the two countries' delegations, these agreements and memoranda of understanding included combating crime and terrorism, the amendment of the agreement to avoid double taxation, the mutual recognition of a driving license, and understanding in the field of land relations, as well as in the fields of tourism and food security.

His Highness Sheikh Mohammed bin Rashid Al Maktoum stressed the importance of these agreements in organizing bilateral relations between the two countries, developing joint perceptions and a plan to move in the path of developing cooperation and coordination and building a bilateral investment partnership based on mutual benefit that preserves the rights and supreme national interests of both parties.

For his part, the Ukrainian President expressed his desire and his country's government to revitalize tourism between the two sides and increase the volume of Emirati investments in this sector and other sectors with valuable economic feasibility that the two friendly countries and peoples can reap the fruits of, and achieve the cultural, humanitarian, commercial and security rapprochement that Ukraine looks forward to in continuous consultation with the UAE Leadership and government.

Praising the blessed renaissance in the UAE and its hosting of the world's largest event, Expo Dubai 2020, and participating in a large pavilion in the exhibition, he considered that it is a great opportunity to promote Ukraine and the investment potential it is proud of in various sectors, especially industrial and tourism.

- The Ukrainian president expressed his desire to revitalize tourism between the two sides and increase Emirati investments.