"The question fell out of the current agenda": will Kiev change its policy towards national minorities at the call of the EU

The European Union expects that the Ukrainian authorities will adopt a law on the rights of national minorities and begin a constructive dialogue with them. This was stated by the European Commissioner for Enlargement and Neighborhood Policy Oliver Varheyi. Earlier, Kiev promised to adopt such a document, but since then the situation of national minorities has only worsened, and as a result, the country has not yet met the EU requirements. According to experts, the Ukrainian leadership will continue to verbally agree with its European partners, but is unlikely to follow their calls and change national and language policies. 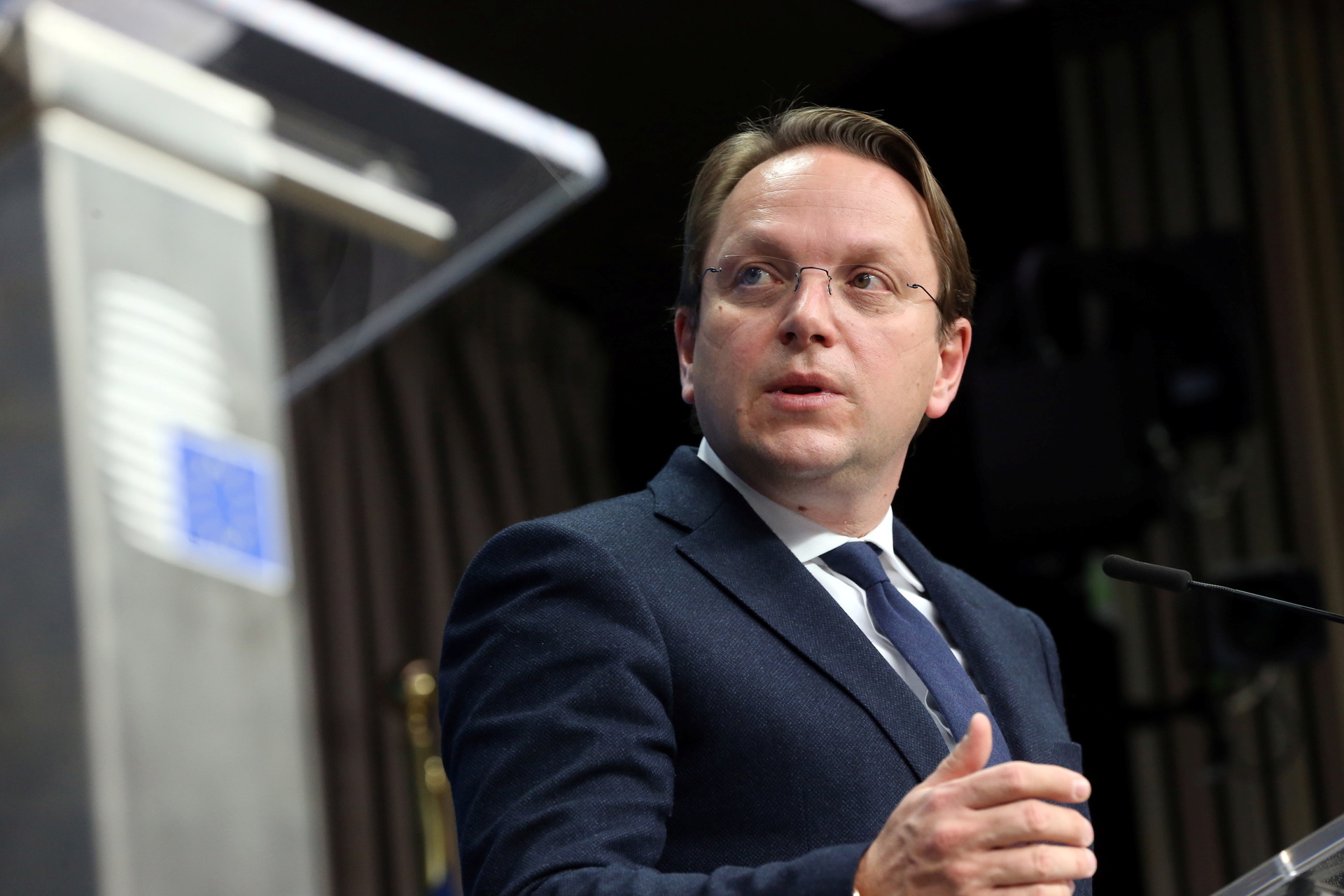 The European Union expects that the Ukrainian authorities will deal with the problems of national minorities in connection with the threats that their representatives receive.

This was stated by the European Commissioner for Enlargement and Neighborhood Policy (representative of Hungary) Oliver Varheyi following the results of the seventh meeting of the EU-Ukraine Association Council in Brussels.

The European Commissioner explained that the issue of the rights of national minorities worries him very much.

“At the meeting, I confirmed the need for Ukraine to ensure the observance of their (national minorities. -

) rights and start a constructive dialogue with their representatives.

This also applies to the law "On National Minorities", which is under preparation, and we expect that this law will resolve all unresolved issues of the previous legislation on the state language and education, "he said.

Oliver Varheyi also announced that he had received confirmation from the Ukrainian Prime Minister that the Ukrainian side is committed to protecting national minorities.

The joint press release following the meeting of the Council also mentions the problem of observing the rights of national minorities in Ukraine.

Earlier it became known that the Council of Europe intends to attract consultants to work in the framework of the project on the protection of national minorities in Ukraine.

This was mentioned in the description of the tender, which RT got acquainted with.

The document emphasizes the need to draw attention to Roma issues.

The Council of Europe plans to find up to 30 specialists for this.

They will help to increase the participation of national minorities in decision-making at the local level.

In addition, consultants should continue to develop a teaching strategy in Romani.

For these purposes, the CE is ready to allocate up to € 55 thousand.

“The second phase of the project is aimed at strengthening the overall legislative and institutional framework for the protection of national minorities, including Roma, as well as minority languages, while strengthening the capacity and opportunities for effective participation of members of national minorities and civil society in decision-making,” the text specifies.

Note that in mid-December 2020, in connection with searches in Hungarian organizations in Ukraine, MEPs from Hungary and Romania addressed the EU High Representative for Foreign Affairs and Security Policy Josep Borrell with the question of when the EU would take measures and stop hushing up cases that threaten the existence national minorities in this country.

The deputies called the actions of the Ukrainian authorities against ethnic Hungarians "unprecedented."

The request, which RT got acquainted with, referred to the events of November 30, when the SBU conducted searches in the apartment of the chairman of the Hungarian Cultural Association of Transcarpathia (KMKSZ), a former deputy of the Verkhovna Rada, Vasily Brenzovich.

In addition, the Ukrainian special service searched the offices of the Party of Hungarians of Ukraine headed by Brenzovich and charitable foundations.

MEPs recalled that the searches took place immediately after the representatives of KMKSZ spoke out against the new Ukrainian norms on language and education - the association believes that these laws will have negative consequences for the country's minorities.

From the point of view of the EP deputies, the SBU relied in its actions on "fabricated political accusations."

As noted in the request, since 2017, the Ukrainian leadership has systematically violated the rights of national minorities.

We will remind, attempts to curtail the rights of national minorities began in Ukraine immediately after the coup.

On February 22, 2014, the Rada removed President Viktor Yanukovych from power, and the very next day the parliament voted to repeal the law "On the Foundations of State Language Policy".

The document was in force since 2012 and made it possible to endow the languages ​​of national minorities with the status of regional languages.

An attempt to abolish this rule provoked protests in the east of the country.

As a result, Alexander Turchinov, the acting president, refused to support the Rada's decision.

However, in 2018, the Constitutional Court of Ukraine found this law to be contrary to the basic law.

In parallel, the new authorities began a course to oust the languages ​​of national minorities from the education system.

In 2017, Petro Poroshenko (then the president of Ukraine) signed the law "On Education", which provided for the transfer of education in schools and universities of the country into Ukrainian by 2020.

The law affected the interests of not only the Russian-speaking population, but also other national minorities, including ethnic Hungarians.

In response to this step by Kiev, Budapest blocked the work of the Ukraine-NATO commission.

Interaction on this issue has not yet been renewed.

The law on education also caused a reaction at the EU level - Brussels recommended Kiev to extend the transition period until the final entry into force of the law until 2023.

In addition, the EU called on the Ukrainian authorities to exclude private schools from the law.

However, the only concession from Kiev was the extension of the transition period until 2023 for teaching in the languages ​​of national minorities belonging to the official languages ​​of the EU.

This gesture of the Ukrainian side did not satisfy Budapest.

In early 2020, Hungarian Foreign Minister Peter Siyjarto said that the Hungarian side wants Hungarians living in Transcarpathia to be able to preserve their native language.

In turn, the Ukrainian Foreign Ministry said that Ukraine will not amend the law on education at the request of Hungary.

Meanwhile, the languages ​​of national minorities are being squeezed out not only from education, but also from other spheres.

Back in May 2019, at the end of his presidential term, Petro Poroshenko signed the law "On ensuring the functioning of the Ukrainian language as a state language."

According to the document, only the Ukrainian language can be used in the public sphere, including culture and education.

Volodymyr Zelenskyy, who took over as head of state, continued the language policy of his predecessor.

In autumn 2019, a delegation from the European Commission for Democracy through Law of the Council of Europe (Venice Commission) visited Ukraine.

The commission's experts studied the procedure for introducing new language norms in the country.

Following the visit, the Venice Commission pointed out to Kiev that it is necessary to strive for a balance in language policy so that this issue does not become a source of interethnic tension.

The commission called on Kiev to prepare and adopt a new law "On National Minorities", which would expand their opportunities to use their native languages.

At the same time, in January 2021, Article 30 of the law "On ensuring the functioning of the Ukrainian language as the state language" came into force in Ukraine, which prescribes to use exclusively the state language now in the service sector.

According to experts, now the country has a law with the same name, which was adopted in the early 1990s.

Ruslan Bortnik, director of the Ukrainian Institute for Analysis and Policy Management, told RT in a commentary on this.

“The law on state language signed by Petro Poroshenko says about the need to adopt a special rule on the protection of the languages ​​of national minorities.

Promises to do this have been repeatedly voiced, but so far the law has not been adopted.

And then this issue completely dropped out of the current agenda, and now there is no room left for the use of the languages ​​of national minorities in Ukraine, ”the expert added.

A similar opinion was expressed in an interview with RT by the president of the Ukrainian Analytical Center, Alexander Okhrimenko.

The expert explained that the current law on national minorities does not contain any specifics, only declarations.

“Therefore, a new law on national minorities is really needed.

However, this requirement of the EU is unlikely to be met, because Zelensky is moving in the same course as Petro Poroshenko.

Kiev is simply sabotaging the demands of its partners.

And if the law is adopted, they will certainly do so so that it does not apply to the Russian-speaking population for political reasons, ”the expert said.

At the same time, Kiev does not stop making promises to European partners.

So, in early 2020, the Deputy Prime Minister for European and Euro-Atlantic Integration of Ukraine (then this post was held by Dmitry Kuleba) said that the Ministry of Culture, Youth and Sports was allegedly busy developing a bill on national minorities.

“I cannot say right now when he will be in parliament, but I assure you that Ukraine will not drag out this process,” Kuleba said at a joint briefing with Hungarian Minister of Foreign Affairs and Foreign Trade Peter Siyjarto in Kiev.

But after a year, the fate of the initiative is still unclear.

According to Ruslan Bortnik, Europe is demanding such a step from Kiev in the hope that the new law will at least slightly balance the language policy.

“But in practice this is impossible, since the laws passed in recent years have left no niches for the languages ​​of national minorities.

At the same time, one should not take the EU's discontent seriously.

The calls of the European Commissioners, MEPs are traditional democratic rhetoric, but they are not backed up by real mechanisms of influence.

Therefore, Ukraine will continue to ignore these calls, ”the expert is sure.

Alexander Okhrimenko adheres to a similar point of view.

According to the analyst, the European Union will simply close its eyes to Kiev's inaction.

“Language laws are not the only norms that have been adopted in Ukraine in recent years, contrary to the European charters and the position of the Venice Commission.

The law on lustration can be cited as such an example.

Kiev does not even think to revise such novels, nor will it adjust its language policy.

In fact, the Ukrainian authorities make concessions to the EU only in exchange for some bonuses, for example, loans.

But language policy and the rights of national minorities are not among the issues that promise benefits, ”the expert concluded.