The tag # Probe_Hope_Pride_Pride_Twitter was issued, hours after the announcement of the successful arrival of the Emirati probe into its orbit in the Red Planet. Followers said that this morning was different from the others, especially after the achievement of the great Emirati achievement in reaching 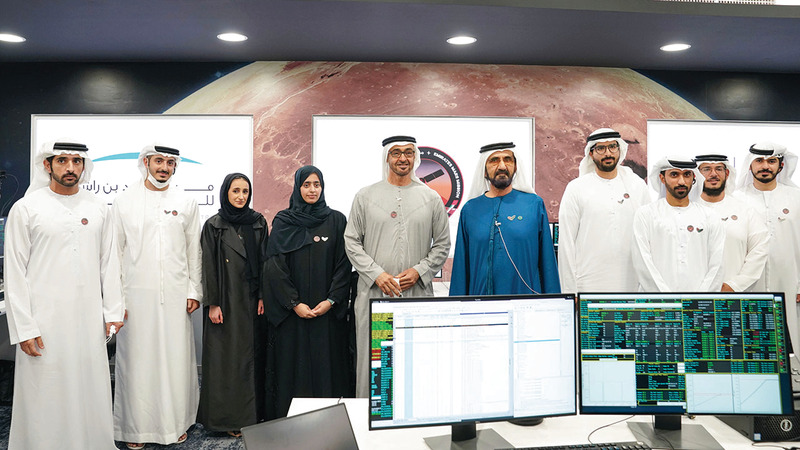 The hashtag #The Hope_Pride_Pride_Twitter was issued, hours after the announcement that the Emirati probe had successfully reached its orbit in the Red Planet.

Followers said that this morning was a different morning from others, especially after achieving the great Emirati achievement in reaching Mars, which history will immortalize in its pages.

Tweeters expressed their feelings towards this achievement, which is filled with pride and pride in the UAE for its successive achievements, noting that this morning was for them the morning of accomplishments, and one of the tweeters said: “Good morning ... a new day ... renewed hope ... ambitions that glow. Goals will be achieved, God Almighty willing ... Mars morning from the state of no impossible. "

Another said: "The morning of achievements and pride, O most precious nation. The probe is the fulfillment of Zayed's dream. The probe is to reach the summit of science and research. The probe is a pride recorded in history and remains for a long time. The UAE spent money and taught generations and created shops in order to raise it and shared the good of Arabs and Muslims ".

Tweeters described this morning as “the morning of ambition,” noting that the successive achievements of the UAE make the aspirations of its people and residents unlimited. One of them said: “Our ambition is great, and our aspirations have no limits ... When dreams turn into reality, then we know for sure that our ship is sailing towards The future, with steadfast steps and steadfast determination, is the UAE from victory to victory over the probe vehicle until we reach Mars. "

Tweeters also transmitted a verse of the Arab poet Abu Al-Tayyeb Al-Mutanabi, who says: "If you ventured into a fine honor, do not be content with what is below the stars."

For their part, the tweeters described His Highness Sheikh Mohammed bin Rashid Al Maktoum, Vice President and Prime Minister of the UAE and Ruler of Dubai, and His Highness Sheikh Mohammed bin Zayed Al Nahyan, Crown Prince of Abu Dhabi and Deputy Supreme Commander of the Armed Forces, as "dream makers", for their wise directives and efforts that It creates hope in the heart of every Arab, and makes the UAE the country of the impossible. One of them said: “All thanks to the makers of hope, love, peace and determination in the heart of every Arab .. Sheikh # Muhammad Bin Zayed and Sheikh # Muhammad_ Bin_Rashid.”

In this context, tweeters from various Arab countries participated in this tag, congratulating the UAE government and people for this achievement, and one of them said: “We congratulate the loved ones and brothers in the UAE for this pride.”

Another said: "Congratulations to our people in the Emirates for the success of the Hope Probe reaching Mars."

Yesterday evening, the UAE entered history as the first Arab country to reach Mars, and the fifth country in the world to achieve this achievement, after the "Hope Probe", within the UAE project to explore Mars, succeeded in reaching the Red Planet, capping the first 50 years since its establishment. In 1971, with an unprecedented historical and scientific event at the level of previous Mars missions, where the Emirati Mars exploration mission aims to provide scientific evidence that humans have not previously reached about the red planet.