The planned Federal Insect Protection Act is causing protests among farmers. They receive support from federal states that have already balanced a balance between environmental protection and agricultural interests. Can there be a compromise? 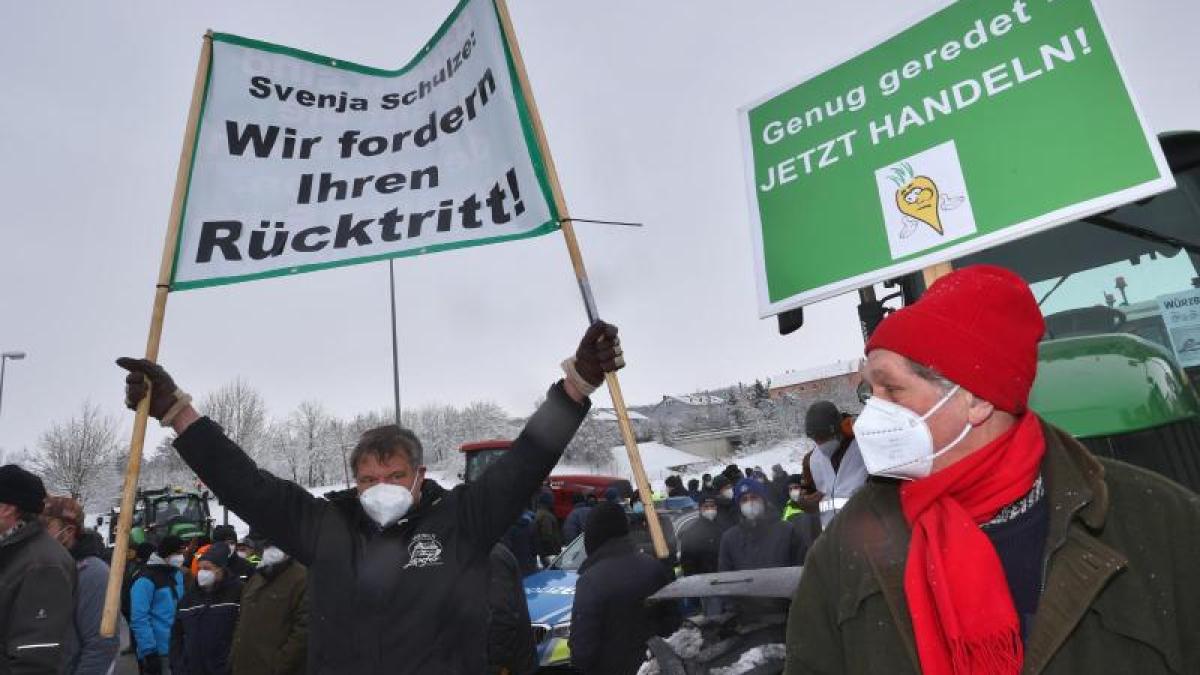 Hanover / Berlin (dpa) - Tough struggle for a compromise on insect protection and the use of chemicals in the field: The law presented by Federal Environment Minister Svenja Schulze (SPD), which is to be passed in the cabinet this Wednesday, has not only ensured for a long time Zoff with Agriculture Minister Julia Klöckner (CDU).

The farmers are also upset and rolled their tractors across Germany to protest on Tuesday.

They fear economic losses due to stricter requirements for the use of pesticides.

The President of the German Farmers' Association, Joachim Rukwied, said: «This law does not help either the insects or the farmers.

On the contrary: it destroys successful nature conservation partnerships and endangers peasant livelihoods. "

There is also cross-party criticism of new bans for farmers who are already under pressure from agrarian federal states.

Instead, incentives should encourage farmers to voluntarily reduce their use of pesticides.

In Lower Saxony and Baden-Wuerttemberg, agreements in this direction are already in danger at state level.

For example, there is a new biodiversity law in Baden-Württemberg as a result of a long dispute between farmers, beekeepers and environmentalists.

The new insect protection package would make this compromise obsolete.

Agriculture Minister Peter Hauk (CDU) protests against the law, he sees parts of the country's viticulture in danger.

The compromise that was sealed by the state government in Hanover with the approval of all parliamentary groups in November, which guarantees farmers compensation for more environmental protection, is referred to as the “Lower Saxony way”.

The plans of the federal government would not make these smart and fair solutions possible.

If the federal government and the Bundestag do not sharpen their resolution after the adoption, necessary changes in the Bundesrat would have to find a majority anyway, said Lies.

In addition to farmers' associations, the agriculture ministers from Baden-Württemberg and Bavaria as well as the Lower Saxony department head previously expressed massive concerns in a letter to the Chancellor.

The state ministries under the leadership of the CDU and CSU (in Bavaria) expressed concern about the legislative plans to ban pesticides, weed killers and insecticides in certain protected areas.

North Rhine-Westphalia's Prime Minister Armin Laschet (CDU) also did not spare criticism at the weekend: "To make it clear here, of course we want to guarantee biodiversity, but it must not be the case that many farms are deprived of their existence."

Because as the President of the Lower Saxony Farmers' Association, Holger Hennies, said, the insect protection regulations could amount to de facto expropriation for some farmers.

"If I work in a nature reserve, I may get a total ban."

In his opinion, that is definitely excessive.

Basically, the concern is that the federal law could nullify agreements already made by the states.

Hennies and his colleagues from the other state farmers' associations are placing their hopes on the Federal Council, which the proposed law has to pass.

It is not yet clear whether the path that is to be taken now is compatible with the "Lower Saxony path" or agreements in Baden-Württemberg or Bavaria.

The lawyers of the federal states checked that. «The Federal Council is the first touchstone.

But if it goes in the direction of expropriation, then a lawsuit is also conceivable, ”said Hennies.

Federal Environment Minister Schulze expressed her conviction at the beginning of the week.

The law is “a very important step towards the conservation of biological diversity”.

A spokesman assured on Tuesday that a compromise had been found with the Ministry of Agriculture.

The package for the Insect Protection Act contains two parts that are to be brought into the cabinet this Wednesday: the Plant Protection Application Ordinance under the leadership of the Federal Ministry of Agriculture and the amended Federal Nature Conservation Act.

At least that's the theory.

In practice, criticism of the Federal Environment Minister does not stop - even from within the ranks.

"The consensus between the state government, agriculture and environmental associations is of great importance," said the member of the Bundestag Marja-Liisa Völlers (SPD) on behalf of the SPD state group Lower Saxony / Bremen.

A mix of regulatory law, voluntary agreements and contractual nature conservation is necessary for insect protection.

The discussion about the Insect Protection Act is followed with concern, the Hessian SPD wants to work for a balance of interests with agriculture on an equal footing, based on the Lower Saxony model.