High school students Lisa Qvistgaard, Agnes Hellerstedt and Anton Möller at Katedralskolan in Växjö love ice cream. When it was time to start your own in the course Young Entrepreneurship, the choice fell on making a vegan ice cream - from leftover avocados from grocery stores in Växjö. 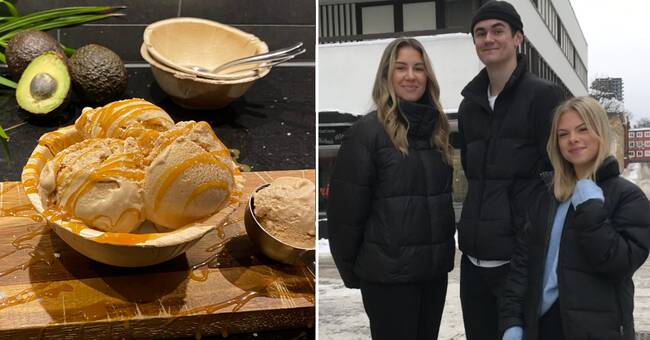 - All three of us like ice cream and we wanted to do something that we ourselves could really stand for.

Ice cream is our thing, says Agnes Hellerstedt, who has the role of salesman in the UF company.

The students pick up avocados in grocery stores in Växjö that do not measure up to being sold, but which are still good enough to make ice cream on.

They then deliver avocados to a local ice cream manufacturer in Alvesta, which handles the actual production.

Hope to be able to start a limited company

The ice cream, which is completely vegan, has already received attention on social media and in vegan Sweden.

Since the project started in August, about 100 packages of ice cream have been sold to private consumers, and about 70 through a local store with vegan food.

The UF company will be wound up at the end of the course in May, but the hope is to be able to start again as a limited company and continue to produce the ice cream, says Anton Möller who manages the finances.

See the UF company tell you more about the ice cream in the clip.