Vaccination summit: Söder - "We have to know when which vaccination quantities come"

The German vaccination campaign has come under massive criticism. Chancellor Merkel is calling together countries and pharmaceutical companies to discuss the problems. Bavaria's Prime Minister calls for more reliability. 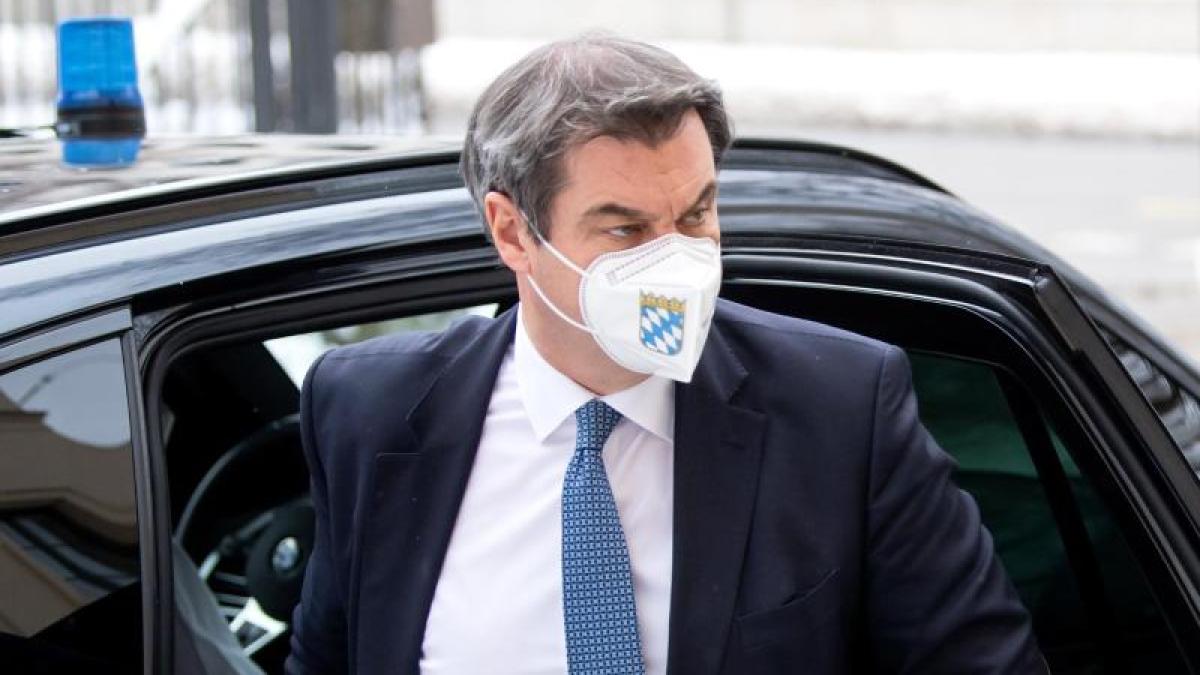 Before the federal and state vaccination summit, Bavaria's Prime Minister Markus Söder (CSU) once again urged that vaccinations against the corona virus be reliable and predictable.

“We need to know when what amounts of vaccinations come,” said Söder on Monday before a meeting of the CSU party executive.

It is "better to have more and faster than later and less" vaccine.

“A back and forth, a stop and go cannot be in the interests of the people,” said Söder.

At the vaccination summit, consideration should also be given to how production capacities could be increased.

It is important that as much vaccine as possible is produced "because it is a real emergency".

Chancellor Angela Merkel (CDU) and the heads of government of the federal states will discuss the problems and the further progress of the vaccination on Monday afternoon.

Representatives of the vaccine manufacturers and the EU Commission also take part in the video conference.

At the weekend, several heads of state government demanded a timetable for the coming weeks and clarity about vaccine deliveries.

"We will need vaccines beyond the summer." It is still unclear whether booster vaccinations are needed.

"Second, it can become possible through mutations that a vaccine also has to be adapted."

Bayer wants to get involved in the production of the not yet approved vaccine from CureVac.

CureVac boss Franz-Werner Haas promised several hundred million doses of the vaccine by the end of the year.

By expanding the existing production network, it would now be at least a billion.

Spahn said he did not expect the vaccination sequence to be changed with the AstraZeneca vaccine.

The Standing Vaccination Commission (Stiko) had only recommended the use of the vaccine for people aged 18 to 64 years.

There are also many people of this age in the first prioritization group of the vaccination ordinance with nurses, stressed Spahn.

In the run-up to the summit, FDP boss Christian Lindner called for an end to the accusations and concrete steps to speed up the corona protection.

For accelerated deliveries of vaccines, the state should rely on market competition, Lindner told the dpa news agency.

“That's why many economists recommend a Tempo premium for expanding production.

There must be an incentive for the industry to create additional capacity, ”he said.

The public administration should undertake to accelerate the processing of all permit applications for new plants.

"The demands from the CSU and the Greens for a state-controlled emergency economy should sound impressive, but they do not solve any problem," said Lindner.

"They are more of a distraction from the fact that it was government failure in procurement." If you see the immense cost of the lockdown, then an investment in accelerated capacity expansion in vaccine production is worth all means.

Expectations were raised over the weekend.

CSU boss Söder had requested a “reliable delivery schedule” for weeks and even months for the coveted vaccines, and Green chairman Robert Habeck had asked for an “emergency vaccine industry”.

As a precaution, the federal government had dampened expectations.

If the proposal helps, it should also be on the table at the vaccination summit, said Klingbeil on Monday on Deutschlandfunk.

But he believes "that these are populist proposals that such things ultimately lead to legal disputes with companies."

He spoke out in favor of strengthening cooperation and financial support from the federal government.

"But I think these threatening gestures don't work so far."

"And now I expect companies to accept their duty to help in this global crisis."

The summit is supposed to clarify some questions: What is the current state of affairs?

What are the prospects?

The fact that vaccines are now so rare is neither sudden nor surprising.

"We have to get through the winter without being able to rely on the fact that we already have a large number of vaccines available," Merkel had already warned at the beginning of December.

But now the problem is becoming very tangible.

"It is all the more important for the federal states that we know exactly when and which deliveries can be expected so that we can plan better," demanded Michael Müller (SPD), Berlin's governing mayor and head of the conference of ministers of the ministers.

So far, over 3.5 million cans have been delivered in Germany.

Some countries store the vaccine first in order to have it safe for the necessary second syringe, while others administer everything at once, trusting future deliveries.

The third vaccine, that of AstraZeneca, was approved on Friday.

According to the Ministry of Health, another five million vaccine doses or more will be delivered to the countries by February 22nd.

One thing is clear: it depends on the manufacturing capacity.

The role of the manufacturer

With all due respect for the historically fixed development of the corona vaccines, the providers are under closer observation.

Biontech and its US partner Pfizer caused annoyance at the federal and state levels with a short-term announcement that they would temporarily deliver less due to factory renovations - even if this should make greater production possible.

There are great expectations for a new Biontech plant in Marburg.

The EU Commission had a sharp dispute with AstraZeneca: A good week ago, the British-Swedish group surprisingly announced that it would deliver only 31 million doses of vaccine to EU countries in the first quarter instead of 80 million.

The outrage was great, on Sunday AstraZeneca then promised to deliver nine million more cans, so a total of 40 million cans, as announced by EU Commission chief Ursula von der Leyen.

Now Söder demanded: “We have to be able to produce more.” Habeck wants all pharmaceutical companies to co-produce vaccines according to their capabilities.

But Spahn has already warned: "Vaccine production cannot be set up in four weeks." There is already cooperation between pharmaceutical companies.

For example, the pharmaceutical company Sanofi plans to deliver more than 125 million doses of the Biontech vaccine to the EU from the summer.

To this end, plants at the Frankfurt-Höchst site are to be converted.

Bayer and CureVac are another example of a collaboration between a pharmaceutical company and a vaccine developer.

Significant quantities of vaccine have been contractually reserved for Germany this year.

But they don't come all at once.

And especially with the small amounts at the beginning, even slight deviations can mess up vaccination dates.

More should be delivered in the second quarter, and even more in the third.

Provided that everything goes as planned by then.

According to the Ministry of Health, more than 90 million Biontech cans, 50 million from the manufacturer Moderna and 56 million from AstraZeneca are specifically secured.

The consequences of vaccines that have not yet been approved could be 37 million doses from Johnson & Johnson, 53 million from CureVac and possibly 55 million from Sanofi / GSK.

The on-site vaccinations are run by the federal states, and some are further than others.

A total of more than 400 regional vaccination centers should be ready, but it is far from full.

Appointments are gradually being offered.

Those who want to be vaccinated are often frustrated because many cannot get through on telephone hotlines.

The statutory health insurance physicians asked for patience and assured them that a “race” for appointments was not necessary.

Callers in most countries are directed to call centers via their nationwide number 116 117, which answer questions about vaccinations and, in some cases, arrange appointments.

You can usually do this online too.

But there are regular messages such as "Currently no vaccine available - no further vaccination appointments can be booked at the moment".

The Rhineland-Palatinate Prime Minister Malu Dreyer (SPD) complained about shaky announcements - the delivery quantities for Moderna were lower than announced, at AstraZeneca there was a right to change.

Reliable appointments are so impossible.

The Saarland is pragmatic - with a joint appointment for several people who want to be vaccinated.

The impatience is great - because the hope is: the more vaccinations there are, the fewer everyday restrictions are necessary.

For Federal President Frank-Walter Steinmeier, they are “the decisive light at the end of the tunnel”.

Spahn has marked out intermediate stages: all nursing home residents should receive a vaccination offer by mid-February.

All over 80-year-olds should have received a vaccination offer by the end of March.

Little by little, other groups should be able to be vaccinated - but the order is still discussed.

Perhaps in the summer the vaccinations could then be transferred to the doctor's offices and move forward across the board.

Merkel affirmed that if everything worked out, everyone could be offered a vaccination "by the end of summer".

And the summer goes on calendar until September 21st.

That would also be in time for the general election on September 26th.

The German situation in comparison

In Israel, Great Britain and the USA, for example, more people per inhabitant have been vaccinated than in Germany.

The Biontech preparation was approved in Great Britain at the beginning of December, and the AstraZeneca product that can be used in practices is already being injected there.

There are fewer major differences in the EU countries.

Vaccinations are unevenly distributed around the world.

According to the World Health Organization (WHO), around three quarters of the doses have so far been injected in ten countries.

WHO chief Tedros Adhanom Ghebreyesus warns that it is not right for younger adults in rich countries to be vaccinated before the elderly and health workers in poor countries.

Experts also warn of setbacks in the pandemic due to vaccination nationalism: Virus mutations resistant to the vaccines could arise above all in countries where there is little vaccination.